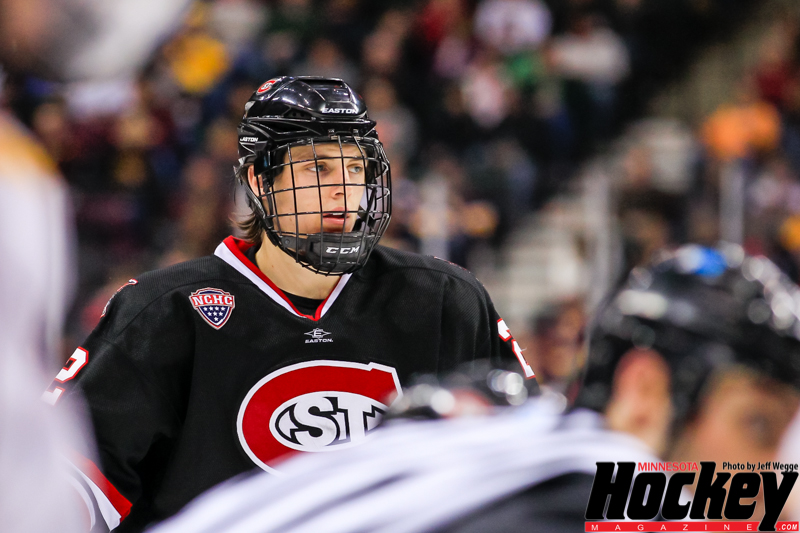 ST. CLOUD – As Jonny Brodzinski put it, the hockey gods were looking down Friday night.

The St. Cloud State junior saw one of his better shots ring off the post after he split the goalie’s pads.

On the two goals he scored, Brodzinski threw the puck off an opponent’s back and batted another puck out of the air.

“I put one between the goalie’s leg and it hits the pipe, then (Joey) Benik hits the pipe,” Brodzinski said. “Then one goes in off the breezers and another one out of the air.”

North Dakota is one opponent Brodzinski has had success against in his career, but Friday night at the Herb Brooks National Hockey Center might’ve been his most influential game against UND.

The Blaine native scored the last two goals of SCSU’s 3-1 win and became the 18th player in school history to reach the 50-goal mark having entered with 48.

Brodzinski’s achievement took him by surprise when a reporter asked him about it following the game.

“I didn’t know it was my 50th,” said Brodzinski, who has five goals and five assists in nine games against UND. “It’s pretty special, I guess.”

Brodzinski recently moved from his wing position to center, where the transition seems to be moving smoothly.

He had one goal through nine games as a freshman and one through eight games as a sophomore, but this year Brodzinski has seven goals through 11 games.

“He’s getting chances and that’s the big thing,” Huskies coach Bob Motzko said. “I don’t know how many shots he had tonight but it looked like he had a whole pile of them.

“I love how he’s embraced playing center. Now he has to work hard on both ends of the ice and that’s the transition.”

Motzko put Brodzinski on the top line between Joey Benik and David Morley before last weekend’s series at Western Michigan.

“I played center most of my life growing up but it was a little bit of a transition since I played wing my freshman and sophomore seasons,” Brodzinski said.

“The whole defensive side of it is still a little cloudy.”

Ethan Prow, a senior from Sauk Rapids, put SCSU on the board on a shot that ricocheted off two sticks and past UND goalie Zane McIntyre 5:10 into the second period.

Brodzinski had the first assist on the goal, but Drake Caggiula tied the game eight minutes later for his sixth goal of the season.

Luck finally found Brodzinski when a wrist shot through traffic bounced off UND forward Stephane Pattyn’s back and into the net 1:38 into the third period.

Brodzinski and Benik are linemates in even-strength situations but they hooked up on the power play to put the Huskies up two goals.

Benik spent a good chunk of SCSU’s offensive zone time on the power play trying to feed Brodzinski. When Benik got a pass off, a UND defender got his stick on the puck, forcing the puck to pop up to Brodzinski.

“It probably wasn’t the best pass but the defender was coming at me so I had to get it over his stick,” said Benik, a junior from Andover. “It kind of grenade on me, but Jonny used had a good hand-eye to put it in.”

Brodzinski took a baseball swing and knocked the puck into the net at the 9:43 mark.

“In their terms, that goal was sick,” Motzko said. “You knew right away that was a good goal. You didn’t have to review it. That’s what made it a ‘wow’ goal.”

“I knew he was going to get it over to me, I just didn’t know where it was going to be,” Brodzinski said. “It popped up in the air and I just tried to get a stick on it. Luckily it hit the pipe and went in.”

Brodzinski and the Huskies hope the good fortune carries over into Saturday’s 7 p.m. series finale in St. Cloud.