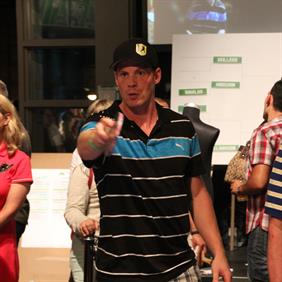 Stephane Veilleux may have taken home the winner’s trophy from Smashfest 2013 in Toronto, Ontario, Canada but the ultimate winners are the charities on the receiving end of the over $100,000 raised throughout an evening of fun and ping-pong with some of the NHL’s biggest names! 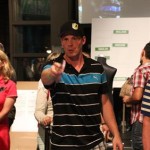 Thursday evening some of the NHL’s biggest names stepped back into competition against one another, but instead of picking up hockey sticks they picked up ping-pong paddles and volleyed back and forth for charity. Smashfest 2013 was held at the Steam Whistle Brewery in Toronto, Ontario, Canada and was hosted by New York Rangers Forward Dominic Moore and the NHLPA.

The event raised over $100,000 for concussion research and the Katie Moore Foundation – in honor of Dominic Moore’s late wife who passed away from a rare liver cancer in January – which provides advocacy for families going through similar situations as the Moore family and plays a role in cancer research.

While the big winners of the evening were ultimately the families and charities that will benefit from the money raised, there was also a ping-pong champion. All evening players predicted that the winner of the event would be the Wild’s own Stephane Veilleux and after multiple elimination rounds he was indeed the winner of the tournament!

Says Veilleux, “I think first it was a great time and we all did it for a good cause and I think that’s the most important thing. To win was amazing and to meet so many good people was such a good time!”

Veilleux also commented on the importance of the event saying, “It’s amazing at an event like this! People get educated and realize how great of a cause it is and I think that it’s amazing to see everyone taking pride [in it] and drawing some money for a good cause!”

The Quebec native also commented on his preparation for the ping-pong tournament, “To be humble I played tennis at a young age and it helped me out with my ping-pong practice and skill-set. Just happy to have a good time and happy to spend time with such great people!”

Teammate Zenon Konopka was also present at the event and took a moment to comment as well. Says Konopka, “I think its a great cause and I really truly believe there should be more events like this where there is interaction with fans and we’re able to raise money for a good cause. It’s a real win-win.”

While he wasn’t very happy with his overall ping-pong tournament showing he was happy to share his plans for future charity involvement. “We have a charity wine, zkwines.com and we raise a ton of money for concussion research through that and we’re really intertwined with them. They are one of the charities tonight so that’s great!”

We’ll have more coverage of your favorite players in multiple upcoming events including the Defending the Blue Line charity hockey game on August 3rd as well as the NHLPA charity golf classic in Ontario, Canada on July 30th!

For up to date photos and live feeds from events give the author @AmySnow17 a follow on twitter as well as @MNHockeyMag!