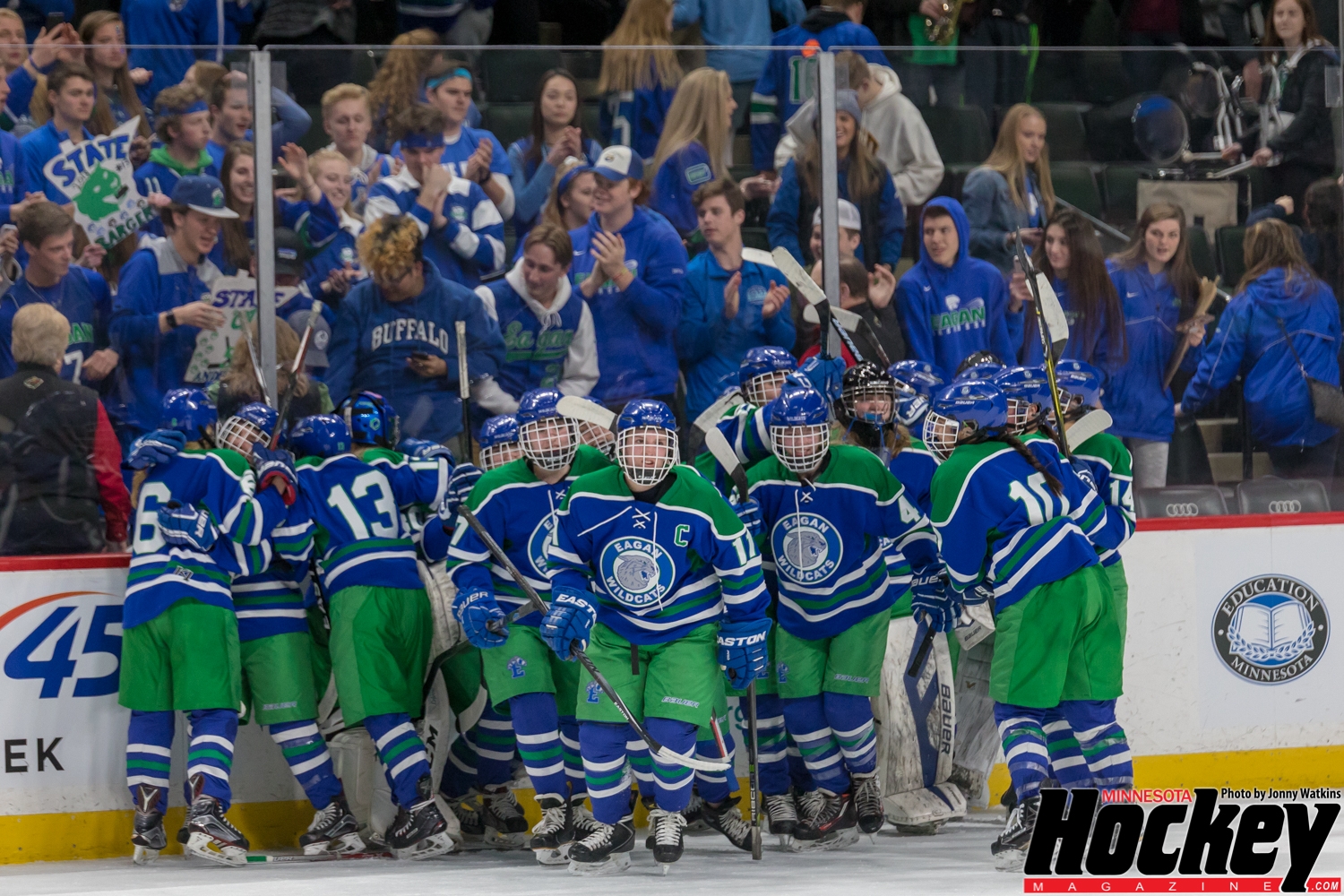 No. 2 Centennial vs. Lakeville South 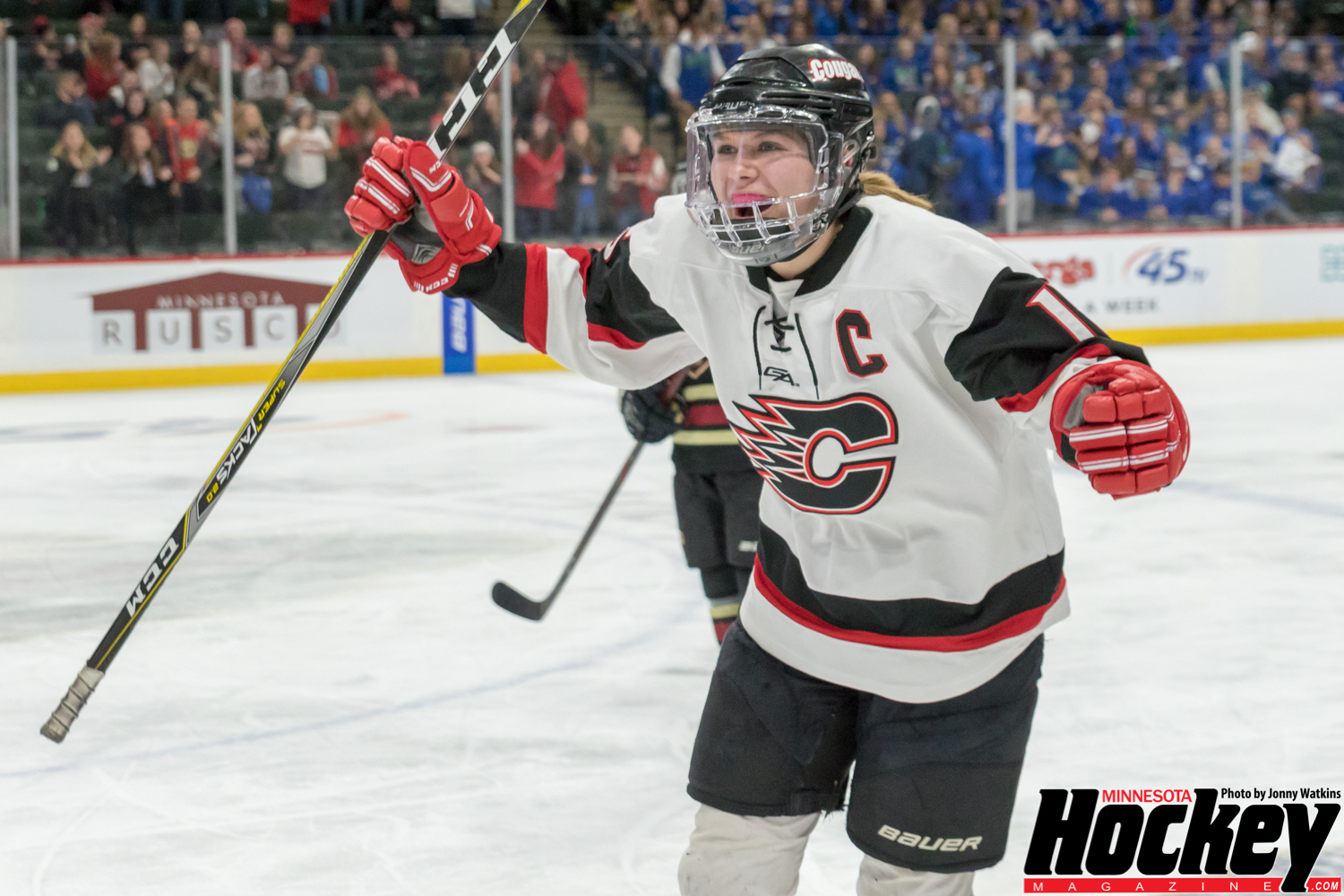 Class 2A began with a battle of two felines as the No. 2 Centennial Cougars took on the unseeded Lakeville South Cougars. Although Centennial averaged nearly five goals per game, it was their defense and timely play that lifted them to a 2-0 win and a birth to the semi-finals.

“I mean I was kind of expecting this,” said Centennial head coach Kristi King. “Their goalie’s incredibly good and hats off to her, she made a lot of good saves. I thought we did a great job of creating offense. Our first period wasn’t great but second period we doubled our time on attack and we did everything we needed to and outshot them. So kind of feeling it out in the first period and figure out what we do well and execute that in the second and third. We knew if we kept shooting and crashing the net hard, the goals will come.”

Centennial spent the majority of the first period on its heels. Lakeville South came out the gate with a solid forecheck and was able to put seven shots on net in first 10 minutes of play.

But the momentum began to swing Centennial’s way after they drew a power play. Shortly after the advantage expired, sophomore Allison Pitlick netted the game’s first goal, with assists to senior Anneke Linser and junior Maija Almich. Despite being outshot 11-6, Centennial led 1-0 heading into the first intermission.

“First period period I think for everyone but especially me, it was like, taking it all in and the atmosphere was incredible,” said Linser after the win. “You couldn’t even hear yourself think in the roaring of the fans and seeing your whole community out there, you wanted to do it for them and I think getting the nerves out of the first period and coming back and regrouping with the team was a huge part of our success in the second and third.”

Centennial got off to a much better showing in the second period firing 18 shots on net. However, Lakeville South goalie Lexi Baker didn’t skip a beat. She stopped all 18 shots that came her way and kept it a one-goal game.

Lakeville South came out for the final period of regulation the way they did in the first: with speed, an aggressive forecheck and plenty of rubber on net. Yet, they could not crack goalie Mackenna Storteau who was absorbing every opposing blast and pitched a 15-save shutout. In the closing the minutes, Centennial would get an insurance goal from Linser with assists from senior Gabbie Hughes and Almich.

“That’s a powerful team,” said Lakeville South head coach Mark Johnson. “They do a lot of misdirection and changing the puck around they control it very well. They’re a hard-working team. Those two girls: Linser and Hughes are backed with a couple good players also and they played well. I look forward to seeing them going far.” 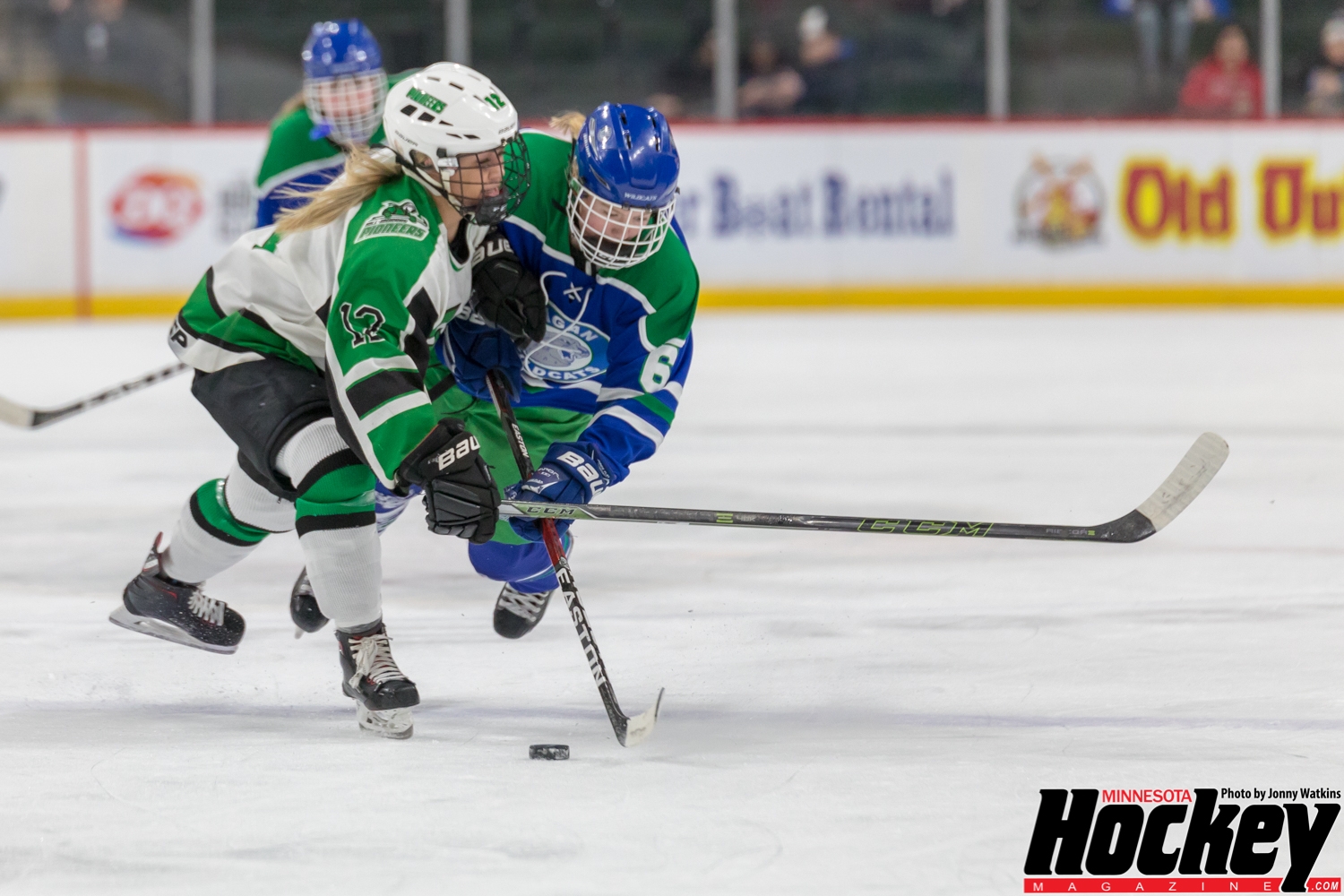 The Eagan Wildcats returned to the state tournament for the first time in six years but faced a tournament juggernaut in the Hill-Murray Pioneers. It was the seventh consecutive year Hill-Murray has made the Tourney, with the team capturing championships in 2014 and 2015.

But there won’t be any banner for the power house this season, as the Wildcats knocked off the Pioneers 2-1 and advanced to the semi-finals.

After a scoreless first period, Eagan was able to strike first with a pair of goals in the second period. While on the power play, sophomore Jenna Ruiz dangled through the slot and put a puck top shelf giving her team a 1-0 lead. As time winded down, the Pioneers tried to clear the zone but they threw it right on the tape of Eagan’s Taylor Anderson and the senior capitalized and scored, giving her team the 2-0 heading into the second intermission.

“I’m thinking first of all ‘shoot the puck, Taylor’ as I always am,” said Eagan head coach Dan Wilson “As she always wants to get a little bit closer to the net. Obviously it worked out in our favor at that point.”

However, Hill-Murray came out swinging in the final period of play and it appeared they cut the deficit to one goal. However, upon video review – which is only allowed in state tournament play – junior Katie Kaufman clearly kicked the puck in and the goal was waved off. But the Pioneers would get one shortly after when freshman Kennedy Morris blasted a puck from the top of the point.

“Sometimes it’s difficult to cling to that type of lead against a team like that,” said Wilson “Obviously going into the third period we just talked a lot about taking care of puck and get the puck down deep, don’t take any big time risks and chances. We obviously knew that they got some high-scoring power. So we really talked about kind of packing our house and packing in front of our net to keep everything to the outside. I actually think we did a pretty good job with that and it really obviously helped us.”

Eagan continued to weather the storm as Hill’s offense wouldn’t let up. At one point, the Pioneers were outshooting the Wildcats 11-0, with Eagan not registering their first shot of the period until the 11-minute mark. Despite being heavily outshot, the Wildcats prevailed with goaltender Maddie Nickel making 26 saves in the contest.

“You know it’s tough to know what to say. For one, it’s never happened before so I never had to have that speech before,” said Pioneers head coach Bill Schafhauser. “If we could’ve played the first two periods like we played in the third, we might’ve had a different outcome.”

No 1 Edina vs. Brainerd 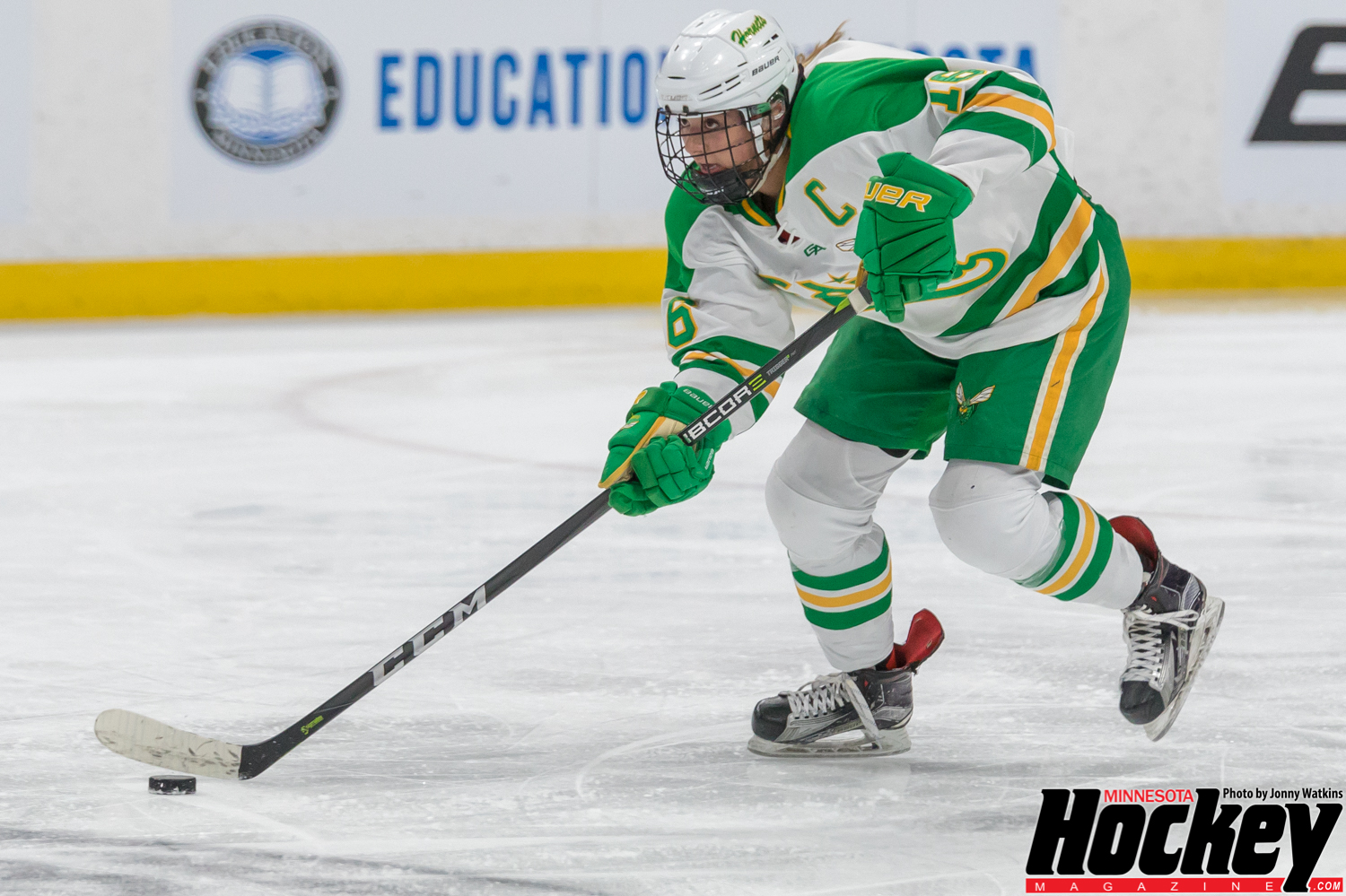 Defending Class 2A champion Edina with a large cast of returnees from 2017’s title run welcomed Brainerd to its first-ever state tournament in the opening game of Thursday night’s evening session. The welcome was short lived, however, as the Hornets treated the Warriors to 4-0 defeat to snap Brainerds seven-game winning streak.

Edina goaltender Megan Smith stopped all 10 shots she faced for the shutout while Brainerd’s Nicole Schulz stopped 28 of the Hornets’ 32 shots.

Oden opened the scoring just 2:02 into the game with her 32nd of the year. Later in the period a pair of Brainerd penalties 28 seconds apart gave Edina a 1:32 5-on-3 advantage.

Even down two players, though, the Warriors threatened when Cheyenne Abear and Gabbie Smith nearly connected on a 2-on-1 with the puck just out of Smith’s reach at the right post.

Shortly thereafter, Jungels scored her fifth of the year to make it 2-0 with just five seconds remaining in the two-player advantage. The Hornets picked up another power-play goal midway through the second when Bowlby notched her 28th of the season for a three-goal Edina cushion.

Swaim’s goal with 53 seconds left in the second, her ninth of the year, preceded a scoreless third period.

Edina coach Sami Reber expressed relief at advancing despite the heavy odds in her team’s favor entering the game.

“I think when you have quite a few players coming back to the state tournament who were here last year it definitely helps, there isn’t as many nerves throughout the entire team,” Edina coach Sami Reber said. “But you never know what your going to get at the state tournament … so the first game’s always a tough one and I’m proud of the way we came out of that.” 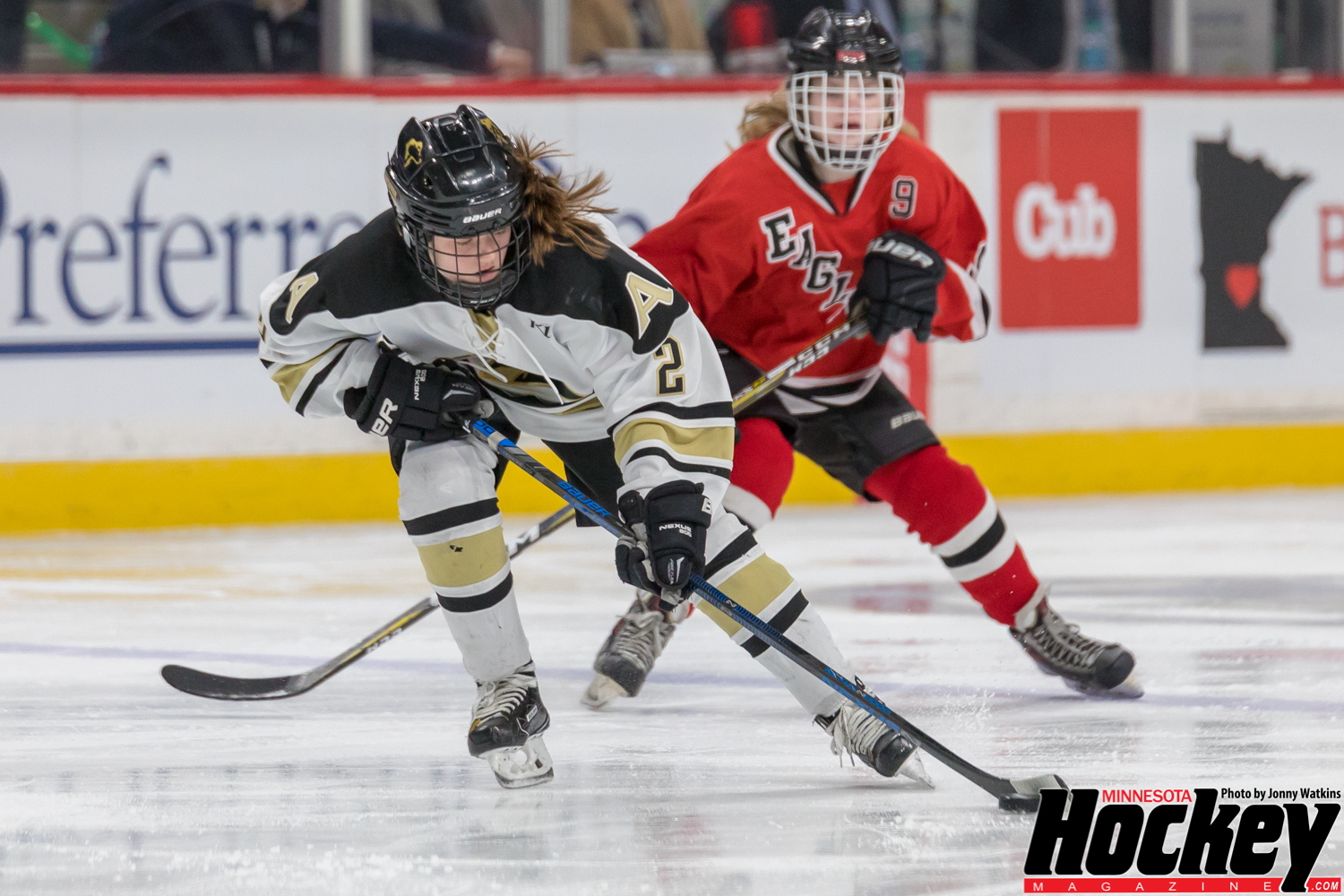 The Huskies and Eagles played up to their seeding in a tightly-contested game in the quarterfinal nightcap.

The game was scoreless through two periods but Eden Prairie’s Crystalyn Hengler broke the tie just 1:15 into the final period, firing a wrist shot through traffic that Andover goaltender Cassidy Stumo said she couldn’t see.

“I thought I was out far enough but maybe, because of my size, I should have been out a little further,” Stumo said.

“Pretty big goal for us at a time where I was thinking we might be here until one, two in the morning,”Eden Prairie coach Jaime Grossman said. “So it was nice to see that go through.”

Hengler scored her 19th goal of the season using a brand new limited edition stick which replaced an identical one she had recently broken.

“She had like three goals in eight games with it and it broke at practice the day after a game. The new one that they ordered came today. Looks like that stick’s a good stick for her.”

Eden Prairie’s Becca Kniss capped the scoring with an empty-net goal with 1:22 to play.

The story of the game was the stellar goaltending battle between Stumo and Eden Prairie’s Alexa Dobchuck who each finished with 29 saves.

“I think we could have done a little better job of getting on pucks a little bit harder,” Andover coach Melissa Volk said. “We did a good job the first 10 minutes of the game and, after that, kind of let off.”

The Huskies came out flying to start the game, applying intense pressure on Eden Prairie early on. But Dobchuk withstood the barrage and the Eagles weathered the storm.

“We’ve been a team that’s been a little slow out of the gates at times most of the year but it’s always nice knowing Alexa’s back there because we have confidence,” Grossman said. “Our kids have confidence that no matter they do those first few minutes, she’s got our back until we calm down.”

Eden Prairie (19-9-1) and top-seeded Edina (26-2-1) will play Friday night’s second Class 2A semifinal for the right to play for a state championship. Andover moves to the consolation bracket for a semifinal meeting with Brainerd.