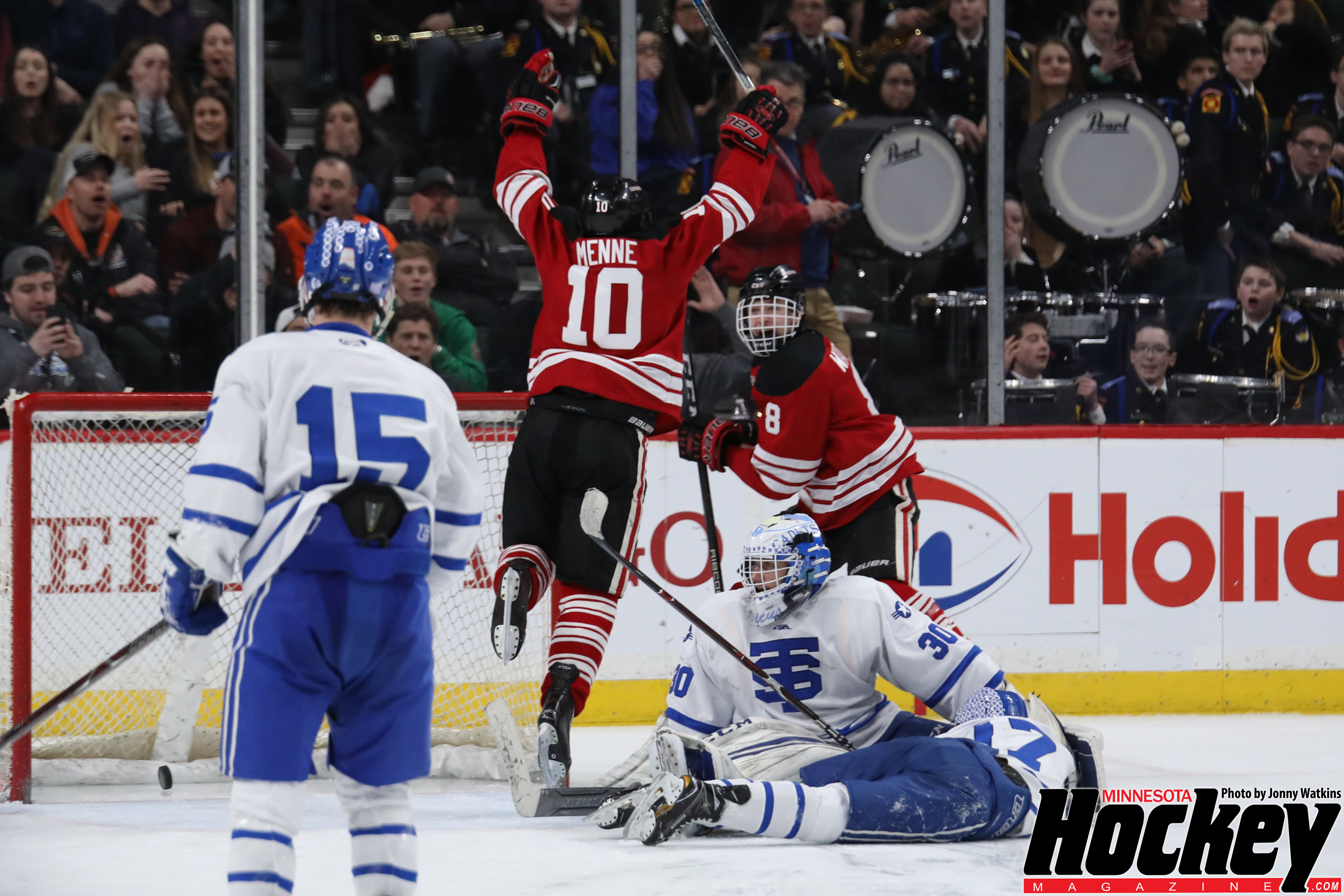 No. 1 Edina vs. Lakeville North

It was hard to tell if the Class AA quarterfinal matchup between the Lakeville North Panthers and Edina Hornets was a hockey game or a track meet.

It was as if Edina had rockets glued to their skates in their 7-1 win over Lakeville North.

Edina’s top line of Sammy Walker, Jett Jurgens and Mason Nevers have been terrorizing opponents with speed and goals all season. Every time the trio headed towards the net, Lakeville north just couldn’t keep up with them.

“You just can’t teach speed,” Nevers said who finished with two goals in the win. “When you can outskate teams for three periods it’s really special.”

Panthers coach Trent Eigner was well aware just how dangerous Edina can be with open space.

“You give a really good offensive team and you make them comfortable and loose, (I mean) good luck.” 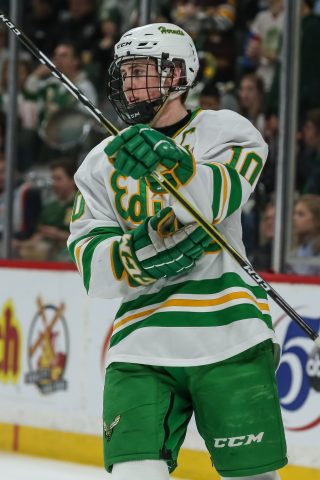 Edina senior Sammy Walker put on a clinic. With incredible quickness and a compass for the net, Walker was orchestrating offense all game long. He finished with five points points: one goal and four assists. With his team on the penalty kill, Walker skated coast-to-coast, deked out an opposing player at neutral ice and skated in untouched to beat Panthers’ goaltender Will Johnson to put Edina up 3-0 in the first period.

“The D stepped up on me, so I didn’t have a lot of options,” a humbled Walker said. “I just kind of threw it out to the middle and beat him to the puck and then the rest is history.”

Walker was drafted by the Tampa Lightning in 2017 NHL Draft and will also be playing college hockey for the University of Minnesota this fall.

Jett all the way

Walker’s linemate Jett Jungles is also having a phenomenal season. He came into the tournament with 23 goals and the junior ended up netting two more to go along with two assists in the team’s win. His first came on the power play and his second tally was on a 2-on-0 with Walker feeding Jungles a puck which he rifled to the back of the net.

“Yeah I was really picking if I should pass it back or not,” Jungles said. “Because I was like, I should give Sammy a goal – but I just got it and we both finished it off. It was a good play by Sammy.”

Like Walker, Jungles will also be playing college hockey, but at Northern Michigan. However he isn’t expected to join Grant Potulny’s Wildcats until the 2019-20 season.

No. 3 Duluth East vs. St. Michael-Albertville

The Duluth East Greyhounds marched to a 5-0 win over the St. Michael Albertville Knights in the quarterfinal round.

A potent offense and stellar goaltending set up the Greyhounds for a date with the Edina hornets in the semifinal round. 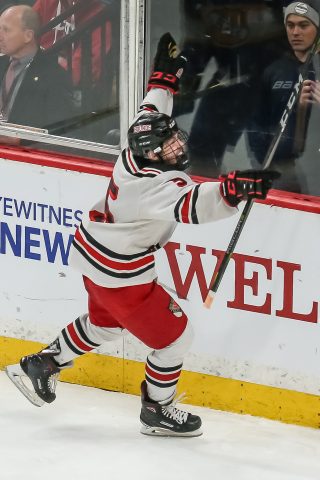 Worth has been scoring goals all season long. Entering the tournament, Worth, a finalist for Mr. Hockey, had 42 goals in 28 games this season. So go figure he that the senior continued his scoring trend with a hat trick. His first goal was a snipe from the slot, his second goal came when he buried a loose puck in front of the crease and his third was a tipped slap shot. It was a little bit of everything.

“To see that first one go in right away, I think that’s what jump started us,” Worth said. “We came out a little flat to start the game and we weren’t getting much chances and much quality looks. We stuck with it and Kleive came up big in the net and the puck started filling in for us.”

Obviously Worth and the Greyhounds offense was essential to the team’s win, but you have to give credit to Duluth East netminder Parker Kleive who pitched a shutout making 28 saves. Greyhounds coach Mike Randolph had high praises for his goaltender to make up for the team’s slow start.

“He earned that shutout,” Randolph said. “We were sloppy in a lot of areas of our game. I thought we came out a little anxious. And I thought as the game went on and we got stronger and stronger.”

It’s not exactly a secret that some fans pick on other schools who have a slew of students that come from high-income families. Which is exactly what was on Worth’s mind when asked why he’s excited to take on Edina in the semifinal round.

“It’s going to be an exciting game. I mean It’s Edina vs. East in the Xcel there’s nothing better than that,” Worth stated, with a big grin on his face. When asked to expand on that he replied, “It’s East and Edina, you kidding? It’s the cake from the north and cake from the south.”

The Skippers scored early and then often, particularly in the first period, and cruised to a 6-2 win over the Pioneers.

Sophomore Bobby Brink scored twice as seven different Minnetonka players found their way to the score sheet. The two teams combined for three shots on goal in the first 5:53 of the game with all three finding the back of the net. 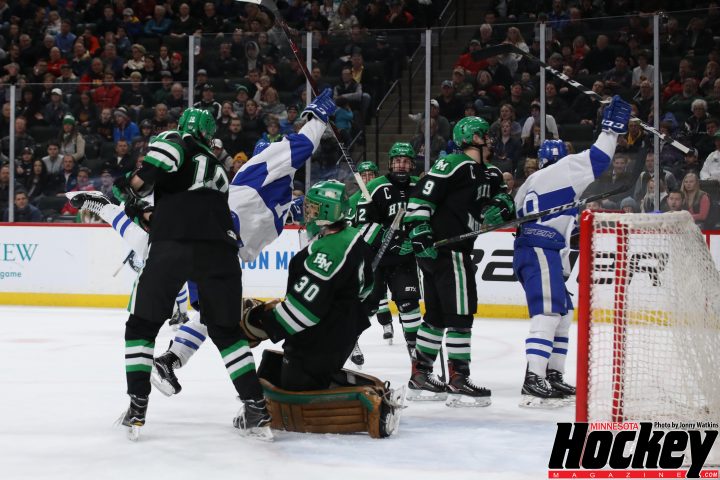 Not to be outdone, the Skippers showed they could play the quick answer game and beat the Pioneers at it in the process.

Sophomore defenseman James Miller’s goal 1:34 later to put the Skippers back out in front for good.

“One of our statements is, you’ve got to work harder after a goal, and that was disappointing,” Lechner said. “Hats off to Minnetonka, they worked harder after we scored.”

In the second, Hill-Murray’s Joseph Quast cut the Skippers’ lead to two with a sharp angle shot from the goal line to Glockner’s left at the 6:04 mark. But it took Brink just 25 seconds to score his first goal of the game for a 5-2 Minnetonka lead.

“We’ve been doing that all year,” Goldsworthy said. “I think we have resilient kids and we’ve been preaching next shift all year, whether we score or we get scored on.”

Miller’s goal was the first of his varsity career and he celebrated accordingly. Teammate, and fellow defenseman, Grant Docter, was among the happiest Skippers to be there the see it.

Docter and defense partner Josh Luedtke finished with three assists each, sharing assists on three of Minnetonka’s goals to give the Skippers’ blue line a seven-point night. The duo finished plus-4 on the night and were not on the ice for either Hill-Murray goal.

Brink’s shorthanded goal with 59 seconds to play was the 14th such goal for the Skippers this season against just 12 power play goals allowed. Minnetonka notched its 27th power-play goal of the season on Luke Loheit’s tally midway through the opening period.

The Skippers kept the Pioneers scoreless on three power-play opportunities, including a five-minute major boarding penalty to Loheit early in the third.

“We’ve got some kids, if you give them some space in an odd-man situation, you can score some goals,” Goldsworthy said.

Goals by Cade Huntley and Ben Stucker gave St. Thomas Academy a two-goal lead after one period and the Cadets appeared to be in control after goaltender, and Frank Brimsek Award finalist, Atticus Kelly withstood an early surge by Centennial. But appearances are deceiving according to Centennial coach Ritch Menne.

“Even if it had gotten to 3-0 I don’t think our guys were panicked,” Menne said. “We’ve got some firepower, we’ve got some great goaltending, we’ve got great defensemen and it’s an extremely tight group of players that truly love one another.”

After Carter Wagner got the Cougars on the board in the second, Jack Menne’s shorthanded goal midway through the third tied the game at 2-2. Then with just 3:32 left in regulation, Hayden Brickner pounced on a rebound and fired a shot past Kelly for Centennial’s first lead.

“I think it got down to almost what goalie was going to make the last big save,” St. Thomas Academy co-coach Greg Vannelli said. “When they made that save on the first shift of the third period, on a 2-on-1, that was huge and then for us to give up a shorthanded goal … those two things, I think, decided that third period.” 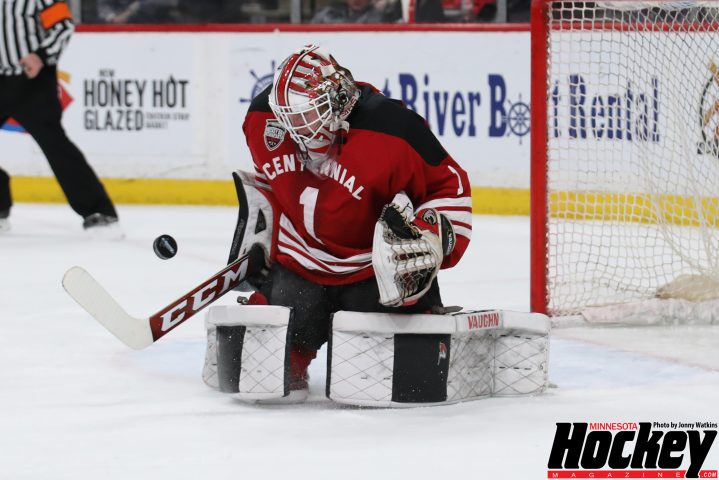 The save Vannelli referred to was Centennial goalie Travis Allen’s tremendous stop on STA’s Ray Christy just 30 seconds into the third period.

“Just saw white [jerseys] and did a quick prayer,” Allen said when asked what he remembers of the play.

Allen, who split time with Bryce Crowley in the Cougar crease this season, stopped the final 24 shots he faced and 33 overall to give his team a chance. “We’re not sitting here this season if he hasn’t been as great as he’s been,” Jack Menne said of Allen.

Centennial came to St. Paul with an 0-3-1 record against tournament participants, losing to Duluth East and twice to Edina while tying Hill-Murray. That changed on Thursday and the Cougars have a chance to add to that win total against Minnetonka on Friday night.

“Our guys are battle-tested, they’re resilient, they’re positive, they support one another,” Ritch Menne said. “It’s a terrific group that’s had success all the way up and maybe they’ll get a little recognition after tonight.”