‘A good game in her’ 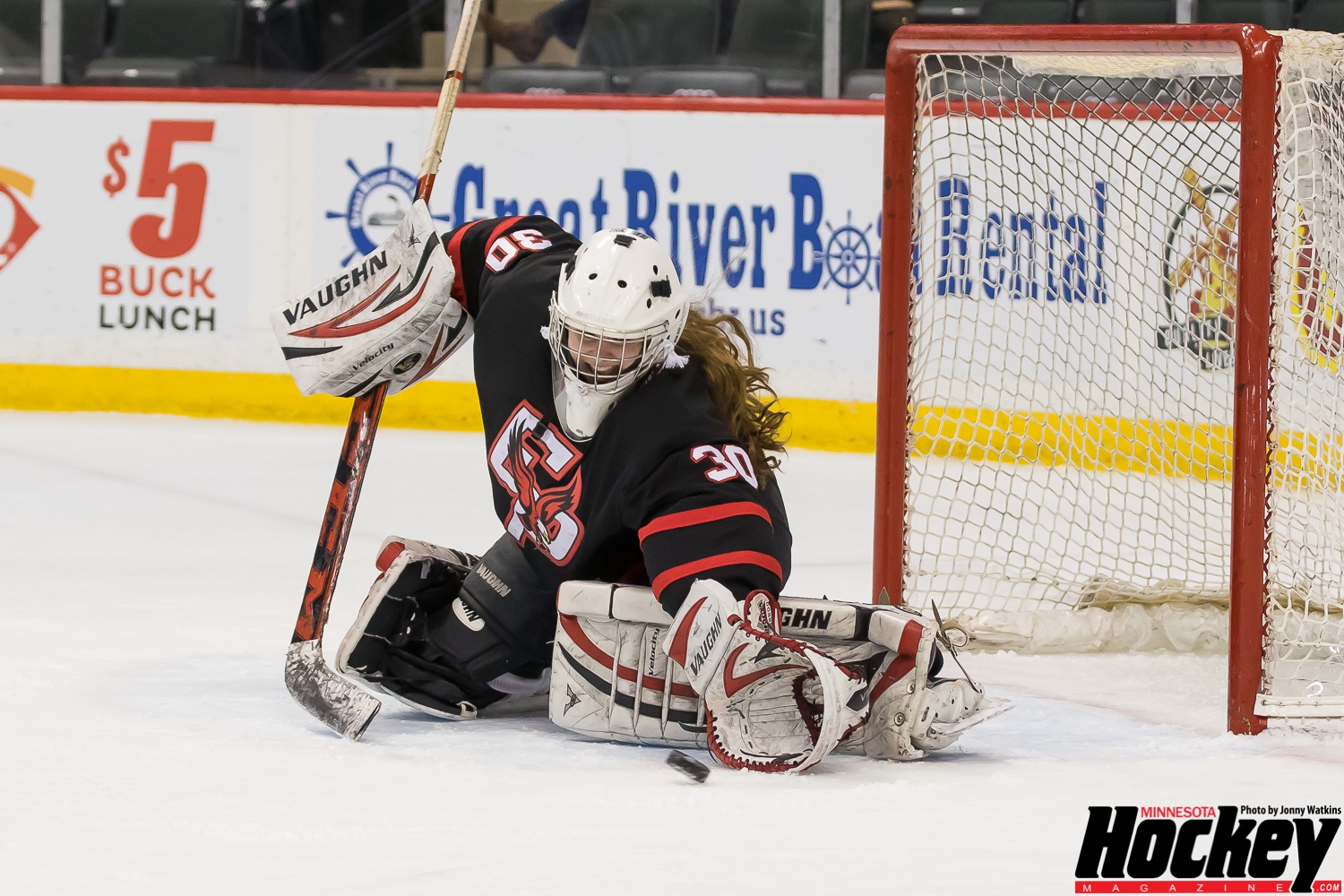 St. Paul – Eden Prairie coach Jaime Grossman can usually sense in warm-ups what kind of night his main goaltender, sophomore Alexa Dobchuk, is going to have in the goal crease.

Friday was one of those times he knew things were going to go well.

His coach intuition proved correct as Dobchuk earned a 1-0 shutout in a No. 3 seed Eden Prairie Eagles (21-7-2) victory over No. 2 seed Edina in the Class 2A semifinals Friday night at Xcel Energy center. The Eagles are looking for their third state title. They won state championships in 2006 and 2008.

One thing that sets Dobchuk apart from other goalies, according to her coach, is that she always has a plan for the puck.

“The way she puts rebounds exactly where she wants them,” Grossman said.

For Dobchuk, facing a top team like Edina left her with the feeling of needing to be prepared for anything.

“You have to expect a shot,” she said. “You always have to be on top of your game.”

The lone goal of the game came at 5:14 of the second period. It started with an offensive zone faceoff win from eighth-grader Sydney Langseth that sent the puck on goal. Senior Kelly Wolfe was right there for the rebound and put it into the net to the sliding Edina goaltender’s right.

“I guess what I saw was a rebound and an open net,” Wolfe said. “So I just got the opportunity.”

The Eagles hung onto that lead until the final buzzer sounded and they ended up in a celebratory pile near Dobchuk in goal.

“It always feels good being at the bottom of the pile,” Dobchuk said.

The Hornets pressured heavily in the second period, especially in the closing minutes, as they tried to tie the score. There were some grade A scoring chances end-to-end, leaving the teams knotted at 12 shots on goal apiece with about four minutes left in the second. Then Edina took control and had a 20-12 shot advantage by the second intermission. The shot difference in the second frame alone was 17-8 in favor of the Hornets.

Dobchuk came up with save after save on initial shots, rebounds and players crashing the net to keep her shutout alive.

“As I’m playing, I like to stay calm and support my team,” Dobchuk said. “And make sure I’m doing the fundamentals right, because if your fundamentals are down, really there’s not much that’s going to get past you.”

Dobchuk stopped 25 Edina shots when all was said and done.

“Our team goal was to never stop believing that we could win,” said Edina defender Grace Bowlby. “I believe that we left it all out on the ice.”

Edina continued to battle throughout the game, coach Laura Slominski said. They were on the other end of a 1-0 game in the quarterfinals, beating Eastview. They also saw their shutout streak end. The last time the Hornet surrendered a goal was a 4-1 loss to Blake Jan. 29.

“It just didn’t drop for us tonight,” Slominski said.