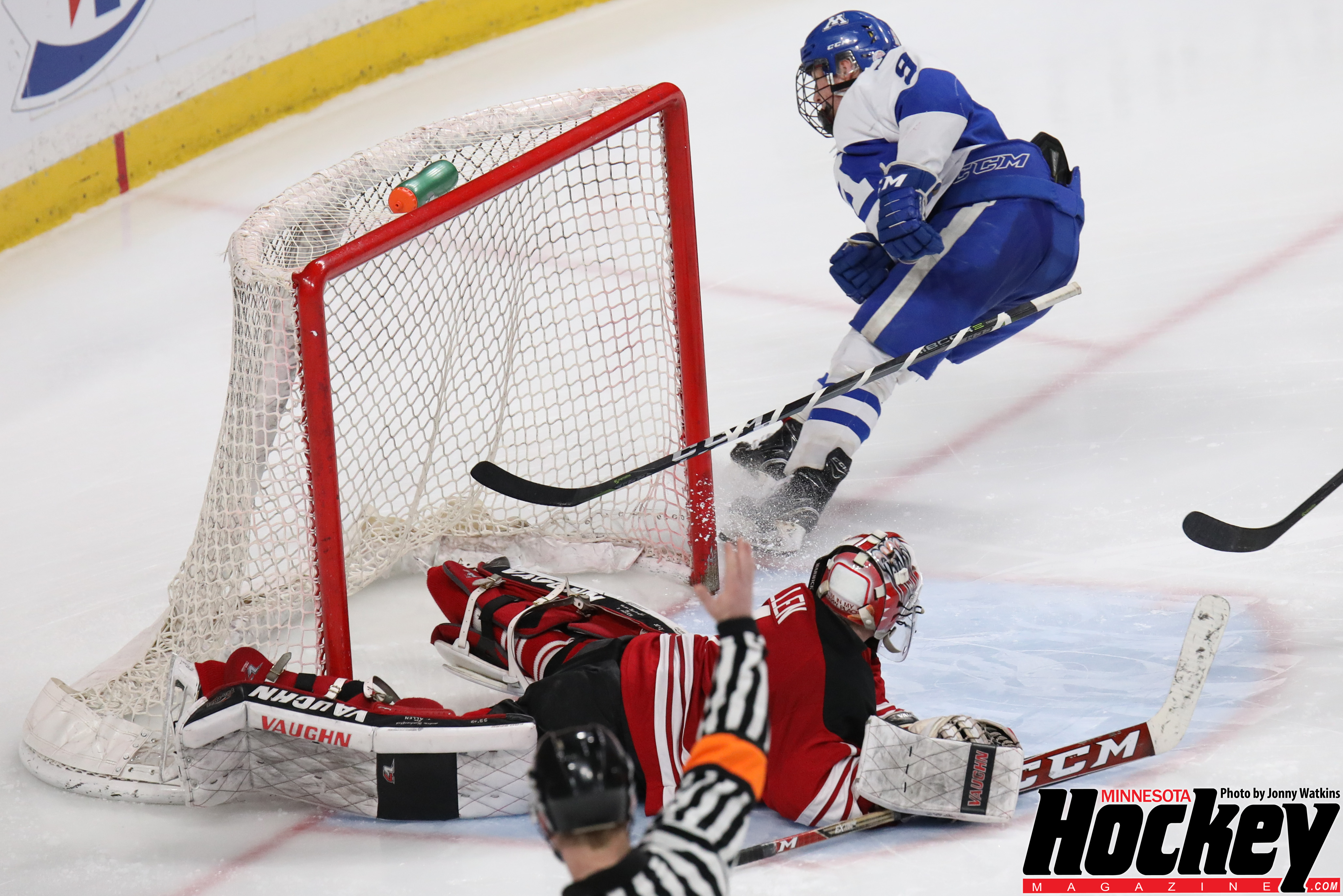 Minnetonka’s Bobby Brink loses his stick after scoring his second goal of the game, and fourth of the tournament, to put the Skippers ahead for good in their Class AA state semifinal win over Centennial. (MHM Photo / Jonny Watkins)

Fluke goal, stellar goaltending the difference as Greyhounds head back to title game

Luck of the Hounds

For a game that more than lived up to the hype, the game-winning goal did not quite measure up.

Duluth East junior defenseman Frederick Paine’s wrist shot from outside the blue line near the Edina bench deflected off Edina goaltender Garrett Mackay’s blocker and straight up in the air. Mackay lost track of the fluttering puck and it dropped harmfully behind him across the goal line for a 3-1 East lead 9:08 into the third.

“My coach (Dylan) Mills always tells me to put shots on net, so it’s like why not put a shot on net from the red line and it worked,” Paine said.

“That puck is round but it doesn’t always bounce round,” Edina coach Curt Giles said. “It was one of those flutter balls. You talk to any goaltender, they’d much rather have a direct shot shot at them than have a knuckleball come at them.” 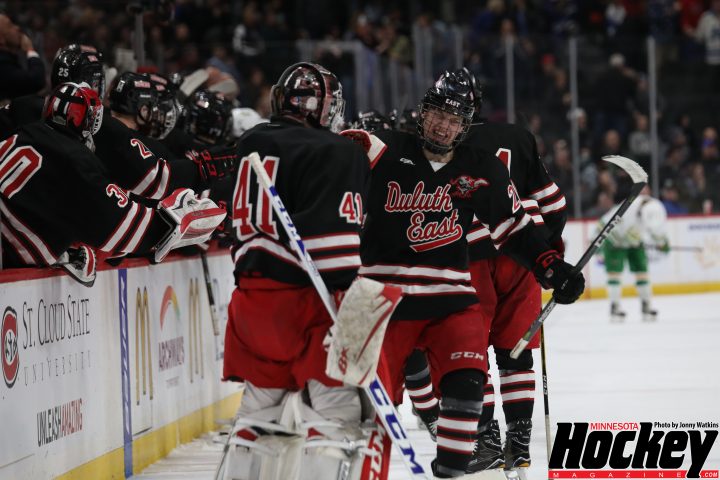 Duluth East goaltender Parker Kleive came up big early, late and everywhere in between, finishing with 24 saves. Edina’s Samie Walker, a Minnesota Mr. Hockey favorite and Gopher recruit, factored in several of them, but a few stand out.

The Hornets nearly got on the board just 2:36 into the game when Walker fed Jett Jungels for a breakaway opportunity, but Kleive was equal to the task and made a huge early save.

Kleive’s biggest save, however, came just over two minutes into the third period when Mason Nevers found Walker all alone just to Kleive’s right. Walker tried to wrap the puck around the sprawling goaltender but Kleive made a diving save to keep it a 2-1 game.

“He definitely played a good game,” Walker said of Kleive. “We had a ton of chances that we could have capitalized on that we missed and just a couple of bounces that didn’t go our way.”

With just over two minutes to go, after Nevers closed the gap to 3-2 for the Hornets, Kleive denied Walker once again from point-blank range and Nevers’ rebound attempt was shoved underneath the backside of defenseman Carson Cochran.

“It was just like a flash, like the time went by so fast. Just a bunch of people on top of me and I couldn’t even see the puck. I saw it hit my toe and it like bounced over a little bit … it’s always nice when the D try to help out and stop the pucks.”

The opening period was marked by a flurry of goals just past the midway point as the teams combined for three goals in a 2:08 span which ended with the Greyhounds holding a 2-1 lead.

Edina took the game’s first lead when Evan Shoemaker made a nifty move through the left circle and tucked the puck past Kleive just inside the far post at the 9:24 mark.

Nevers nearly made it 2-0 Edina when his shot from in close clanged off the left post. The missed opportunity hurt more when the Greyhounds tied it up 17 seconds later on Garrett Worth’s fourth of the tournament.

The Greyhounds weren’t done, taking their first lead just 55 seconds later on a goal by Ian Mageau. The senior forward carried the puck up the left wing boards and made a strong move cutting to the net around an Edina defenseman before shoveling the puck past Mackay.

More than Worth it

Worth added an empty-net goal, giving him five for the tournament and a Class AA leading 47 on the season. Remarkably, the senior has yet to receive a Division I college offer, much to the bewilderment of his coach Mike Randolph.

“I’m really frustrated because there’s not a lot of goal scorers around and I don’t get it,” Randolph said. “This guy knows where to go. Put him with the right people and he’s going to score goals. He’ll score at every level.”

Putting on the hits

Mike Randolph-coached teams are known for their physicality and this Greyhounds squad lived up to the reputation of their predecessors. Duluth East hit Edina early and often and did not allow the speedy Hornets to fly through the neutral zone as they are accustomed to doing.

The hit that drew the most fan reaction came less than four minutes into the second period when Duluth East’s Ricky Lyle read Walker’s drop pass to Jungels in the left offensive circle and the junior forward leveled Jungels with vicious open-ice check.

Friday’s meeting between the two storied programs was the first since March 6, 2015 when Nick and Ash, the Altmann brothers, banded together for a pair of goals to lead the unseeded Greyhounds to a 3-1 win over then No. 2 seed, and two-time defending champion Hornets.

The teams have met five times in the state tournament since 2011, with four of those coming in championship play. Edina’s lone win in that span was a 3-2 state semifinal win in 2013 en route to capturing the first of the Hornets’ two straight titles.

No. 1 Minnetonka vs. No. 5 Centennial

One night after battling back from a two-goal deficit to eliminate St. Thomas Academy in the quarterfinals, Centennial jumped out to a 2-0 lead on goals by Hayden Brickner and Jack Menne just 4:19 after the game’s opening faceoff. Like the Cadets, however, the Cougars watched the lead, and ultimately a Class AA title game berth, slip out of their grasp.

Bobby Brink and Josh Luedtke each scored twice for the Skippers in a 6-2 win, a hard-earned win considering the 54 shots Minnetonka fired on Centennial goaltender Travis Allen.

“We know it’s a 51-minute game,” Minnetonka coach Sean Goldsworthy said. “That’s kind of how we treated it. First four minutes didn’t go the way we wanted it but we had a lot of hockey left.” 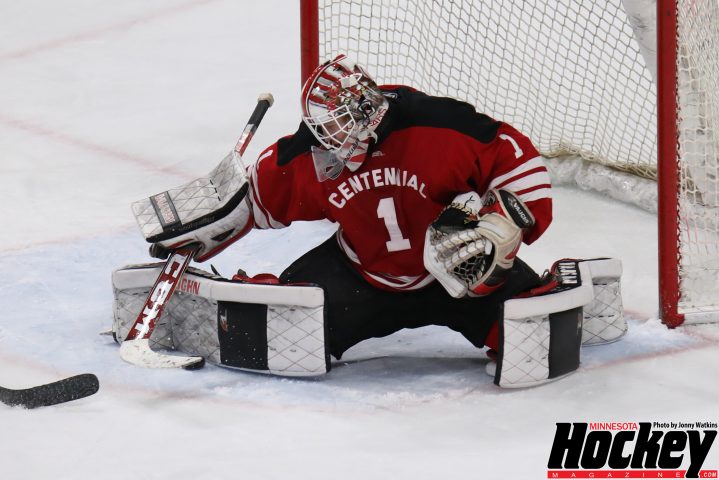 Centennial goaltender Travis Allen makes one of his 48 saves against Minnetonka in the Skippers 6-3 Class AA state semifinal win over the Cougars. (MHM Photo / Jonny Watlkins)

Like Philadelphia goaltender Ron Hextall winning the Conn Smythe Trophy in a losing cause against the Edmonton Oilers in the 1987 Stanley Cup final, Allen was the MVP of this game with his 48, often spectacular, saves. Allen even had the hat to show for it, donning winter headwear straight out of the movie Fargo, a donation from the Lino Lakes police department with the city’s crest affixed to it. The Cougars bestow it on the player deemed to be Player of the Game.

Allen, who as made 81 saves through two games of the tournament, said he thrives on all the action.

“I was having a blast out there, it’s not often you get shelled like that and can keep the game tied,” Allen said. “It’s my dream game, I just love getting shelled.”

Centennial star Lucas McGregor struggled to leave the ice under his own power late in the second period after a collision at center ice with a Minnetonka player. McGregor got back on his feet and hobbled to the bench, immediately taking a seat in the back where he was examined by a trainer.

McGregor returned to the ice following the second intermission and scored his first goal and second point of the tournament with 3:51 to play.

Tonka on the Brink

Minnetonka is in a position to win its first-ever boys’ Class AA hockey title thanks in no small part to star forward Bobby Brink. Only a sophomore, Brink led the Skippers in assists with 49 and, with four goals so far in the state tournament, has reached the 20-goal plateau.

Brink scored twice against Centennial, getting the Skippers on the board in the first period and notching the go-ahead shorthanded goal just 59 seconds into the third period. Brink’s follow through on his third-period shot hit the post, knocking his stick out of his hands. The lack of lumber had no effect on his goal celebration, though.

Despite a mounting shots advantage with little to show for it, Minnetonka simply kept coming with the knowledge it was just a matter of time. David Andes scored what turned out to be the game winner 5:48 into the third and Luedtke put the game away four minutes later with his second of the game and the fifth point of the tournament for the Skippers defenseman.

“I think what you’re seeing is that we don’t have any panic,” Goldsworthy said. “We believe we played the toughest schedule in the state this year and, when you do that, it galvanizes you and it prepares you to be in situations like that.”