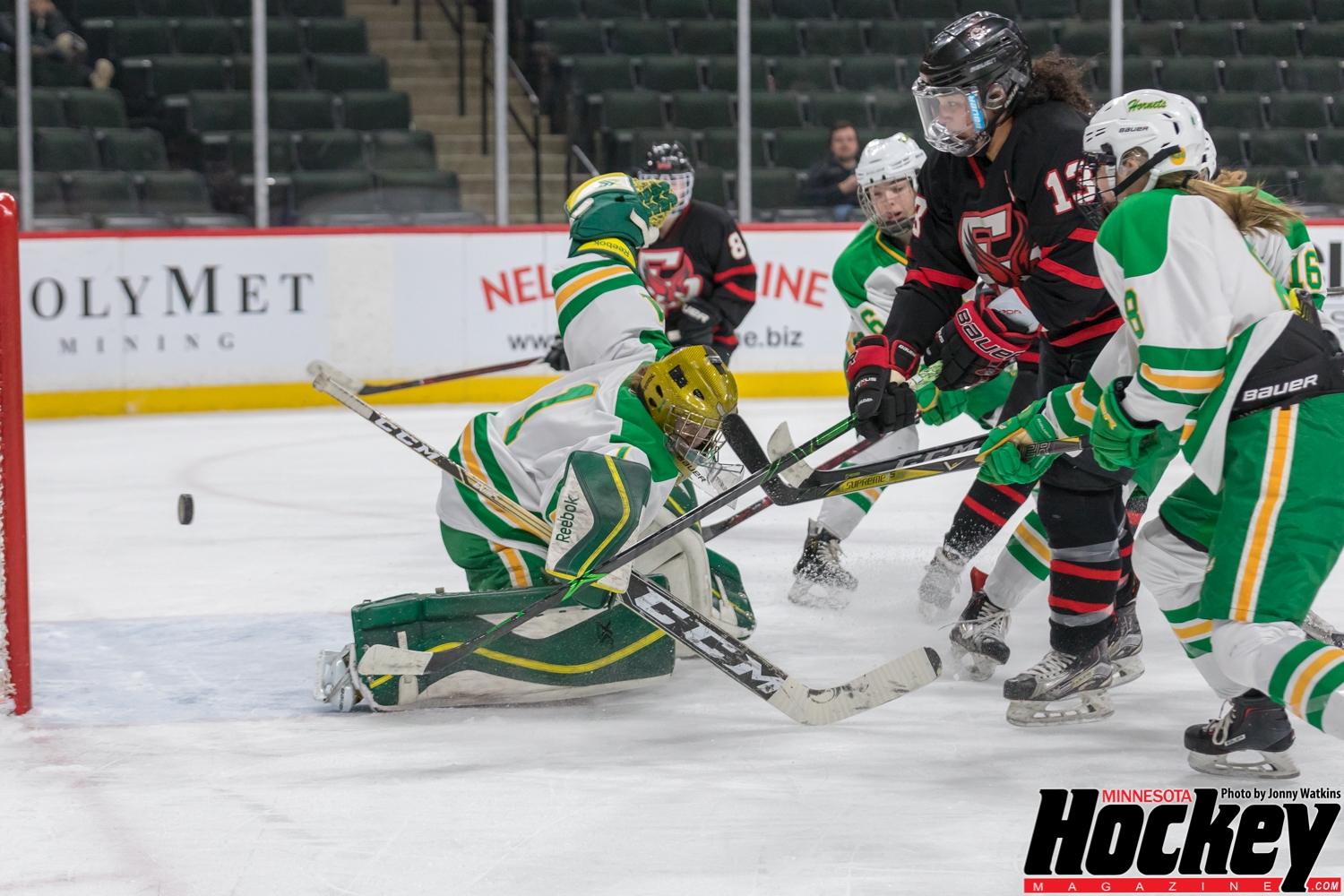 No. 2 Centennial vs. Eagan 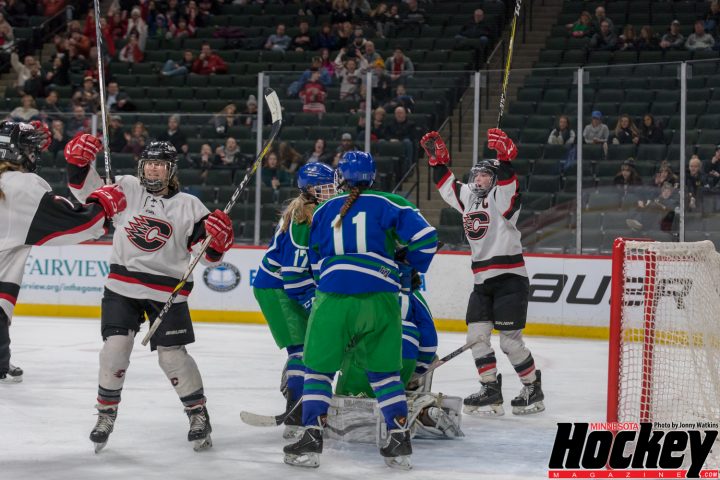 “They’ve been playing really good hockey all year long and stepping up in big games,” Centennial coach Kristina King said. “I didn’t doubt their abilities but I didn’t know they’d put so many goals up on the board tonight. It was fun to see.”

Hughes registered a natural hat trick by the 12:29 mark of the first period, with Linser assisting on all three goals, and added a fourth tally in the third. Hughes assisted on Allison Pitlick’s third-period goal to complete her 5-point night while Linser’s second period goal was her fourth point of the night.

Cougar goaltender MacKenna Stoterau saw her shoutout bid thwarted by Eagan’s Lauryn Roszak with 3:09 to play but finished with 22 saves. Maddie Nickell had 17 saves for the Wildcats.

“I think we were just in the right spots at the right times and we knew what to do,” Linser said. “We just kept doing it.”

What the Cougars  kept doing was coming through the slot with speed and open space, a recipe for disaster any time, but especially when facing Centennial’s lethal top line of Hughes, Linser and Emily Nadeau.

“We knew that that first line had a lot of scoring power so we ended up, obviously, behind and then trying to work our way back,” Eagan coach Dan Wilson said. “When you give players like that that space they and take advantage of that so, more often than not, you’re going to see them put the puck in the net when you give them that space and those shots in the slot area.”

Nadeau appeared to get the Cougars on the board first when Nickell batted Hughes’ backhand shot up in the air with her blocker and the puck dropped down in front of her at the left post. Nadeau whacked at it but, despite heavy scrutiny by the replay officials, it was ruled to be Hughes’ goal.

“I personally think she got the goal,” Hughes said. “It was sitting there on the goal line and she was the one that crashed the net and banged it home and I think she deserves the credit for that one.”

While Centennial (25-3-1) has been to the state tournament three times, the last appearance coming in 2008, the trip to the title game is a historic one for the program.

“It’s the first one in Centennial history for us,” Hughes said. “I think it’s a huge honor to do it for our community and to do it for all the little kids that we see up in the stands. It’s just an unbelievable feeling.”

The Cougars beat both of the remaining semifinal contenders back-to-back in December (3-1 over Eden Prairie and 3-2 over Edina) but King isn’t counting on getting an advantage from those wins. 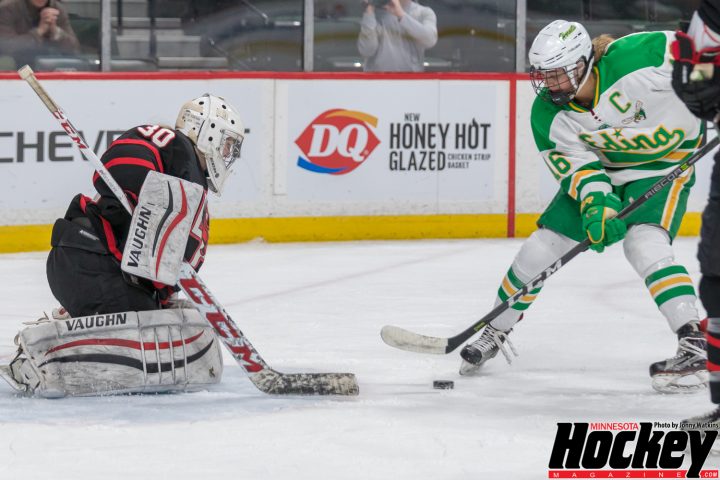 Top-seeded Edina earned a chance to repeat as Class AA state champions on Friday night with a hard-fought win over Eden Prairie. The Hornets outshot the Eagles 47-15 for the game but goaltender Alexa Dobchuck nearly stole the game for Eden Prairie (19-10-1) stopping 43 of those shots in Edina’s 4-2 win.

“I’d like to say it would be the first time I’ve seen it but I think I’ve seen it every day in practice and every game we’ve played for five years,” Eden Prairie coach Jaime Grossman said. “I’m definitely going to miss seeing that on a regular basis.”

Dobchuk’s remarkable performance included 22 second period saves, as state tournament record for saves in a single period. Edina needed a couple of deflections and balanced scoring to beat the Senior Goalie of the Year finalist as eight Hornets picked up points in the game.

“Edina’s a really good team and they always seem to play their best in the big spotlight,” Dobchuk said. “To be perfectly honest, those are the best games for me because I love taking shots and so I love playing Edina.”

“She always plays well against us, she always plays well in general,” Lance said of Dobchuck. “So to have 30 shots on her and not have one go in in a while, it’s definitely frustrating but it’s still motivating that we know we have to bear down and get one in there.”

Swaim opened the scoring with her 10th of the season on a deflection of a Evelyn Adams shot that eluded Dobchuk at 8:23 of the first period. The Hornets appeared to be heading to the dressing room for the first intermission clinging to that one-goal lead but Thursday night’s scoring hero for the Eagles, Crystalyn Hengler, would have none of that.

Smith was unable to control the rebound on a shot from Eden Prairie’s Sydney Langseth and Hengler pounced on it to score her 20th of the season with just 13.8 seconds remaining in the period.

That did not sit well with the top-seeded Hornets as the defending state champions exploded out of the gate in the second period, dominating the Eagles to the tune of a 22-2 shots advantage. But Edina had nothing to show for it as Dobchuk was there time and again to deny the Hornets and keep her team in the game.

All that peppering finally paid off for Edina just 2:20 into the third when Turner’s shot from the left point glanced off Eden Prairie defenseman Claire Kuipers and behind Dobchuk for a 2-1 Hornets lead. Six minutes later, Tucker set up Lance to give Edina some breathing room.

But just 10 seconds later, Smith struggled to control another Langseth shot and Wagner was there to pull the Eagles back within one. Eden Prairie made a push but came up short and Bowlby sealed it with an empty net goal in the final seconds.

Grossman said he expected a closer, more back-and-forth game and feels like the spotlight may have been a bit to big for some of Eden Prairie’s younger players.

“You’ve got to give credit to Edina too because they’re good at taking you off your game,” Grossman said. “I think they did a good job of taking us off our game tonight and making us earn every inch. I think they were really physical with us and I think that got some of our kids off their game.”

Waiting for the Hornets (27-2-1) in the championship game is second seeded Centennial (25-3-1), one of just two teams to have beaten Edina this season. That 3-2 December loss only serves to motivate a determined Edina team.

“I love it,” Reber said. They’re one of two teams that beat us this year so we’re ready for then and we’re excited . I think if we could have picked the opponent we wanted to play in the state championship game, it would be them.”