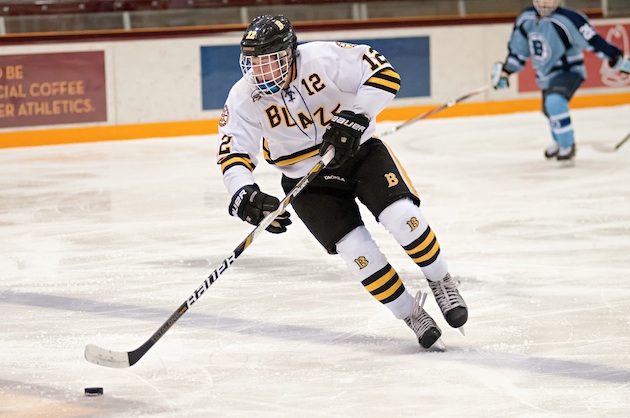 The top four of the MNHockeyMag.com rankings are unchanged this week as it appears teams are settling in the final two weeks of the season.  Enjoy this week’s Class AA MHM Top Ten.

This team is the real deal and they savaged a pair of South Suburban foes in scoring seven goals in both contests last week  One the wins was against the Lakeville South Cougars who will represent the toughest challenge for the Section 1AA title.  They have a tough road game this week against  #7 Duluth East and face an Eagan team that is always tough to play rounding out this week’s action.  A couple of wins this week and a win against Prior Lake in the final week would see them enter the post season as the top ranked team.  None of that matters as we all know it is one and done in the section and state tournaments. They remain the hottest team in AA high school hockey as they have stretched their unbeaten string to 17 games (16-0-1).  For the record, their last loss was December 7th to St. Thomas Academy by a score of 5-2.

Here they come, the Hornets are 4-0-1 in their last five and true to their script are getting better with each game in the closing weeks.  One has the feeing they have to be on the short list of State Title favorites.  Not only for talent but for execution.  No teams over the past seven years have won consistently in the clutch and right now is that time.  Our own Tim Kolehmainen equates the Hornets to the New York Yankees of High School Hockey for obvious reasons.  A tough with the Wayzata Trojans, as they have had wars this year.  They also have a sneaky tough game against Hopkins in the Pavilion which is always an interesting affair.

This is the time where the Pioneers kick back and work the cruise control and close out the Classic Suburban Conference for the last time as it will be history.  Lopsided wins last week make way for three games in four days this week.  An interesting tilt features Blaine and the Pioneers from Aldrich Arena on Wednesday.  The Pioneers are 8-1 in their last nine games and have earned three wins in a row after their 4-2 loss to St. Thomas Academy.

With a 6-0 section record and counting, the Trojans are locking in the number one seed for a tough section.  They continue their defensive brilliance this year in allowing just one goal against this past week.  They do enough offensively to be effective and win the games they are expected to.  A big game for the Lake Conference title is on the line this Thursday at Breamar Arena as they battle the Edina Hornets.  Another road game is on tap with the Minnetonka Skippers Saturday.

The Blaze have won a number of ways and like to live on the edge.  So far they have played in three overtime games and are 1-1-1 in those.  They have seven one goal games and are 4-3 in those contests.  They also have a pair of 1-0 wins over Wayata and Eagan this season.  Burnsville has been very good defensively this year and have picked up six shutouts in 21 games or just under a third.  Impressive indeed.  They have tough conference games remaining as they try to keep pace with Lakeville North for the conference crown.

Through some wins and attrition, the Bengals have risen to the top five again, a place where they really belong this season.  There is so much depth and scoring on this team with a very good blue line that they should have a say in the final outcome of the tournament run.  What is hurting them from being higher in this ranking service is their 3-3-1 record against teams that have been ranked in this particular top ten.  A win over Hill-Murray this week would certainly catapult them higher in the rankings.  Their losses this year have been to East Grand Forks, Wayzata, and Elk River Zimmerman.  This week it is three games in four days and two top teams are on the schedule as they lead off with Hill-Murray on Wednesday.  Elk River is on Thursday and the Elks have dropped two straight meaning the Bengals can seize that opportunity to all but lock up another Northwest Suburban Conference title.  They have won six straight contests since their 6-4 loss to Elk Rive on January 9th.

The Hounds have six games remaining with two weeks on the schedule.  They make up ground with three this week and it offers up a full variety on the menu.  First, it is the natural rivalry game with CEC on Monday.  Then they follow that with the #1 Lakeville North Panthers in Duluth on Thursday and they close out the week with a plucky STMA squad in a section 7AA game.  The Hounds continue to inch their way up and the feeling is that they, like Edina, get better as the season wears on.  We will learn more about that by the end of this week.

The White Bear Lake Bears are in the midst of a four game winning streak with quality wins over Hermantown and Grand Rapids.  They squeaked by Stillwater in overtime and handled Park of Cottage Grove to maintain the top spot in the Suburban East and are looking at a potential showdown with Cretin Derham-Hall for the top spot to close out the season.  They have three sticky games in the conference this week that they will need to get through.

After winning 8 straight games after the Edina Holiday Classic, they are now on a two game skid with losses to Maple Grove and Andover in Northwest Suburban Conference play.  Both games yielded just two goals in each game and they will need to re-distribute the goal scoring chores over the final weeks to make a push for the State Tournament.  Two difficult games are on deck for the Elks as they face Blaine and Centennial in key Northwest Suburban Conference games.  A loss or two will end up knocking the Elks from the top ten which was something that seemed impossible up until now.  The loss of Andrew Zerban will need to be overcome and this group has the ability to do that.

Right when one starts thinking, the top ten will have a team that is going to be a team that will stick in it for a few weeks, a loss or in the case of the Raiders, a tie occurs to a team they should have beaten such as the Mounds View Mustangs.  Still, the win over STA and the hammering over Woodbury coupled with 15 wins is enough to keep the Raiders in the top ten mix.  Knocked out this week were the Eden Prairie Eagles and the Raiders reclaim the 10th slot, one they had a few weeks ago.  They are still a force in the 3AA and will be a team that will need to be considered as State Tournament worthy.