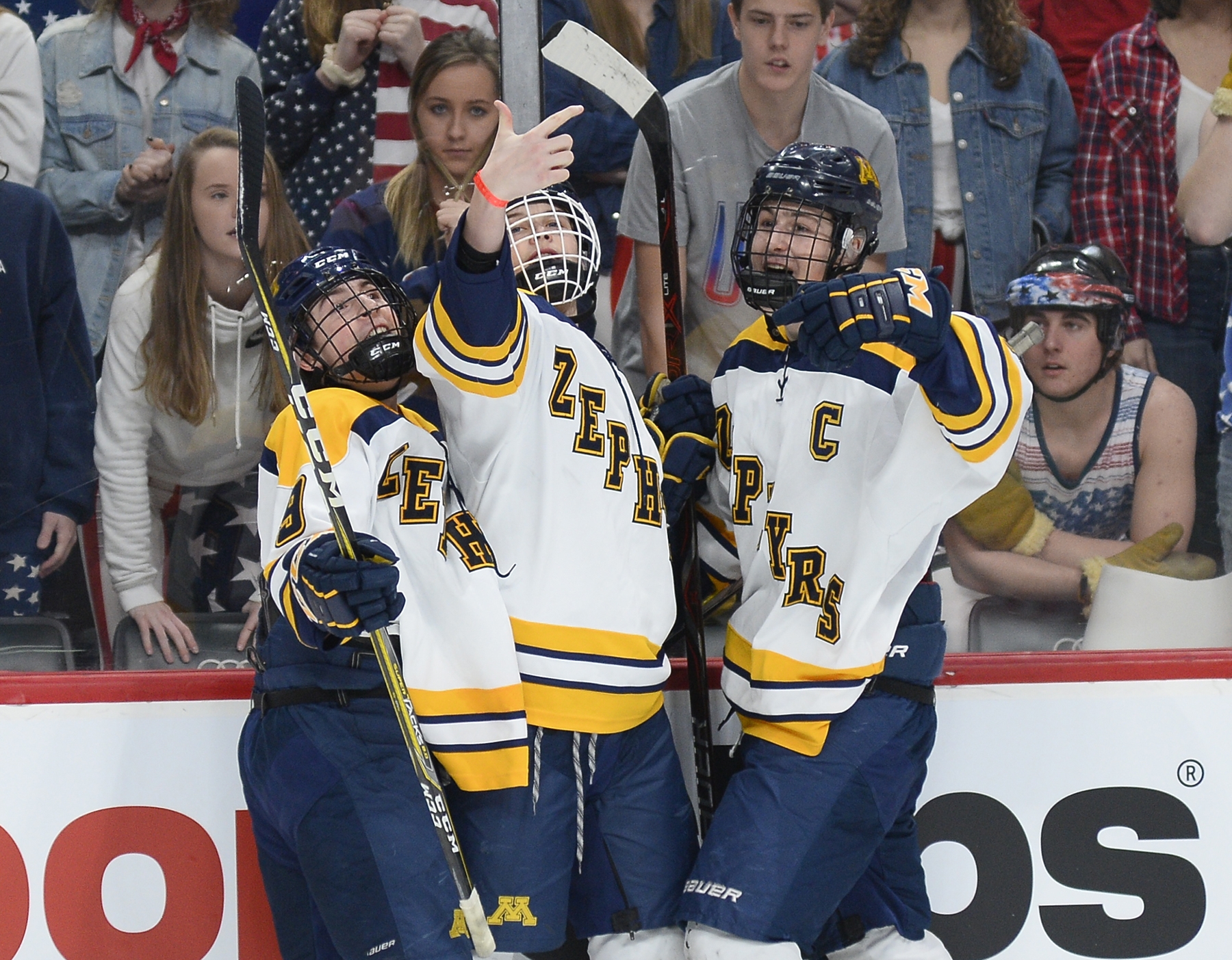 Mahtomedi’s Joe Paradise poses for a “selfie” with teammates after he scored the first goal of the Class A boys’ state tournament in the Zephyrs 4-2 win over Mankato East on Wednesday at Xcel Energy Center. (Photo by Tim Kolehmainen / Breakdown Sports USA)

No. 2 Mahtomedi vs. Mankato East

A descendant of Herb Brooks leaves his mark at The Tourney

His grandfather, Herb Brooks – you may have heard of him before – helped St. Paul Johnson to a state championship in 1955. And just like grandfather, he left a lasting impression in the Zephyrs’ 4-2 quarterfinal win over the Mankato East/Loyola Cougars.

Paradise knew from a young age that hockey was going to be the sport he excelled at.

“Since, he was like, a big part of my family, so [I] kind of just got right into it right away,” Paradise said.

Paradise scored two goals in the victory and drew attention with his first-period goal celebration in which he and his teammates posed for a mock selfie with Paradise holding the virtual cell phone.

When asked if it was planned, a big grin drew across the junior’s face and replied, “Yeah, we did.” Both he and teammate Charlie Bartholomew couldn’t help but laugh about the celebration. 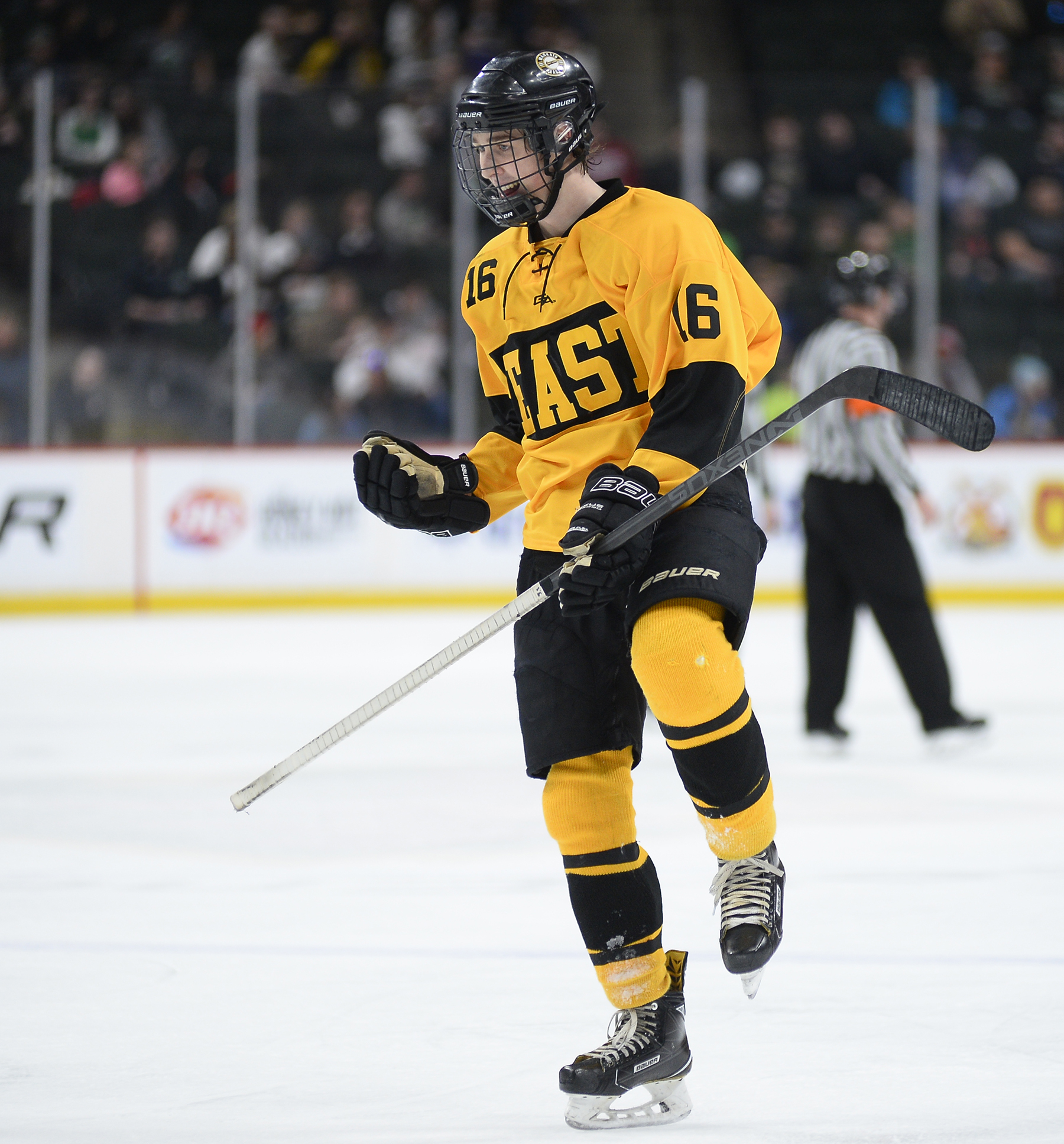 Paradise opened the game’s scoring with a slick wrist shot that beat Mankato East goaltender Jack Cusey and he later tied the game for Mahtomedi just 31 seconds into the third period after the Cougars had taken a 2-1 lead into the second intermission on goals by Adam Megard and Sam Schulz.

The final 10 minutes of play in regulation was quite chaotic, the referees handed out a barrage of penalties, with the highlight being a five-minute major on Layten Liffrig, giving Mahtomedi a five-minute power play. Eventually, Charlie Bartholomew netted the game-winning power-play goal to give Mahtomedi a 3-2 lead. Fifty-eight second later, Kory Pilarski scored another goal, securing the win for the Zephyrs.

Mahtomedi had had only come back once in the regular season when trailing after two.

“This team has shown grit all season, from day one,” Zephyrs coach Jeff Poeschl said. “And as a coach, it’s just a pleasure to be part of. Because on the bench, there’s no quit, there’s no panic. It’s, ok let’s get to work and let’s get this taken care of.”

Orono continues to have Litchfield/Dassel-Cokato’s number

Both teams are very familiar with one another but it’s been a one-sided rivalry as Orono has not lost to Litchfield since 2001 and that streak continued in the Spartans 6-1 win over the Dragons.

“It came out that we’d beaten them 30-some times in a row and 2001 (I think) it was the last time they beat us,” Orono coach Will Scholz said. “So it’s always going to be in their heads but we just to try preach it’s not who we play it’s how play.” 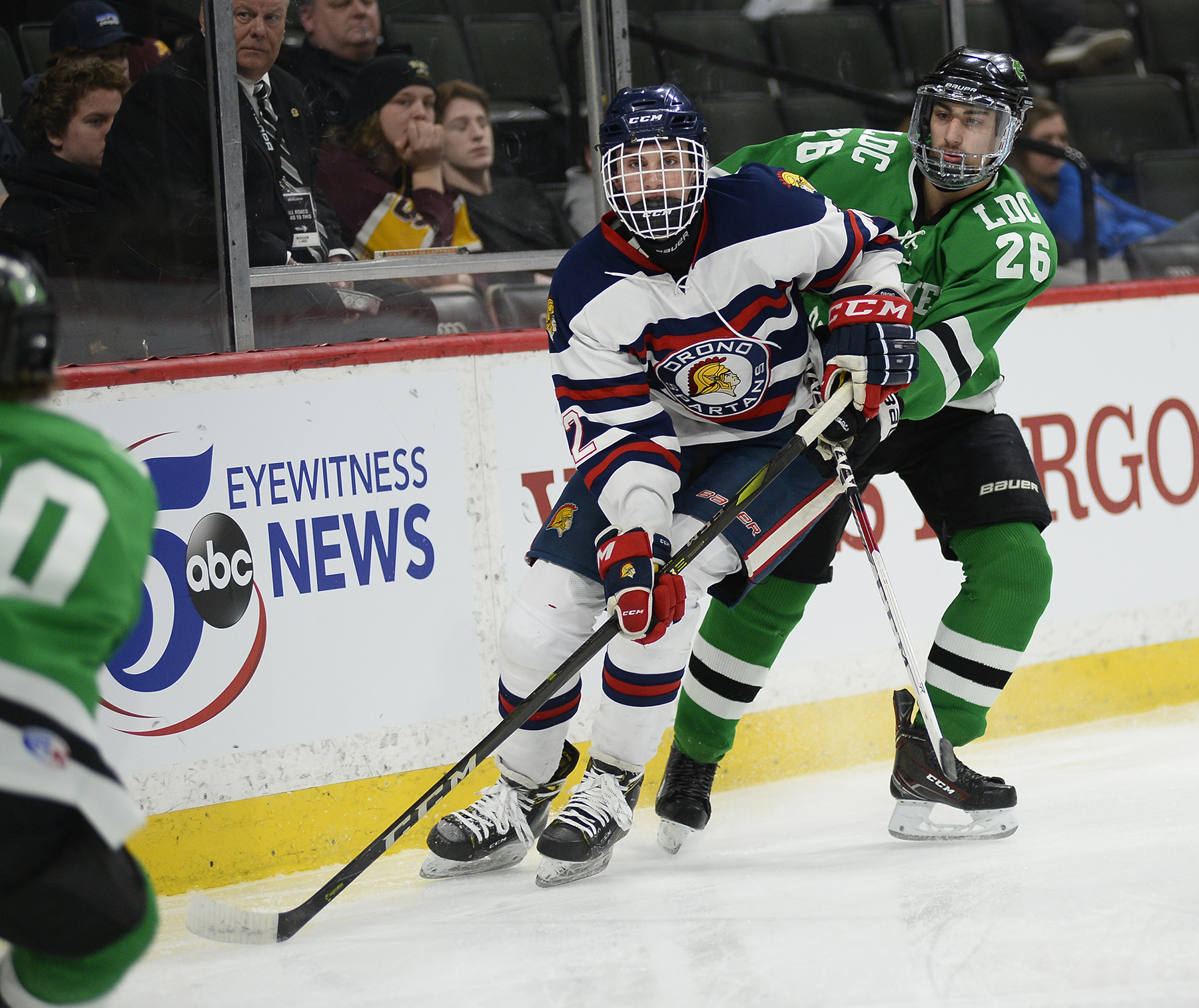 Orono defenseman Zach Adams fights off a check from LDC’s Blake Johnson in the Spartans 6-1 Class A state quarterfinal win over the Dragons. (Photo by Tim Kolehmainen Breakdown Sports USA)

After a scoreless first, the Spartans caught fire in the second netting two goals that were 27-second apart. First, it was sophomore Lucas Jorgenson scoring, with senior Davey Burns making it a two-goal lead shortly after. Then the Spartans really poured it on, receiving goals from Daniel Eckerline and Jack Kubitz and just like that it was 4-0 after two.

“It was a fun a game,” Kubitz said. “It was definitely nerve racking in the first period but after we put one in, I think we knew we could beat them. Because the past games, we just had to get past the first one and then the floodgates would open.”

As regulation winded down, the Dragons would finally get on the board via the power play when senior Orrin Grangroth scored his team’s only goal deficit to 5-1.

Grangroth, a senior who played in his last high school game took pride in making sure his team wouldn’t get blanked at the State Tournament.

“To have our team get on the board was big and not get shutout and it feels good to score on the big stage,” said Grangroth.

No. 1 Hermantown vs. Monticello

Moose give Hawks all they can handle

In a rematch from last year’s Class A championship game, the Monticello Moose faced the defending champions, the No. 1 Hermantown Hawks.

Hermantown jumped out to an early lead but Monticello would not go quietly and thanks to the heroic play of an underclassman, Hermantown will be moving on to the semi-finals. 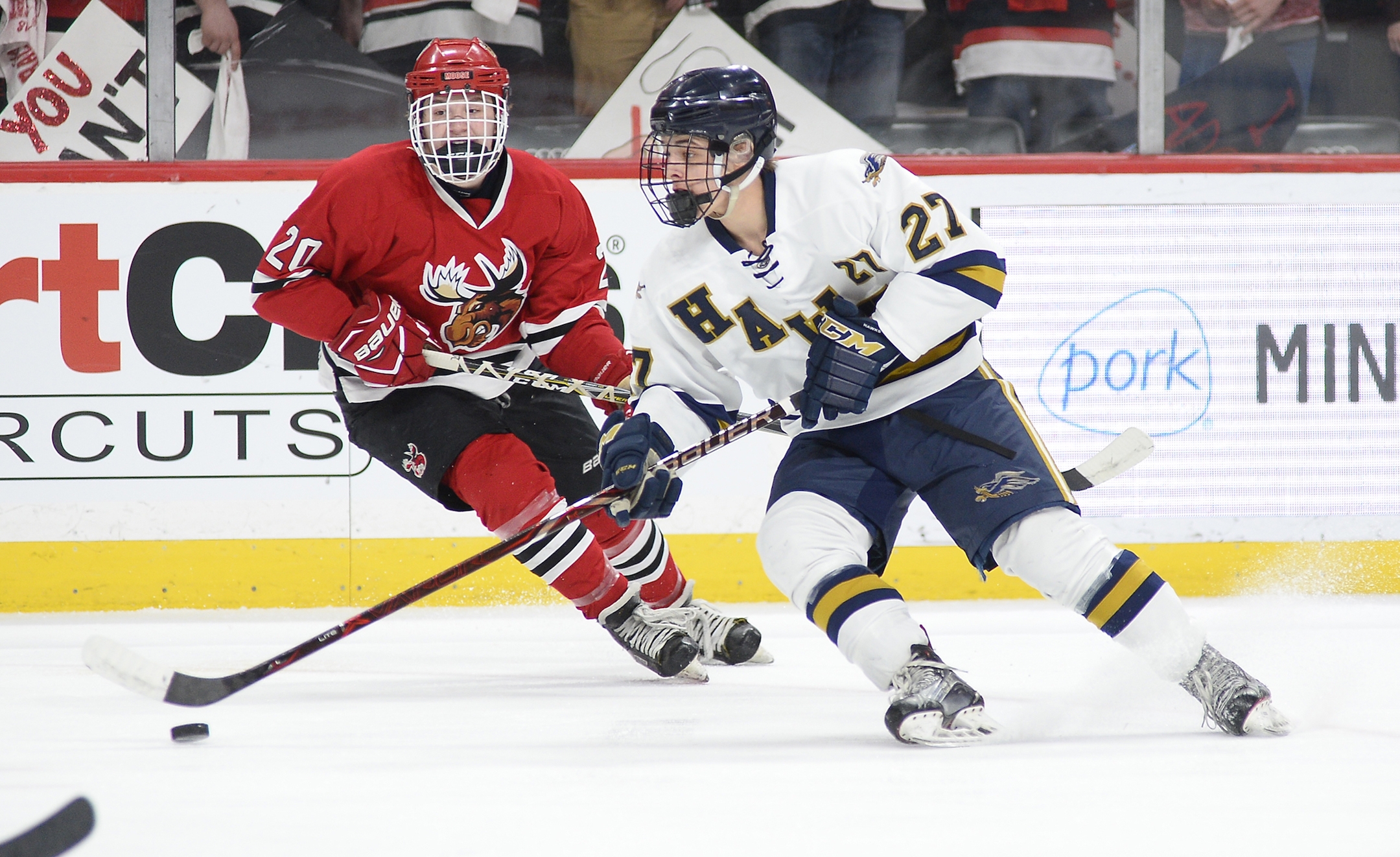 A Sophomore as the MVP?

Hermantown is no stranger to the state tournament but for a sophomore to register a hat-trick and earn game MVP honors? Now that’s something incredibly. His impressive play this season – and in the quarterfinal win – was something a powerhouse like Hermantown was surprised by.

“The other day, we were looking at old stats and we don’t remember a sophomore with the impact in points that Blake’s had,” Hawks’ first-year coach Blake Andrews said of Biondi. “I don’t know if we’ve ever had a sophomore with the hockey IQ in a total package of a game. So Blake has a lot of attributes to his game that most seniors would love to have.”

A humbled underclassman replied, “Thank you, coach.” after receiving such high praise from his coach.

The Hawks are anchored by their top line of Tyler Watkins, Jacob Herter and Biondi as the trio has combined for 163 points this season. So it’s only natural, that they scored the first three goals. First Biondi snuck a past right under the glove of goaltender Tyler Klatt, with assists going to Watkins and Herter. After Hermantown drew a power play, Herter made it 2-0 with assists going to (guess who?) Biondi and Watkins.

Even when Monticello draped all over Biondi, he somehow outmuscles the opposition and pushed another puck to the back of the net, which gave the Hawks a 3-0 lead. 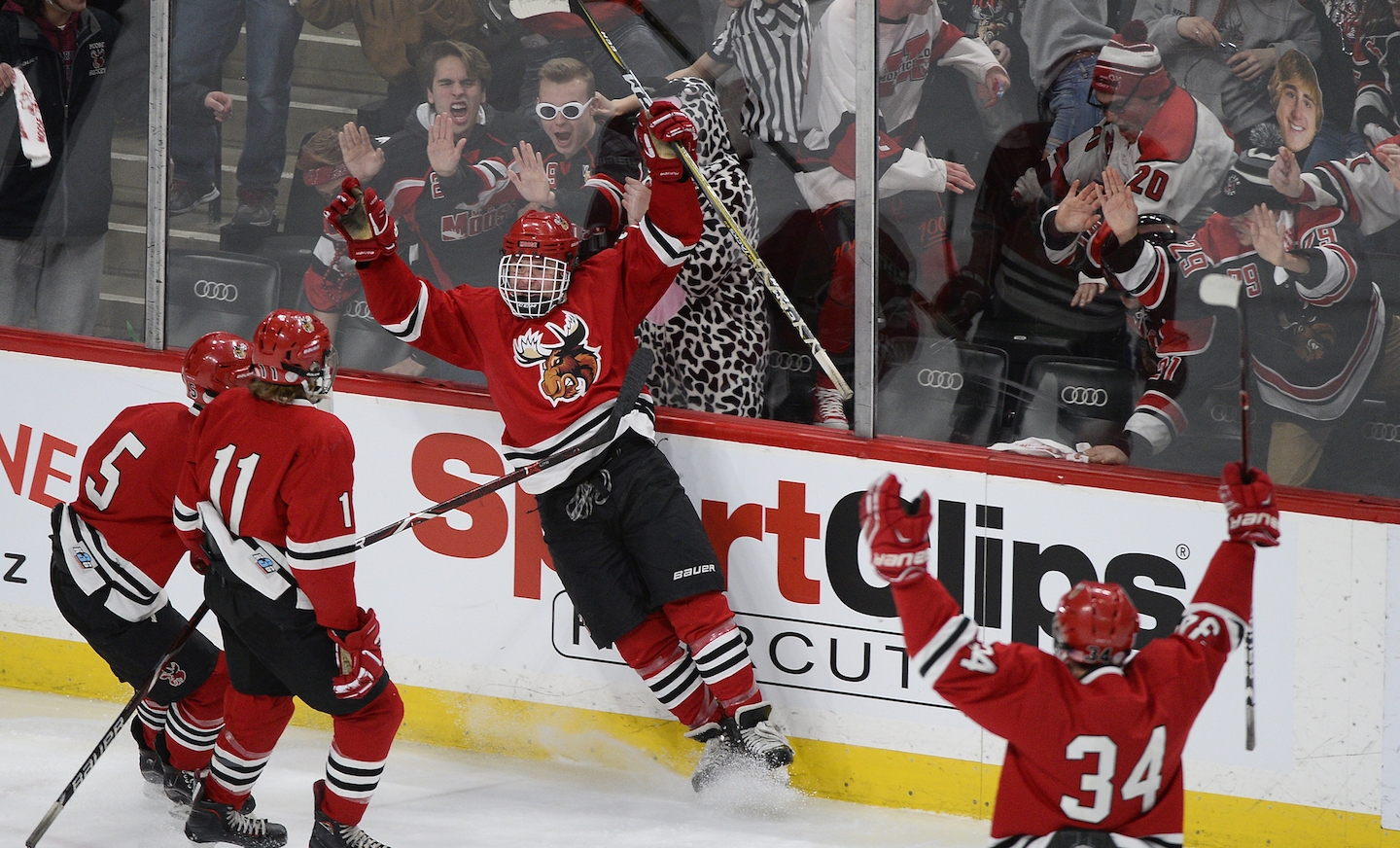 Monticello’s Matt Miller celebrates one of his two goals against Hermantown in the Moose’s 4-2 Class A state quarterfinal loss to the Hawks. (Photo by Tim Kolehmainen / Breakdown Sports USA)

It looked grim for Monticello after Hermantown took a 3-0 lead. Yet 28 seconds later, sophomore forward Matt Miller put on his Superman cape, skated into the offensive zone and blasted a puck from the point and Monticello was on the board. Miller continued to play hero just 2:17 later when the forward streaked in on a breakaway, beating goaltender Cole Manahan for a second time and all of the sudden it was a one-goal game.

“They never said quit,” Monticello coach Eric Nelson said. “They kept going, they kept battling and you know testament to Matt and his shot. He’s got a great shot and a great heart. Just kept getting pucks on net and he was fortunate to get a couple in.”

No. 4 Alexandria vs. No. 5 Thief River Falls

The Cardinals achieved a program first with their victory.

In a low scoring affair, the Cardinals pulled through for a 1-0 win; giving the program its first ever state tournament victory. 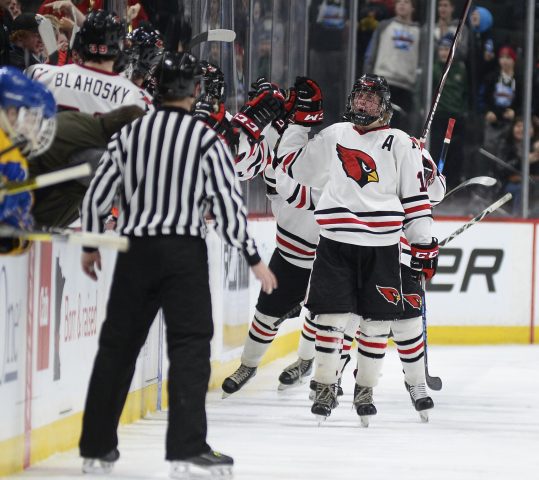 Alexandria’s top line of Ben Dohert, Caleb Strong and Jack Westlund we’re creating plenty of chances early on. After nearly lighting the lamp on multiple opportunities, Westlund received a beauty of a pass from defenseman Andrew Revering and Westlund buried the puck in the back of net.

“I got to give some credit to where credit is due to the people who assists me,” Westlune said. “Because without them I never score but it just feels great to be the one who scores, but I mean obviously it’s not just me it’s everyone.”

Westlund came into the tournament with 14 goals, which was tied for second on the team.

“The second period is the period I thought we just didn’t show up,” Thief River Falls coach Tim Bergland said. “Credit them for executing and we didn’t.”