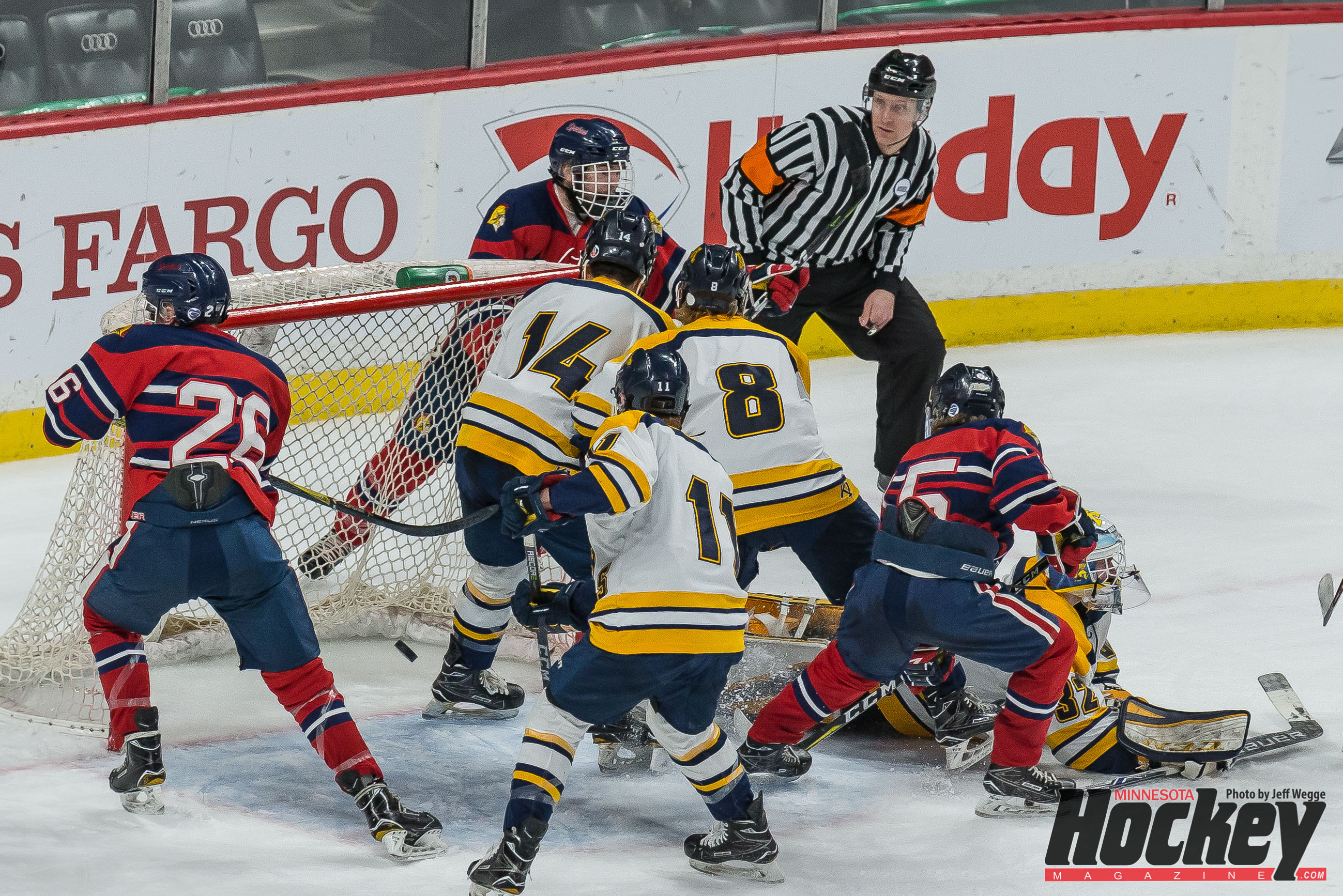 Orono’s Dane Korsi (#26) begins to celebrate after netting the game-winning goal in overtime to lift the Spartans over Mahtomedi 5-4 and into the Saturday’s Class A state championship game. (MHM Photo / Jeff Wegge)

Orono advances to the Class A Championship Game in a thrilling 5-4 overtime win over Mahtomedi.

The Orono Spartans looked as if they had this game wrapped up. After senior Thomas Walker secured a hat trick with four minutes to play in the second period, the Spartans seemed to set their speedometer to cruise control.

Yet the Mahtomedi Zephyrs did not quit and made one of the most memorable comebacks in tourney history, before coming up just short on Dane Korsi’s game winner for Orono just 2:26 into overtime. 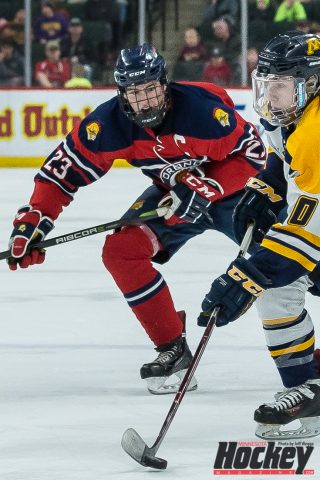 Trailing by four goals, the hope of playing in a championship game appeared slim-to-none for Mahtomedi. After failing to score on their first two power plays, the Zephyrs finally capitalized. Five-seconds into the man advantage, senior Sam Ayd rifled a shot from the point to finally get Mahtomedi on the board. Then in the final minute of play in the second period, Kory Pilarksi made it a two-goal game heading into the second intermission. You could feel the tide start to turn Mahtomedi’s way.

“The coaches were great about keeping our spirits up,” Ayd said. “We knew we were going to pop one and we eventually did and it felt great. We all know what we got to do if we wanted to stay in the game, and we showed that we all came together.”

Despite a layover between periods, the Zephyrs came out with the same fire and seniors Aidan Pearson and Jeff Kneale scored two goals over a 2:05 span and, just like that, a four-goal Orono lead had evaporated.

After neither team could capture the go-ahead goal in regulation, things had to be settled in overtime. Despite skating on their heels for the majority of the third period, Orono woke up and possessed the puck for the majority of overtime. Two minutes into the overtime, there was a scramble behind the net and defenseman Davey Burns threw a puck towards the crease where Korsi, channeled his inner baseball ability, and knocked the puck out of the air and into the back of the net for the winner.

“I played baseball with Dane,” Walker said of Korsi. “I’ll tell you, he’s a natural athlete; he’s got hand-eye. I mean puck in the air? I’d say he knocks it 10 out of 10 times. I’ve watched him crush baseballs. There’s no reason that he can’t crush a puck into the net.”

Nothing to be Ashamed Of

Although it wasn’t the result they were looking for, Zephrys coach Jeff Poeschel had nothing but positives to say about how his team played.

“Don’t know if there’s many other teams in the state and would’ve been down by four and [not] folded up their tents and packed it in,” Poeschl said. “There’s no way to describe how proud I am.”

No. 1 Hermantown vs. No. 4 Alexandria

Alexandria upsets No. 1 Hermantown to advance to the Class A championship game

For the first time since 2009, the Hermantown Hawks will not be playing in a state championship game, as the Alexandria Cardinals spoiled the improbable streak with a 6-1 victory in the semifinal round.

The Cardinals’ timely goals, including a hat trick by Jack Powell, and goaltender Jackson Boline’s 33 save effort have Alexandria in the state championship game for the first time in school history. 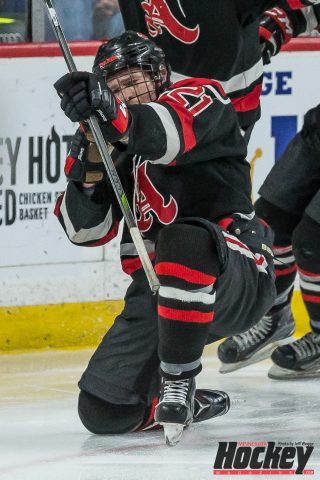 Quieting a team like Hermantown is not an easy task but Alexandria made it look easy. Both teams lit the lamp in the first period but the Hawks had just five shots on goal heading into the first intermission. Considering Hermantown averages nearly five goals per game, that’s very impressive.

“We knew we couldn’t turn pucks over in neutral (zone),” Alexandria coach Ian Resch said of trying to slow down Hermantown’s offense. “They’re a quick transition team so we thought if we could get pucks deep, get our forecheck going, stress their D, make their D play in their own zone. They’re a high offensive team, so teams like that typically don’t like to play a lot in their own zone.”

Meanwhile, on the other side of the ice, Hawks coach Patrick Edwards was a bit dumbfounded on why his team couldn’t find the offense that they’re so accustomed to seeing.

With under three minutes to play in the second period, the Cardinals took a 2-1 lead when sophomore forward Caleb Strong took a pass in the slot and fired a puck just about the glove hand of opposing  goaltender Cole Manahan.

“I just heard Caleb yelling,”Powell said who assisted on the goal. “Threw it to an area and Caleb’s so good he could stick handle in a phone booth. He’s got the best hands and he’s so accurate. I knew he’d find the back of the net.”

Strong’s game-winning goal set the table for a third period where Alexandria would net four goals – two of them empty netters – to secure their win.

The community deserves it

When you have players who are about to play in their first state championship game, it’s not just a joy for them, but for the community as a whole. Which is why win or lose the fact of just being in such a big game means so much for the city of Alexandria.

“I love Alexandria,“ Powell added. “born there, raised there. My parents taught me how to play hockey and they’ve been through so much and I really appreciate them. Without them we wouldn’t be here right now and it’s just good for the community. They’ve been behind us, supporting us, the school, the red line club, parents, friends, family. To give this to them, to the community, is awesome.