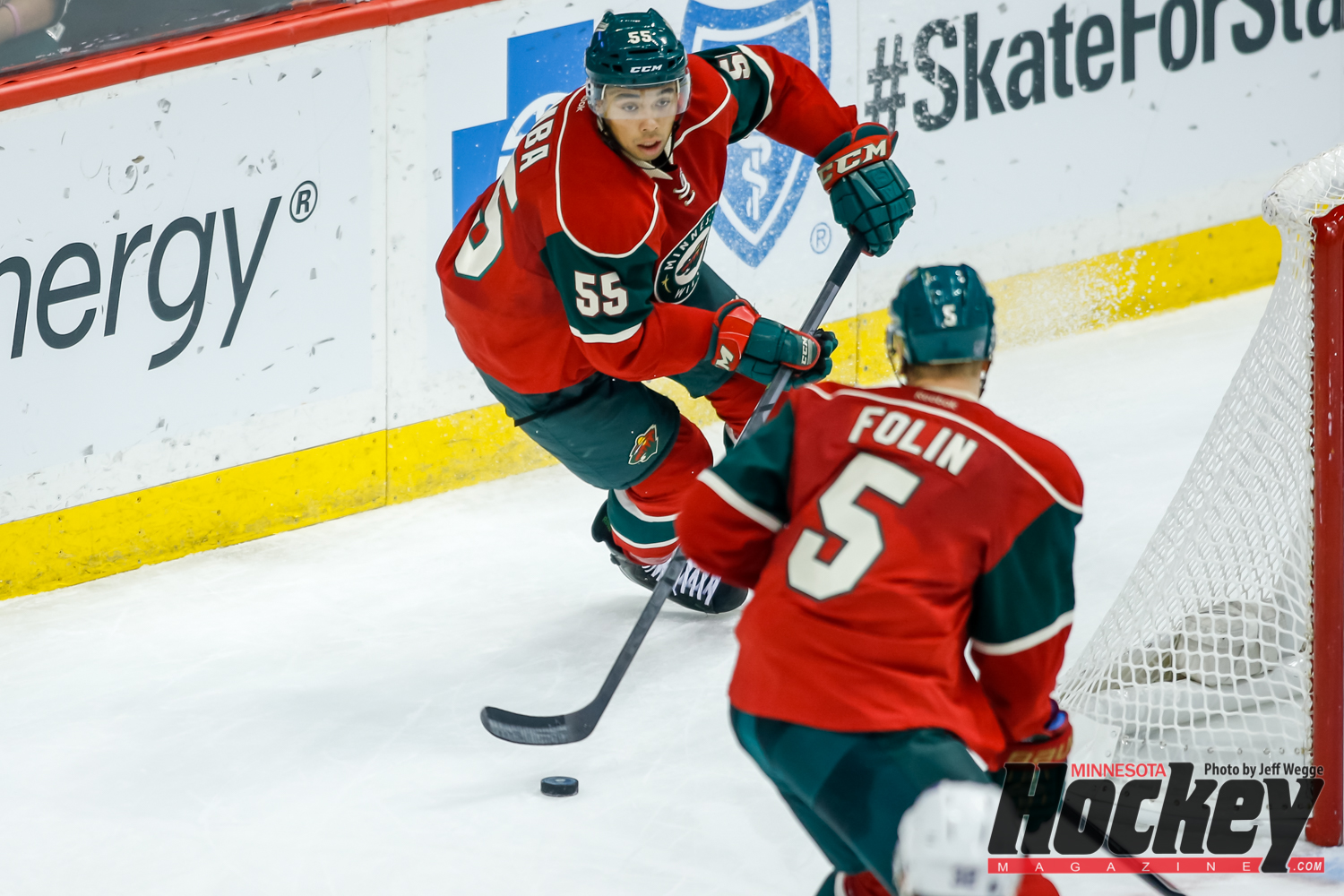 SAINT PAUL — After Saturday’s morning skate, it appeared Matt Dumba would be a healthy scratch for the Wild’s final preseason game as it hosted the St. Louis Blues. He was told to come to the rink and prepare as normal, just in case.

At 5:20, he got word; He was in the lineup. It was his final chance to try and earn a spot on the opening night roster, and he made the most of it.

Dumba put up a two-point night, which included a goal on an absolute rocket of a shot in the third — accounting for one of the Wild’s goals in the 5-4 overtime win — and 23:28 TOI. He was also effective on the power play, moving the puck and jumping in on offense.

“I knew this was kind of the last hurrah before everything got said and done,” Dumba said. “I wanted to go out with a bang I guess and I thought I played a pretty good game; I was pretty happy with it.” 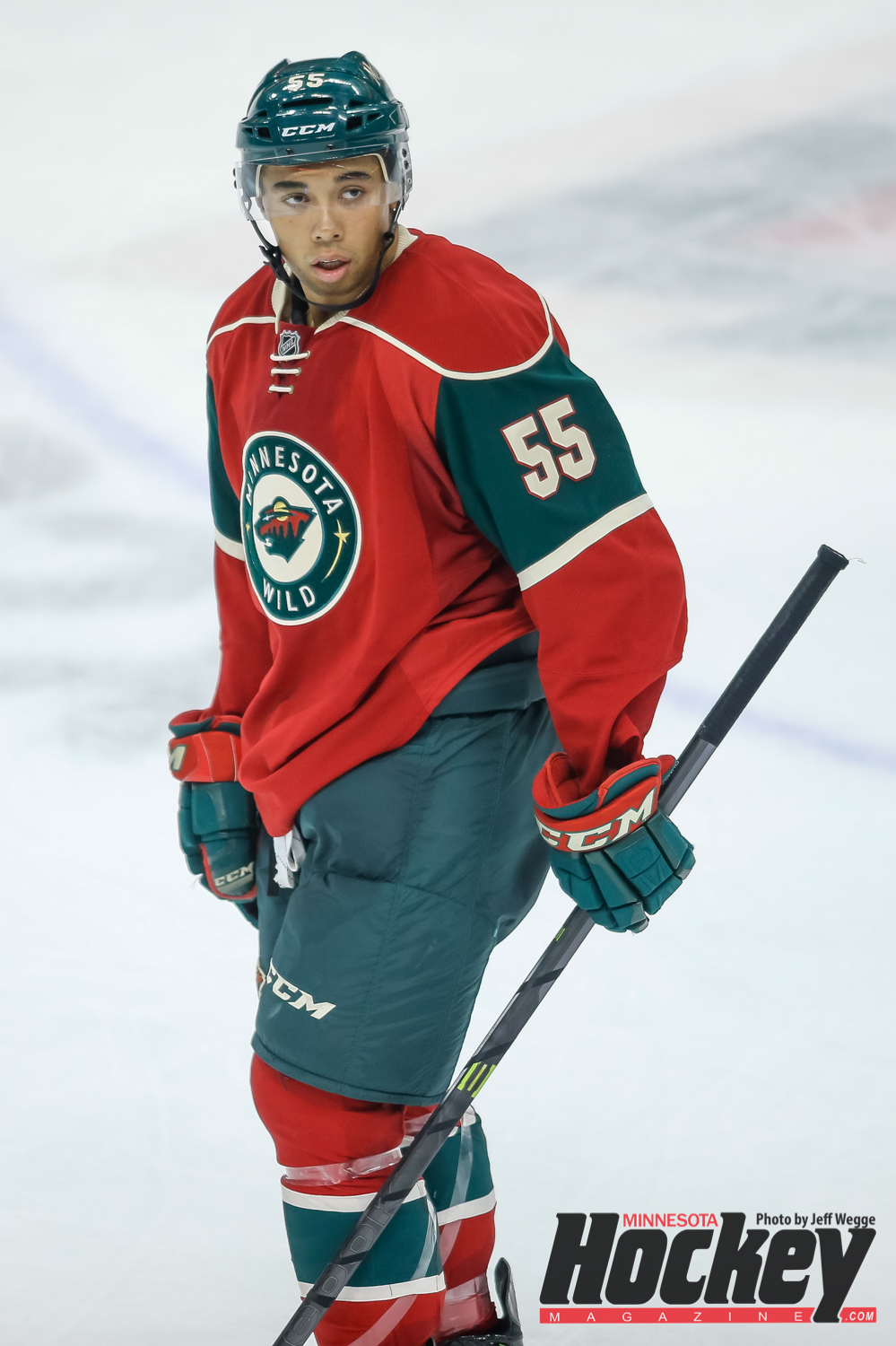 If Matt Dumba is destined for Iowa, he did not go down without a fight in the Wild’s 5-4 win over the Blues on Saturday night. (MHM Photo / Jeff Wegge)

Wild coach Mike Yeo noted that come Opening Night, Minnesota will have to come up with some pretty creative reasons to keep the young defenseman out of the lineup.

With final roster cuts looming in the next few days, Dumba felt he had a strong camp overall — a notion with which Yeo agrees. The 20-year-old defenseman also echoed Yeo, noting there are still parts of his game he needs to improve, but he feels a lot better coming out of camp this season as compared to last season.

But Dumba is one of a few young defensemen catching the coaches’ attention. Christian Folin, who was signed as a free agent out of the University of Massachusetts-Lowell last season, has also put together a solid showing in camp.

“Both those guys have had very strong camps,” Yeo said. “It’s hard for me to sit there and say that they’ve had a bad game, let alone a bad period. We’re already discussing some things right now and that’s what you want; Those guys have made things difficult on us.”

While they’ve each made their case to the coaches, Dumba noted that it’s been a stressful time waiting to find out if he made the cut for Opening Night. In the meantime he’s tried to focus on his game, getting better each day, doing the little things, and keep his head out of the media.

When the Wild and Blues met Thursday night in St. Louis, the two racked up a combined 92 penalty minutes. Things didn’t get as out of hand Saturday night as the Wild was pegged for 23 PIM to the Blues’ 31. But, where Minnesota failed to convert on the power play Thursday night with a young roster on the ice, Saturday night it netted a pair of goals from Mikael Granlund and Thomas Vanek on the man advantage.

The power play, which operated at an NHL mid-range 17.9 percent last season, has seen a boost so far this preseason as it’s accounted for seven goals on 26 opportunities. While it’s only the preseason, that’s a 26.9 percent clip. Though, Yeo is quick to note that those power play units have looked different night in and out.

“Seven preseason goals with seven different units I think,” Yeo said. “We were mixing it up a lot today. It’s not one group getting it … we’ve got two very dangerous units right now and we need that; we’ve got to stay on top of it.”

“That’s why we play these games, to prepare for the regular season,” Koivu said. “There’s still a lot of things to work on, but I’m sure every team has the same thing going into the season. But we’ve got a couple more practices and make sure we’re ready to go for the opener.”