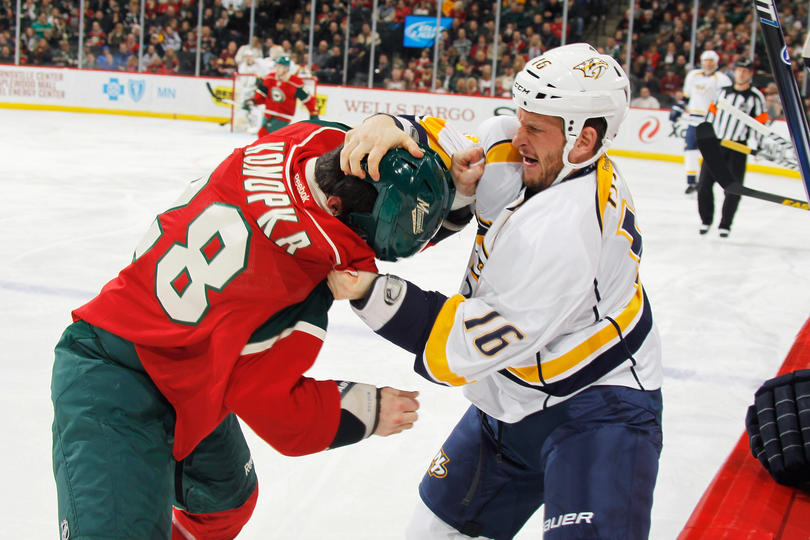 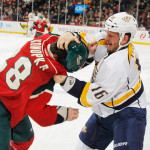 Featured Image:
The Wild’s Zenon Konopka and Nashville’s Rich Clune engage in a scrap in the Wild’s 2-0 win over the Predators on Tuesday, Oct. 22, 2013, in St. Paul, Minn. (Photo: Getty Images/Bruce Kluckhohn)

With two of the five scheduled contests between the Nashville Predators and the Minnesota Wild in the books, one thing is certain, there will be no love lost this season between Smashville’s hard-nosed Rich Clune and Minnesota’s own penalty box bench warmer Zenon Konopka.Need a reminder of what went down the first time the two men met this season? Here’s a clip to jog your memory:

Missed Tuesday night’s rematch? There’s a video for that too:

There is no question that both of these men are well seasoned fighters with an underlying grudge, but what do Minnesota fans really know about Konopka’s new nemesis? Let’s take a moment and get to know the enemy, Rich Clune.

Following Tuesday night’s contest we took a swing through the Predator’s dressing room to find the oldest of three Clune brothers from Toronto, Ontario, a man Predators staff describe as “The funniest guy you’ll ever meet.” Twitter fans would probably echo that sentiment as Clune made national headlines over the summer with his witty tweets and hand-written contract demands. Not only did he want a statue erected in his honor he also tossed in a demand for the reporters out there which read, “If any media interviews me about my substance abuse history, they must tell me a dark secret first.”

We didn’t ask Clune about his substance abuse issues which were brought to light late last season in an ESPN article on his rehabilitation, but we did ask “Dicky” when he would be making his triumphant return to the twitterverse since he mysteriously deleted his account almost as quickly as it showed up. His response was nothing short of what you would expect, given his reputation, a response he laughed all the way through.

“I was kind of the Miley Cyrus this summer of twitter,” Clune said. “I don’t know, we shall wait and see…[looks up and smiles].”

What we really wanted to know about was this newly formed rivalry between Clune and Konopka, starting with what happened in their most recent foray into shaking the mitts.

“I think I kind of got the jump on him last game and he returned the favor,” remarked Clune. “Kind of came out from behind me so it is what it is.”

Clune continued to chirp back and forth with Konopka while they served matching five minute majors before having what looked like a very friendly chat with some Wild fans to his left. 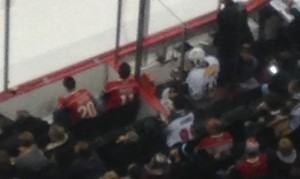 The reason we believe this new rivalry is far from over? Clune opened the door wide on that assumption saying, “We (he and Konopka) kind of play similar styles and we both like to fight so I’m sure it’s not the last time we’ll fight.”

Tuesday night’s game was Clune’s return to the ice after being a healthy scratch for the past five, yes five, games. Clune commented on his first night back as well with a pretty standard response, “Obviously having a fight on your first shift it takes you a little bit to get your second shift. I just tried to keep it simple and get in on the forecheck when I could. Our line had a few scrambles in front of the net which I would’ve liked to go in but what are you gonna do?”

In the grand scheme of things, Clune’s on-ice performance was notable given the five game benching and it comes as no surprise that he dropped the mitts, a fighter’s way of letting the team know he’s there and he’s going to go to work for them.

In case you missed the gems that were Rich Clune’s tweets this summer, we’ve scoured the internet machine and put together a collection of what made him wildly popular. Enjoy.

“I think Tyler Seguin is probably a great guy, when he’s sleeping.”

“When @mikefisher1212 and @carrieunderwood ask you to watch your language you listen kids ok.”

“I used to wake up & need some sort of substance 2 start my day. Now I wake up & dance around naked to Florence & the Machine #shakeitout“

He also used his twitter to raise over $12,000 for the treatment center that helped get him clean and back on the ice:

“Hey friends. I’m trying to raise money for a place which helped save my life and is close to my heart. Check out http://t.co/2nLGd44z7V“

And yes, that link in the tweet still works if you want to check out Dicky’s charitable efforts.

We also recommend this short video put together by the Preds on Clune and his road to the NHL which you can check out by clicking HERE.

**Remember you can follow us online for all of the latest and greatest Minnesota hockey coverage at @MNHockeyMag! You can also follow the author of this article, who narrowly avoided having to tell Rich Clune one of her dark secrets in the making of this article, @AmySnow17!**