Hockey is something Warroad and Minneapolis can agree on 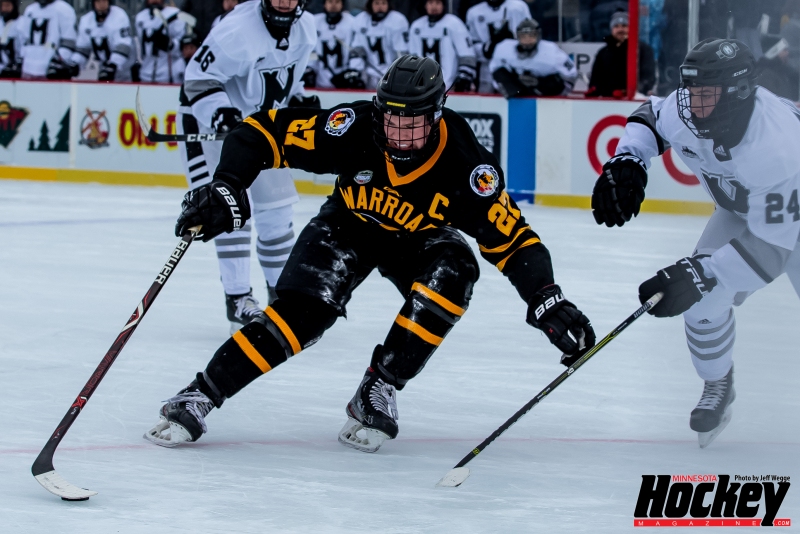 MINNEAPOLIS – The contrasts between the Minneapolis and Warroad boys’ high school hockey teams are anything but subtle. More than 420,00 residents separate the big-city behemoth from its Canadian-border counterpart but tiny Warroad’s hockey success dwarfs that of its major metropolitan antithesis.

They even bore a striking difference in their appearance at Hockey Day Minnesota with Warroad in all black and Minneapolis donning white, virtually from head to toe. What bonds them together, however, is their love for the sport and appreciation for its outdoor heritage.

“I think the kids really enjoyed themselves and the fans enjoyed themselves and I think it’s one of those things that it doesn’t really hit you until next year, maybe, when Hockey Day is on and the kids will look back and say, ‘Hey, that was us last year,'” Warroad coach Jay Hardwick said Saturday. “It’s just great to be a part of it.”

Warroad’s Owen Meeker scored twice and Jayson Shaugabay added a goal and an assist to help lead the Warriors to a 5-1 win over host Minneapolis in the opening game of Hockey Day Minnesota on Saturday morning at Parade Stadium in Minneapolis. 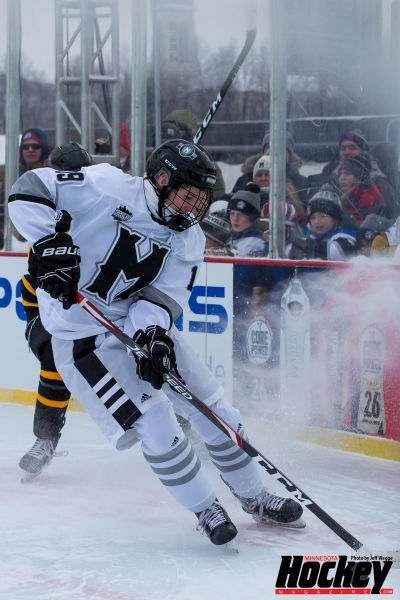 “I think they maybe had a little more speed than we did and, you know, hats off to them, they were good and they won the battles,” Minneapolis coach Jo Dziedzic said. “We had a couple chances there and we just didn’t execute on our power plays. When we did have chances we found the goalie right in the chest but it was fun; our kids loved it and we had a great time.”

Meeker opened the game’s scoring for the Warriors 10:26 into the opening period and Warroad doubled its lead just 1:33 later on Anthony Foster’s shorthanded goal.

Shaugabay scored a pivotal goal early in the second period with his 12th of the season, redirecting a Grant Slukynsky feed inside the right post for a 3-0 Warrior lead. Slukynsky chipped in another assist in the final period to pick up his team leading 37th assist and 61st point of the season.

Overcast skies greeted the teams on arrival Saturday morning and while Friday’s snow had departed, it was replaced by a stiff, bone-chilling breeze out of the West. As the game wore one, breaks in the clouds allowed the sun to peek through.

“We had a couple guys come off the ice and say that, you know, it was tough for him to see when we they were going that way,” Hardwick said. “I asked our goalie after the game about it too and he said it was really tough to see the first part of the third period but, luckily, it didn’t become a factor.”

Slukynsky was denied his bid to add to his goal scoring lead by Minneapolis goalie Alex Lamont whose glove hand came out of nowhere to swallow up a shot labeled for what appeared for a moment to be an open net with 7:25 to play. “That was a beauty and he’s going to remember that one for a while,” Dziedzic said.

“That was a really nice save by him,” Slukynsky acknowledged. “Give the goalie credit, he read the play nice and slid cross and just made a nice save.”

The Warriors were well supported in the big city by a formidable traveling contingent who made themselves known throughout the contest.

“It’s probably pretty quiet in Warroad today,” Hardwick said. “I know there was, I think, eight of our youth teams and numerous other people down here. I looked up in the stands and it was all black and gold and red, white and blue, so it was great to see all the Warroad people down here supporting us.”

Dziedzic says he hopes the long-term ramifications of Hockey Day coming to Minneapolis leads to growing the sport in his hometown and he’s already seeing good signs pointing toward that goal.

“I think we’ve got some young talent that are hockey players and in the past we’ve had some guys that played hockey but weren’t necessarily hockey players,” Dziedzic said. “They’re just getting experience and, as they get stronger, I think we’ll keep growing.”