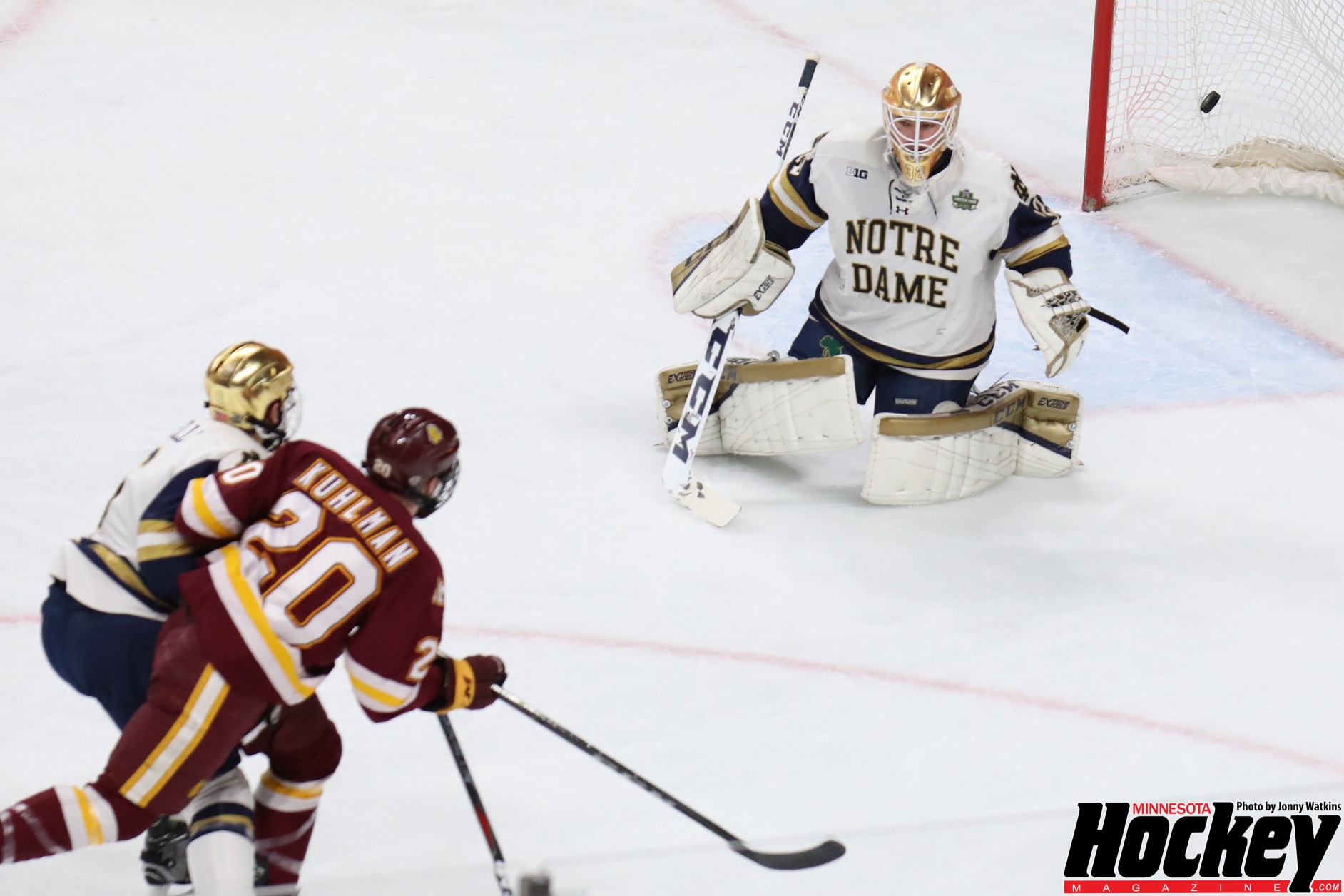 Minnesota Duluth’s Karson Kuhlman (Esko, Minn.) scores his 13th goal of the season at the 9:06 mark of the first period to give the Bulldogs a 1-0 lead over Notre Dame in UMD’s 2-1 Frozen Four championship game win over the Irish on Saturday night at Xcel Energy Center. (MHM Photo / Jonny Watkins)

ST. PAUL — This season, Karson Kuhlman may have spent a little more time with the Minnesota Duluth coaching staff than a typical captain for the Bulldogs.
The Bulldogs had a number of injuries early and UMD got off to a 7-9-2 start to the season with a young team.
But Kuhlman, a 22-year-old from Esko, helped get the team moving in the right direction with his leadership.
He capped it by picking up a goal and an an assist for UMD in its 2-1 win over Notre Dame to pick up the Frozen Four’s Most Outstanding Player honor on Saturday at Xcel Energy Center.
“This year has been fun because our relationship as a coaching staff (with Kuhlman) grew,” Bulldogs head coach Scott Sandelin said. “We had a lot of talks earlier in the year. It was fun to see him kind of mature into the leader that he was.
“There were some frustrating times, but we found a way to get through together … I can’t say enough about Karson. He’s a great kid, great captain for us and I was so excited that he was the Most Valuable Player of this tournament because he deserved it.”
Kuhlman was also the MVP of the NCAA Division I West Regional and led the Bulldogs to four straight one-goal wins in the national tournament.
This was Kuhlman’s first season wearing a letter for a team since he was an alternate captain for the Dubuque Fighting Saints in 2013-14. His teammates voted him as the team’s captain last spring after the Bulldogs reached the national championship game. 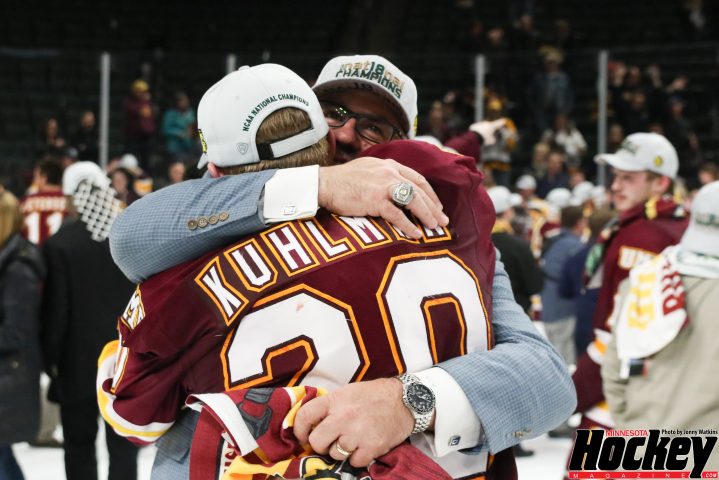 “How to manage games with these younger guys and also how to manage everything from on the ice to off the ice to everything in between. At the end of the day, I couldn’t be happier with how all of them and how they stepped up.”
It helps when the captain is leading the way with his energy and relentless play. In the championship game, Kuhlman also stepped in to help out on a line he had not played a shift with this season.
Freshman left wing Kobe Roth went down with a lower leg injury in the first period. Kuhlman took a shift in Roth’s place and gave the Bulldogs a 1-0 lead with a goal at 9:06, which was 2:45 after Roth left the game.
“We were down to 11 forwards and I just liked the way Karson was playing,” Sandelin said. “He said he was fine to go and I told him to keep his shifts short. It paid off. It was a big goal for us to get the lead.”
Kuhlman got the puck from Jade Miller after Miller stole the puck in the neutral zone. He got it to Kuhlman, who faked a slap shot at the top of the faceoff circle, took a couple strides and then scored on a wrist shot from the faceoff dot.
“I was kind of caught it flat-footed and the ‘D’ man was closing in pretty good,” Kuhlman said of his 13th goal of the season. “I actually had scored on one of those earlier in my career on a really similar play on the catching glove side.”
Then Kuhlman set up the game-winner. Kuhlman and center Jared Thomas were attacking low in the Notre Dame zone. Kuhlman was able to push the puck down to Thomas, who took a couple strides toward the net and scored at 18:39 of the first period for a 2-0 lead.
UMD went on to win its third straight game that the Bulldogs held a 2-0 lead after the first period and ended up winning 2-1, this time to clinch its second national title.
Kuhlman grew up a Minnesota-Duluth fan and was a freshman on the Cloquet/Esko/Carlton High School team when the Bulldogs won their first title in 2011 in St. Paul.
“I remember 2011 and how much it meant to the fans in the whole city,” Kuhlman said. “I just can’t believe it. It’s pretty special.”
Kuhlman is an undrafted player, who finished with 38 goals and 40 assists in 165 career college games. He will graduate this spring with a degree in organizational management after being an NCHC All-Academic Team member for four years.