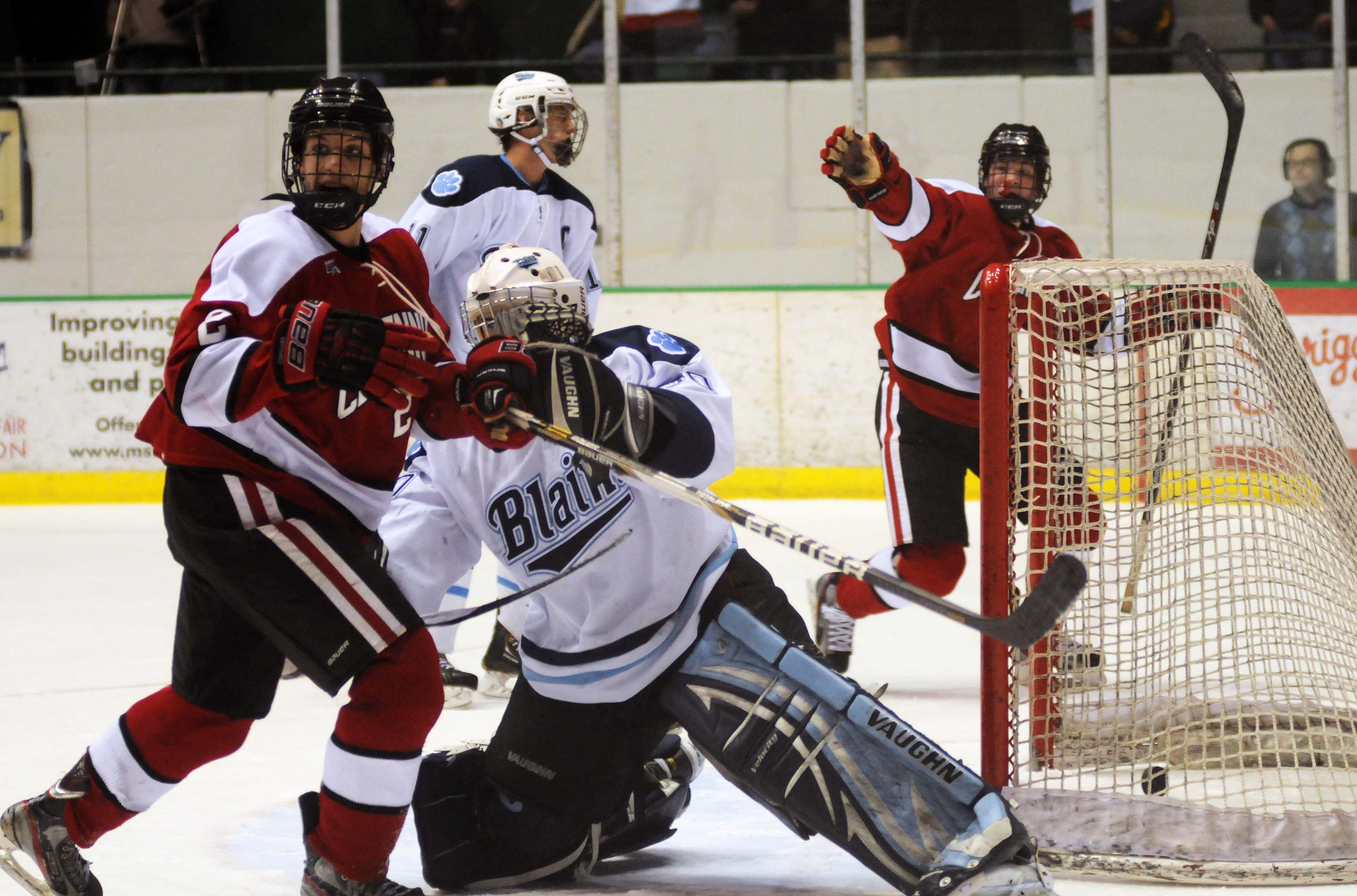 The Cougars celebrate Colin Hughes’ second-period goal which held up as the game winner in Centennial’s 2-1 win over Blaine in the Section 5AA final. (MHM Photo / Jordan Doffing)

SAINT PAUL—In a thoroughly entertaining contest worthy of the spotlight on the State Fairgrounds Coliseum’s final night as a hockey facility, third seeded Centennial took out top-seeded Blaine 2-1 in the Section 5AA final. Despite a heavy 39-18 shots-on-goal advantage, the Bengals found Cougars’ goaltender Blake Miller to be a riddle too tough to solve throughout the night.

“It was nuts but I have to give props to my [defense],” Miller said on his 18th birthday. “I had to make a couple bigger saves but they kept most of the shots to the outside.”

“Millsy played great and kind of bailed us out when we needed him to but 19 other guys played great too,” Centennial coach Ritch Menne said.

Colin Hughes’ wrister from the right faceoff dot at 15:57 of the second period was the difference as Hughes’ shot off a cross-ice feed from Will Schwartz whistled past Blaine goaltender Andrew Houle for a 2-0 Centennial lead.

“I don’t know what went through my mind, I just saw it go in the net,” Hughes said. “I went and hugged my best friend who happens to be the guy who passed it to me and it was probably the best memory I’ll ever have.”

After Schwartz went off for holding at 1:27 of the third, Blaine’s Dallas Gerads tucked a shot between Miller’s pads 1:18 into the power play to pull the Bengals within one. But the Cougars withstood Blaine’s furious attempt to complete the third-period rally, much to the credit of Miller who finished with 38 saves.

“He always brings it every day,” Centennial forward Adam Anderson said of Miller. “He’s a gamer, he’s mentally tough all the time and he brought it physically.”

Miller was on the receiving end physically all night too as Bengals’ players were consistently inside, not only the Centennial crease, but also the net, generally on top of Miller.

“I expected it because it’s Blaine and they’re our biggest rivals,” Miller said.

Centennial advances to make its second straight state tournament appearance while Blaine exits in the section playoffs for the third straight season after six consecutive trips to St. Paul.

“It’s like a bad nightmare,” Blaine coach Dave Aus said. “I give them credit but I’m not sure the better team won here and that’s what’s hard about the last two years. I’ve felt like we’ve been the best team and we just didn’t get the job done.”

Hughes was asked to compare the two section titles.

“It is so much sweeter than last year,” Hughes said definitively. “Back-to back section champions and it’s versus our biggest rival; you can’t beat that.”

True to their predatory namesakes, the Bengals and Cougars ferociously attacked one another right from the opening draw. Bodies were flying in every direction in a fast, physical first period mostly dominated by Blaine which rattled off 19 of the game’s next 22 shots after Rynar Gorowsky scored the period’s lone goal just 15 seconds in.

Menne said the volume of body play was typical of the Centennial/Blaine rivalry which extends to the youth ranks.

“It’s a rough, physical game and they don’t like us and we don’t like them when we’re out on the ice,” Menne said. “It wasn’t disappointing for anybody that paid the money to get in.”

The Cougars were not without opportunities, however, as Gorowsky threatened twice more in the game’s opening 17 minutes.  A shorthanded two-on-one between Gorowsky and Adam Anderson was thwarted by Bengals’ defenseman Alex Copa while Gorowsky’s breakaway effort at 13:20 was denied by Houle. 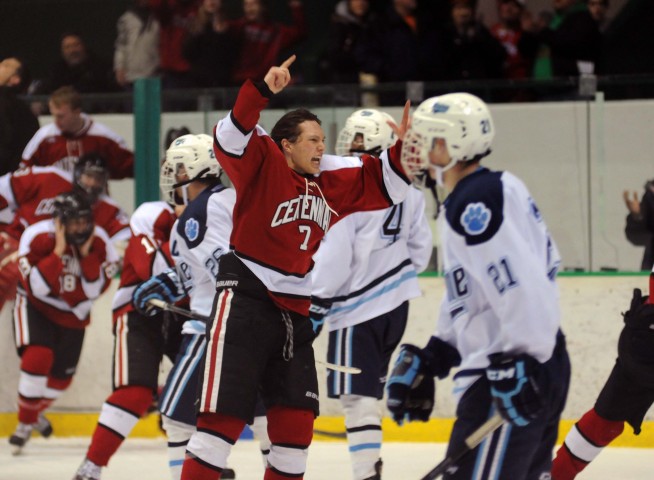 The celebration was on for Colin Hughes after Centennial’s section title win. (MHM Photo / Jordan Doffing)

Blaine swept the regular-season series between the two north-metro rivals, beating the Cougars 3-1 in December and 3-2 on Feb. 1 on Easton Brodzinski’s overtime winner. But when it mattered most, the Cougars found a way to win.

“We didn’t play bad, it’s not like we played poorly,” Aus said. “We just got outscored and, unfortunately, that’s what’s most important.”

“Blaine is an unbelievably talented team and they’re so deep and balanced,” Menne said. “But the guys diving and scratching and clawing to do whatever it takes, it was great to watch.

“To be an alumni of Centennial, I’m just really proud of these guys.”

In the chaos of the post-game celebration, Hughes could be seen wandering as if searching for someone to rejoice with.

“I was just looking for my coach to hug,” Hughes said. “He’s done so much for me and I just wanted to thank him for all the opportunities he’s given us as a coach.”