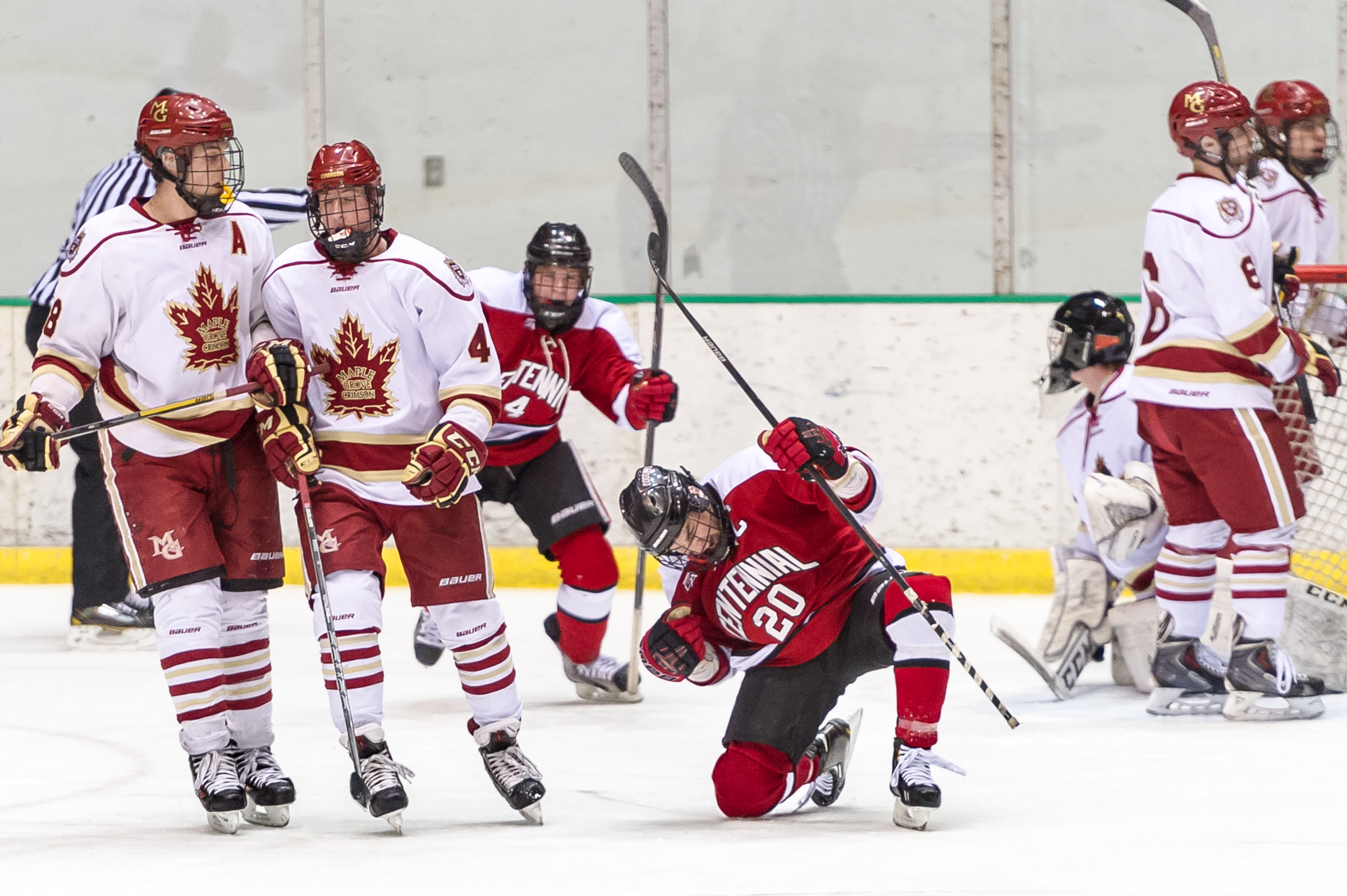 Centennial’s Ryner Gorowsky celebrates the first of his three goals to lead the Cougars to a 4-0 win over Maple Grove in the Section 5AA semifinals. (Photo/ Rich Moll Photography)

SAINT PAUL—Following three straight wins to close out the month of January, the turn of the calendar was not kind to the Centennial Cougars boys’ hockey team. Centennial was just 1-3-2 start in February heading into its Feb. 15 regular season finale against Mounds View with the Section 5AA playoffs looming just ahead.

The Cougars trampled the Mustangs 8-1 that day at the State Fairgrounds Coliseum and returned to the iconic building for Friday night’s Section 5AA section semifinals a more confident and dangerous team than the one that entered it just 11 days prior. Third-seeded Centennial dominated No. 2 Maple Grove from start to finish, advancing them to Friday’s 6:00 pm section final against Blaine with a 4-0 win over the Crimson.

“We feel like we’ve got the swagger back a little bit,” Centennial coach Ritch Menne said. “This is the team we thought we’d have all year long so, to see this, it feels good.

“Everybody is blocking shots and doing whatever it takes to make the team successful.”

Cougar forward Ryner Gorowsky scored his 22nd, 23rd and 24th goal of the season and assisted on a Connor Lovick goal to boost Centennial to within a win of a second-straight state tournament appearance.

“Ryner is a gamer,” Menne said. “Say what you want about him, he plays hard, he produces; he’s huge in big games.

“He can play on my team any day of the week.”

“Millsy’s been great all year,” Centennial coach Ritch Menne said. “He’s kind of flown under the radar, but he played great tonight.”

Centennial outshot Maple Grove 31-18, including 11-5 in a first period in which the Cougars grabbed a two-goal lead on Gorowsky’s first two goals of the game. Gorowsky, a right-handed shot, fired the puck from a sharp angle along the goal line to Brady Goodman’s right and somehow squeezed it past the Crimson goaltender, who finished with 27 saves, at 7:54.

Gorowsky struck again five minutes later when he picked off a Maple Grove defenseman’s pass, made a couple of moves on Goodman and put a backhander under the crossbar from just outside the crease.

“Their defenseman threw it up the middle of the ice and he didn’t see me,” Gorowsky said. “So I picked it off and faked the shot and went to my backhand and managed to bury it.”

After setting up Lovick’s second-period snipe from the left circle, Gorowsky completed his hat trick by scoring into an empty net at 14:49 of the third.