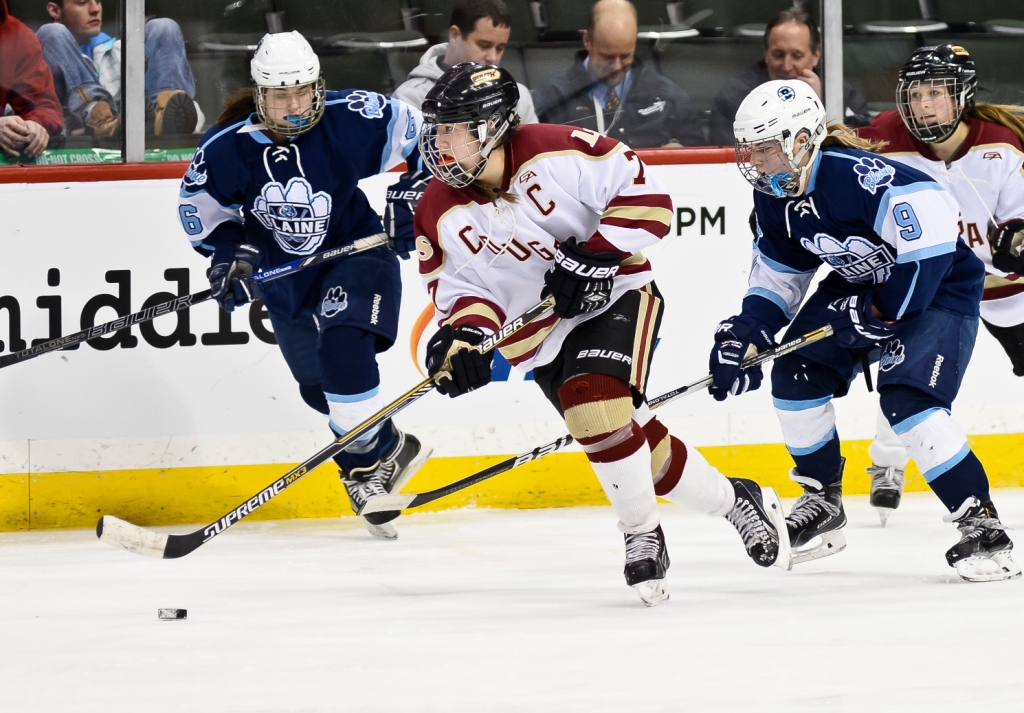 Lakeville South’s Morgan Morse leaves her Blaine foes behind on her way to a hat trick in her state tournament encore as the Cougars earned a 3-1 Class 2A quarterfinal win over the Bengals on Thursday night at Xcel Energy Center. (MHM Photo / Tim Kolehmainen)

SAINT PAUL – Senior forward Morgan Morse made her last appearance in the state tournament as an eighth-grader in 2011 when the Lakeville South Cougars fell short to Hill-Murray 4-3 in the state quarterfinal.

With a hat-trick performance, Morse lifted her team past the Blaine Bengals with a 3-1 Class 2A quarterfinal victory Thursday night at the Xcel Energy Center. The Cougars will face the top-seeded Minnetonka on Friday night at 8 p.m.

“I think Morgan [Morse] is one of the most underrated players in the state,” Darwitz said. “No doubt that there is a great senior class of hockey players. But I don’t think [Morse] got the credit she deserved all year.” 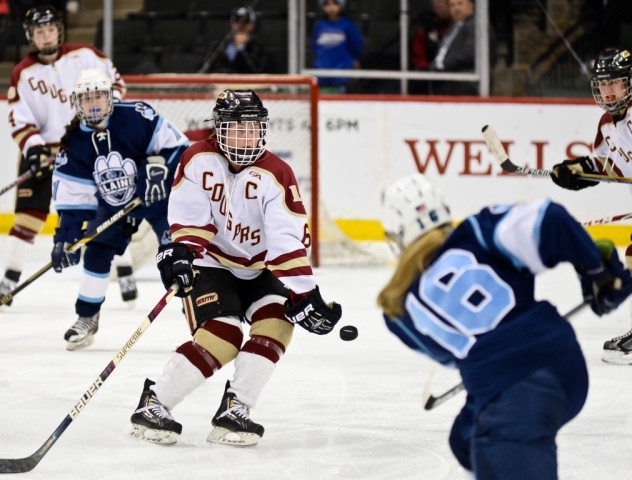 “This year is a lot more exciting,” Morse said. “My eighth grade year, I maybe got a few shifts here and there. But now being one of the lead players getting shift after shift, it’s much more exciting when you get to experience everything in a better view.”

Before the state tournament even started, Morse experienced what she called the biggest play of her career when she ended Lakeville South’s four-year state tournament drought with an overtime winner against cross-town rival Lakeville North in the section 1AA final.

Now set to play the battle-tested Minnetonka Skippers in Friday night’s state semifinal, the Lakeville South Cougars may very well need Morse to make another big play in order for them to play for a state championship.

And if Thursday’s hat trick performance is any indication, Morse will be more than ready to provide a spark for the Cougars.

“Getting that goal to finish [the game] off just lit a match and it just kept me rolling,” Morse said of her game-winning goal in the section final. “It’s exciting to be back and not being at home if we had lost that game.”