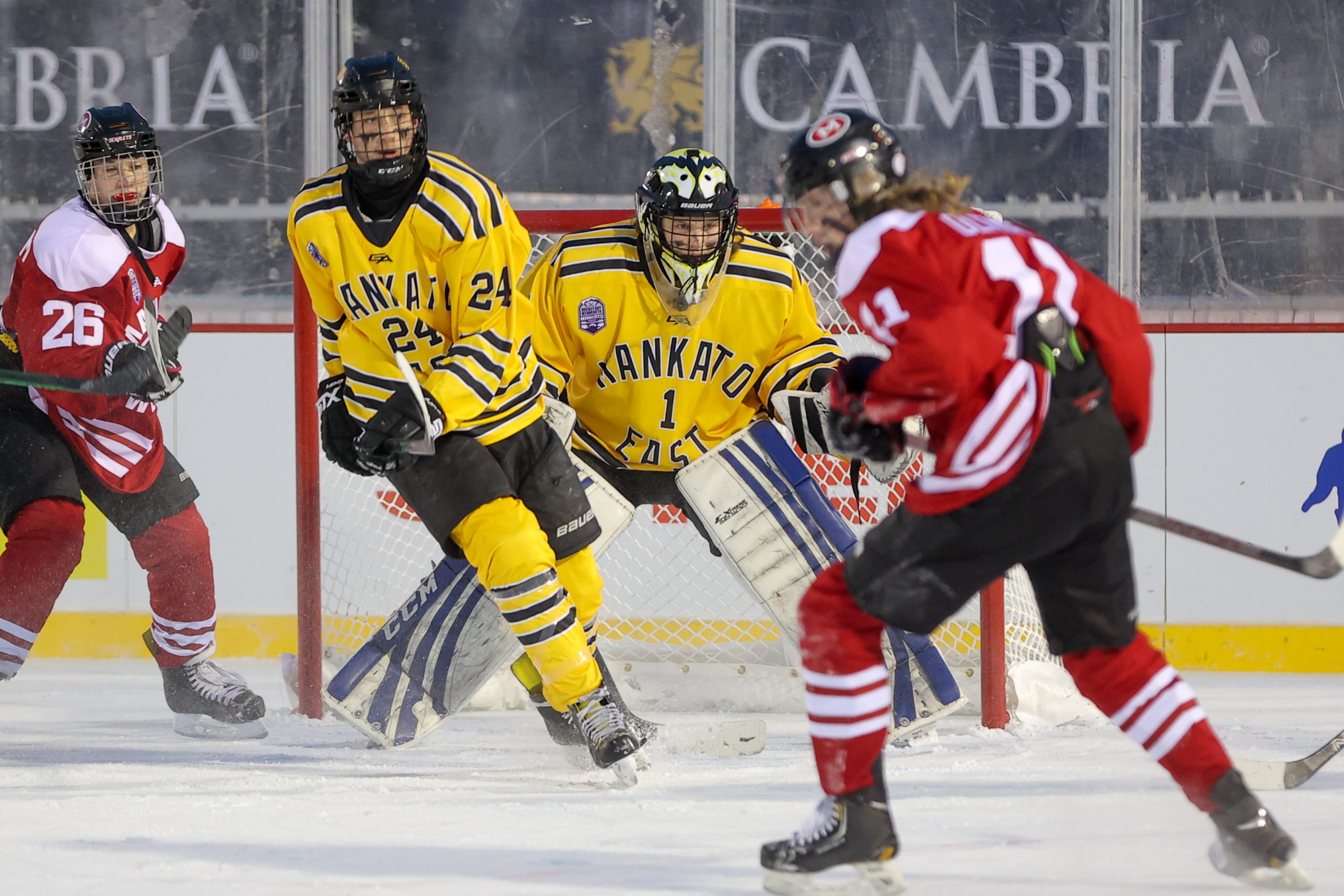 Mankato East junior goaltender Luca Barnett is laser-focused on the puck in the third period of his 5-0 shutout win over Mankato West in his first varsity appearance for the Cougars at Minnesota State’s Blakeslee Stadium in Mankato. (David Faulkner / SPX Sports)

MANKATO, Minn. — Mankato West coach Nate Olsen spoke recently about his players’ desire for “just a touch of snow” to provide ambience for their Hockey Day Minnesota eve meeting with crosstown rival Mankato West Loyola. The Scarlets got more than they bargained for from both the elements and the Cougars as East cruised to a 5-0 win on a snowy and breezy Mankato night.

A shutout is no small feat under normal circumstances but this one was far from ordinary. With starting goaltender Caelin Brueske’s jersey hanging from the glass behind the East bench, junior Luca Barnett stepped into the crease for his teammate, who missed the game due to illness, stopping all 10 West shots in his first-ever varsity appearance.

“Just stop the puck, that’s all I was thinking about,” Barnett said of his varsity debut, holding a mini hockey stick tight to his chest. “I don’t think it really hit me until the game was over and I was surrounded by everybody screaming my name.”

“Our guys went out there and played for him to make sure that he could get that one,” East coach Adam Fries said of his long-haired emergency goaltender. 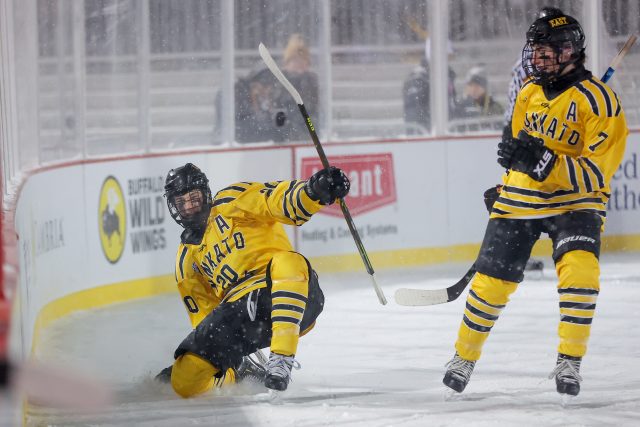 Mankato East junior goaltender Luca Barnett is laser-focused on the puck in the third period of his 5-0 shutout win over Mankato West in his first varsity appearance for the Cougars at Minnesota State’s Blakeslee Stadium in Mankato. (David Faulkner / SPX Sports)

In a game marked by blowing and drifting snow delaying puck drop by 14 minutes and leading to multiple first-period shoveling stoppages, Cougars junior defenseman Shae Gavin plowed through the snow for two goals and an assist in the first 17 minutes. Gavin took a break between scoring his eighth and ninth of the season to help set up Parker Anthony for his sixth of the year for a 3-0 East lead after one period.

Olsen said the Cougars adjusted to the conditions quicker than his Scarlets in that stickhandling through the snow drifts would prove to be difficult.

“We really struggled to get the puck out of our own end,” West coach Nate Olsen said. “What we needed to be doing was just shooting it high off the glass, getting it out and letting it run.”

East did not go undefeated vs. the snow as Cougar forward Quintin Steindl’s first-period breakaway opportunity was thwarted by a snow pile in the slot. Later in the period, Gavin found himself in a similar situation but maintained control and scored. “I let him know,” laughed Gavin, referring to Steindl.

“It was very frustrating,” said Steindl through a smile lifting his eye-black covered cheeks. “I got a lot of jabs from my teammates and stuff. … It’s one to remember, though.”

What Steindl will remember more is Anthony finding him streaking up the slot with a pass and slamming home his sixth of the season late in the second period to close out the game’s scoring.

But, as Olsen says, the game made for plenty of memories to go around for both teams and the final outcome will land pretty low on the list no matter what jersey was worn.

“They’re going to remember the locker room and their buddies,” Olsen said. “It was as pure as the game gets out here with the snow and a little wind. In Minnesota, what more can you ask for?”