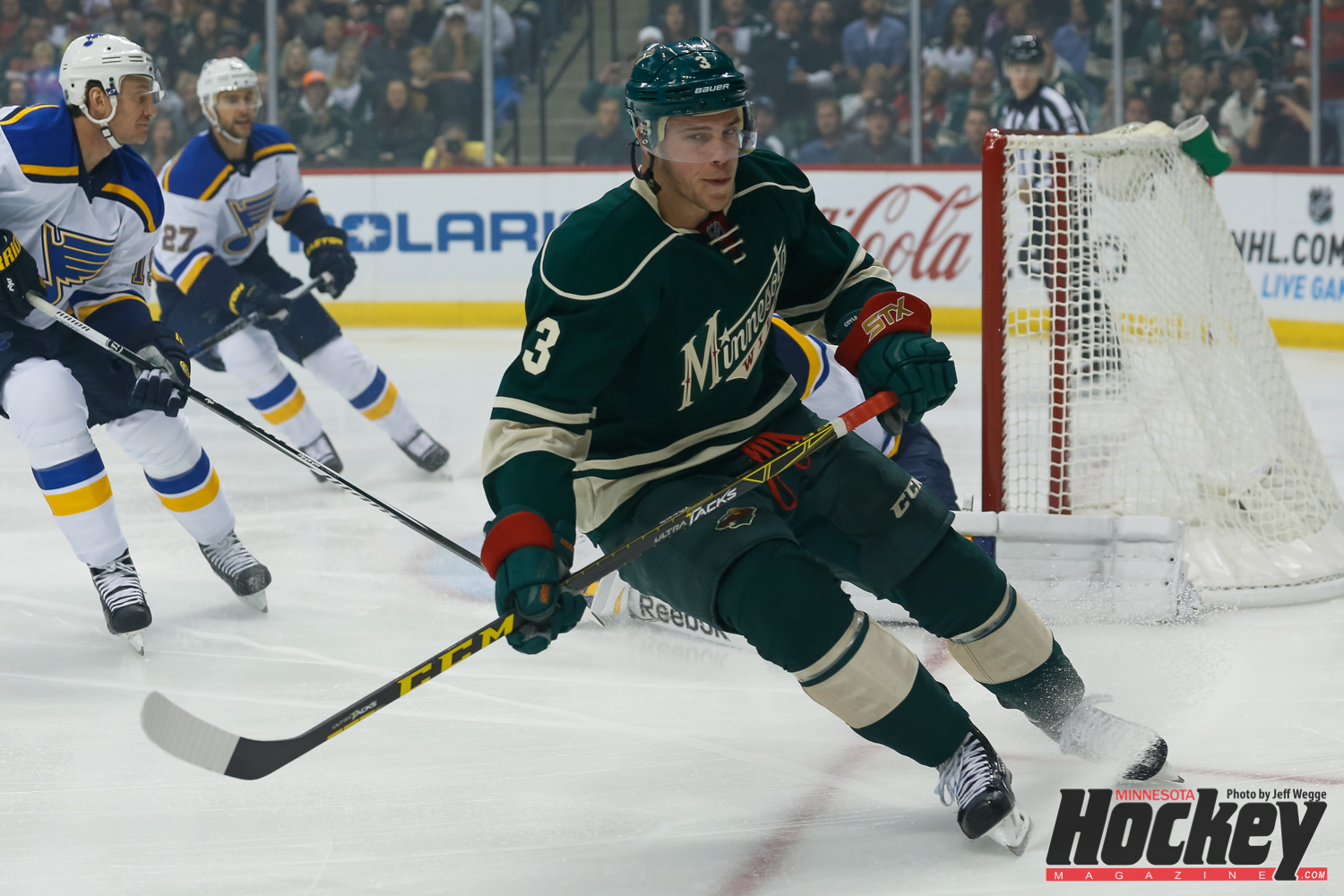 Two games into the season and Devan Dubnyk appears to be the same rise-to-the-occasion goaltender he was a year ago for the Wild.

Zach Parise, too, has so far been sensational.

The list of guys expected to step up is a long one.

So far, Charlie Coyle appears to be the prime example of doing exactly that.

Coyle scored two goals Saturday night, the first a marvelous solo effort in the first period and the second a simple carom off his body on a pass from Thomas Vanek, as Minnesota opened the home portion of its season with a 3-2 victory over the St. Louis Blues in front of 19,096 at Xcel Energy Center. 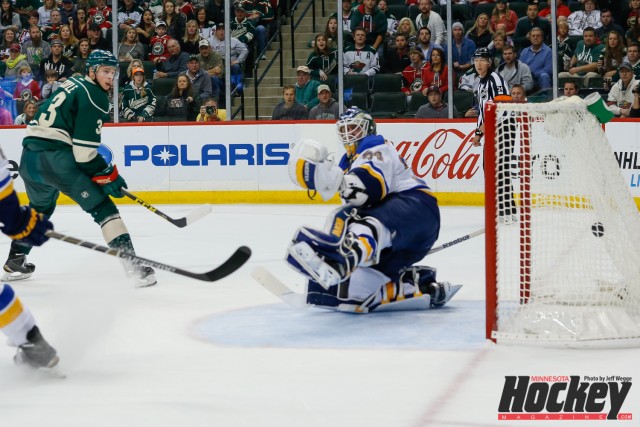 The scintillating first goal gave the Wild a 1-0 lead, and Coyle did all the work by chipping the puck up the boards to himself, shaking off two defenders and lifting home a backhander with just eight seconds remaining in the first period.

It drew oohs from the standing-room crowd, but came as no surprise to Dubnyk.

“I told him, ‘That was Marshawn Lynch on the ice there,’ he was just throwing guys off of him and getting to the end zone. It was pretty awesome to watch.”

The 6-foot-3 Coyle, whose rights came to Minnesota as part of a trade that sent Brent Burns to San Jose, is just 23 but is showing more and more that he has the ability to use his size as a weapon.

Coyle had three shots, three hits, one takeaway and two goals against the rugged Blues in 16 minutes, 55 seconds on the ice.

“He played the type of game that we needed him to play against that team,” Wild coach Mike Yeo said.

Another on the list expected to hike his production is Vanek.

Vanek scored in the opening win at Colorado, then ripped the puck into the crease from deep in the corner for what was announced as his 300th NHL goal.

No. 300 will have to wait – after careful video analysis, the goal was awarded to Coyle.

Success stems from keeping his feet moving, according to Coyle.

“That kind of creates my energy,” he said, “and our team’s really doing things well, too. Just moving the feet, moving the puck, and getting body position around the net. That’s what I tried to do tonight.”

Inject four goals from the extraordinary Parise plus solid goaltending from Dubnyk and the Wild have started the season 2-0.

“I’m comfortable where I’m at,” said Dubnyk, who finished the evening with 30 saves. “I’m trying to build. It’s early in the season, so there’s good things and bad things. You sharpen up as you go.”

“It’s good to get wins this time of year,” Yeo said. “Nobody’s on top of their game, but when you get wins when you’re not on top of your game, that’s a good thing.”

Other guys expected to step up along with Coyle and Vanek – guys such as Mikko Koivu, Jason Pominville, Mikael Granlund, Jonas Brodin, Matt Dumba and more – can take heart from the fact that they and their teammates have four days to work on things prior to Game 3 Thursday at Arizona.

“Our only mindset,” Yeo said, “is we have to get better.”