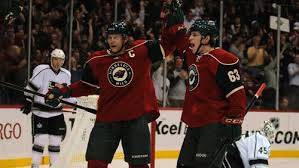 At the midway point of the preseason, the Minnesota Wild picked up their second win in as many games as they topped the Winnipeg Jets by a score of 4-3 in a shootout.

The Wild are looking to solidify some question marks in their lineup as the melding of veterans and incoming young players continues to be a process. Young centers Charlie Coyle, Mikael Granlund continued to make their case as to why they should be a part of the every day lineup. Both players provide the Wild and opportunity to fill a hole that was left as Matt Cullen who bolted for Nashville via free agency.

The Wild have a number of young and talented players that are a year wiser and working to keep their game in the NHL. Coyle, sporting a new number 3 on his sweater. He moved to center from wing and was impressive Saturday night as he centered rookie Justin Fontaine and veteran Dany Heatley.

“He was a horse in both ends of the rink,” Wild coach Mike Yeo said of Coyle. “Obviously scoring the goal, (Coyle was) all over the ice.” Yeo also noted that the Wild center was effective in the face off circle. Coyle won 80% of his face-offs which is a difficult thing to accomplish from the center ice position throughout a game.

Yeo went on to add that Coyle benefited from his work in the face-off circle as he scored Minnesota’s second goal of the game late in the first period. “His goal was a direct result of that. He’s doing all the little things right.. A big powerful guy who looks to have another gear in his game, especially coming through the middle of the ice playing center right now.” 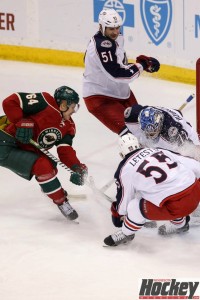 “I thought he looked great,” Yeo said of second year center Mikael Granlud. “He didn’t get the goal Charlie got but I thought that he had a strong game tonight too. It’s good to see both of those guys continuing to push.”

Coyle received an endorsement from captain Mikko Koivu after the game when asked of the young centerman’s performance, Koivu stated, “I think he is more comfortable, that’s for sure. I think on and off the ice which is natural and I think you see that in his game too. He’s more confident, if he can’t be stronger, I think he is stronger on the puck and shooting the puck well.”

There are a limited number of roster spots available and the battle is heating up as the Wild look to find the right balance to be elevate their game this upcoming season. Yeo expects to see more as the team will be using the entire preseason to make their decisions.

“We are only three games into it,” Yeo said of the preseason. “We are half way through our exhibition season right now and we said we weren’t going to make any decisions or rush to any decisions and we were going to use the whole preseason. Both guys (Coyle and Granlund) are doing the things we are looking for.”

A couple of other young players that made cases to be looked at further were Justin Fontaine who picked up an assist and the #3 star honors for the game. Nino Niederreiter also executed a number of things for the Wild and utilized his big frame to his advantage making for an interesting second half to the preseason.