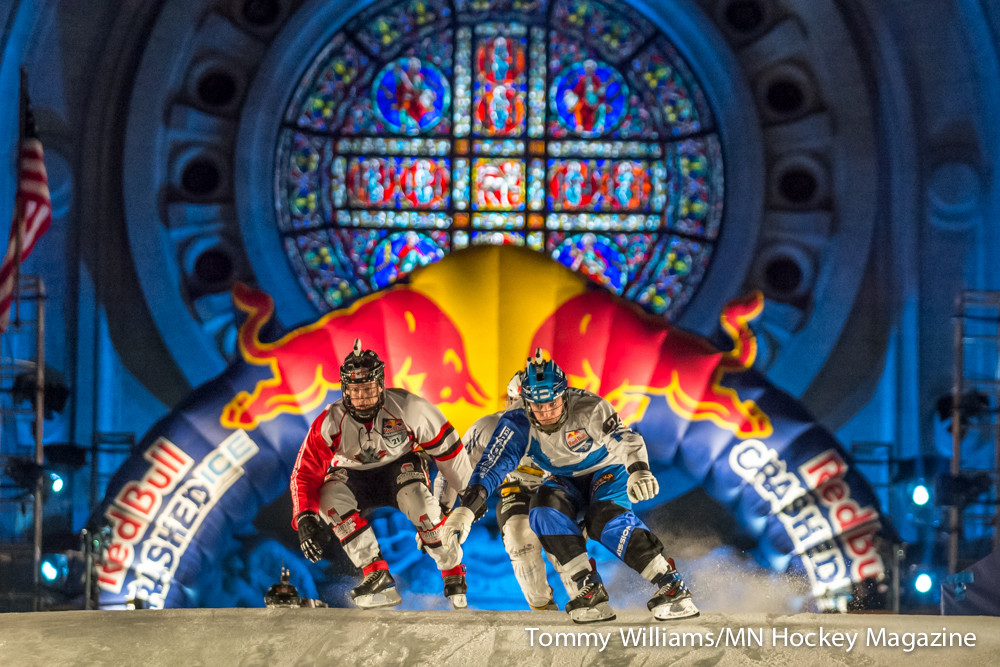 What was I thinking? At fifty four years old, I thought it would be a great idea to be like one of my favorite all time sports authors, George Plimpton, who once wrote a book called The Paper Lion. Plimpton wrote about his experience as an NFL professional football player, training and playing in the preseason for the Detroit Lions. He gets creamed as the quarterback in a preseason game and lives to tell about it.

I had been speaking for several months to some of the local Red Bull executives, on how we could help,  and inquired about skating the course.  We did get credentials  for myself and our staff  photographer, with the media tent and VIP passes that included awesome food and beverage from one of St. Paul’s finest eatery’s (Cosetta’s), but they never said anything about being allowed on the track.

The course and the crashes was the real reason people came out in tens of thousands to see, just like NASCAR race fans, it’s the thrill of speed with the chance for a wipeout that attracts these huge crowds. The fans were not disappointed as the course had skaters crashing from start to finish.

With speeds reaching over 40 miles an hour on a course so wild that a two time Olympian passed on skating it, the event was a huge success with a world record crowd of over 140,000 people.

The sport is now approaching its teen years and is at a tipping point for becoming mainstream. The true challenge is not finding athletes daring enough to try, but finding courses to skate.  The courses are few and far between, and typically are taken down, shortly after the last race is over.

To help bring about the change, Afton Alps in Afton Minnesota built a course that was used the weekend before as a qualifier for the big race the next weekend in St. Paul. The course was so fast that it was more about the skaters staying under control as the speed on the hill was in excess of 60 miles an hour with a fifty foot jump at the end.

Maybe I can do this.

The last time I had experienced anything near what the crashed ice course would be like, was over 25 years ago, as for fun, I skated down on roller blades the steep incline road that is off of Mississippi Boulevard and goes down to the Ford Lock and Dam.  I tucked like a downhill skier and soon picked up great speed, and once managing the sand at the bottom, realized a chain length fence crossed the entire street.

Luckily for me, someone left a gate open to the viewing area of the lock and I was able to make two very hard 90 degree turns, and then coast all the way along the lock.  After coasting several hundred yards, I put on the breaks for what was one of my most thrilling moments on skates.

I then skated up the road and it’s incline and when I got to the top, several people were gawking at me as one man in roller blades came up and said “you didn’t skate down that?” I told him “it was awesome, but just be careful about the fence.”  He didn’t skate down the hill and just shook his head.

One thing I learned from my previous  experience of down hilling on blades was to look before you leap. I keenly surveyed the Crashed Ice course, walking it from top to bottom multiple times, and watching people crash in various spots. One thing that was for certain, is that if I did skate the course, it would not be as a racer as my goal would be to just get down in one piece.

Several of the younger guys that I skate with down at Saint Mary’s Point  on Wednesday nights had skated the course and encouraged me, including Craig Kaufmann, who played high school hockey at Hill Murray,  saying  “it was an incredible thrill and as long as you take it somewhat easy, you would be fine.”    One of my line mates, Tim Price from South Saint Paul, encouraged me as his son Sam did qualify after doing well at Afton.

I caught up with Tim on Thursday as we went out to see his son do the two practice runs.  See Sam’s practice run from his  GoPro here.  Tim’s words , “you can do this, just keep your weight forward” were reaffirming as he showed me the video of his son qualifying.

I interviewed several skaters who had been in racing for the past 10 years.  The two Canadian skaters who are on the tour as their ranking is above 64 told me that they know no one has died or become paralyzed by crashing, but the crashes have broken many bones,  with legs and shoulders being most common.  The skaters only get a few runs on the course and pick up most of their knowledge by watching others.  I was on the right track.

I then interviewed one of the final 16 female skaters who would be skating in the round of 16 on Saturday night to get her take on what it is like.  I was thinking at this point, if she can do it, so can I, after all I’m a guy.  The petite woman who had a very pretty face with all her teeth intact gave me encouragement.  The Austrian skater has been playing hockey on Men’s teams and had won a crashed ice event 2 years ago in Canada.

Head coach Charley Wasley played in the early 90’s for Edina High School and when his high school coach Willard Ikola retired just before the start of his senior year, he was asked to join the St. Paul Vulcans and play Junior A hockey for Mike Guentzel. He made the move to play juniors, which at that time very rare. He had a solid year and then played 4 years at the U of M under Doug Woog.

Wasley was drawn to the sport when it was first getting going and after his racing days were over, became the head coach of the USA team, helping with their training, nutrition, and financial packages.

When I told Coach Wasley of my desire to skate the course it was met with a lot of skepticism.  Even though he once finished in 4th in one of the crashed ice events, he had a unique perspective saying “You are better off that they didn’t get back to you, as the last time I skated a course competitively, I crashed  and tore up my shoulder”.

As Wasley showed me where the athletes put on their skates, and then walked me up the three flights of stairs that are on top of the steps of the Saint Paul Cathedral, I was thinking I can do this.   We went up to the starting gates and saw a breath taking view of the cities, as even though this was over an hour before the first race, tens of thousands of people were already claiming their spot to view the racers crashing.

As the race began,  it was looking bleak that I would have an opportunity to do the course so I made my way down to the VIP viewing area down at the finish line.  When I got down there, I almost felt guilty, as instead of being crushed by the 100,000+ fans, I found myself in a prime viewing area with access on the boards lining the track.

While watching the racers I struck up a conversation with a person in a Team USA Speed skating  jacket.  He had told me he had qualified in a contest, based mainly on being a two time Olympian, and was flown out by Red Bull with all expenses paid to compete.  At forty two years old, and with a family and three kids to support, along with  his responsibilities owning a training facility in Colorado, he took a good hard look and made a different decision.  He told me “knowing all of my responsibilities and my competitive personality, I had to back out, as the risk of injury outweighed the reward of competing.”

With this last  interview, I think the good Lord was trying to talk some sense into me, as although I wanted to compete, I couldn’t and maybe that was what was best for me.  At the VIP after party, I ran into the executive that I was working with and asked him why he never responded to my request of skating the course.  He smiled and said “Don’t take it personally, as they won’t even let me skate on the track.”

With that I  took him up on his drink offer, grabbed a Red Bull, and called it a day.  Even though I didn’t get to skate the course, I had an amazing day at an amazing event, that I hope comes back to St. Paul next year.  Who knows, if it does, maybe I will get my chance next year.

You can view some great photos of the event here by MHM’s photographer, Tommy Williams.