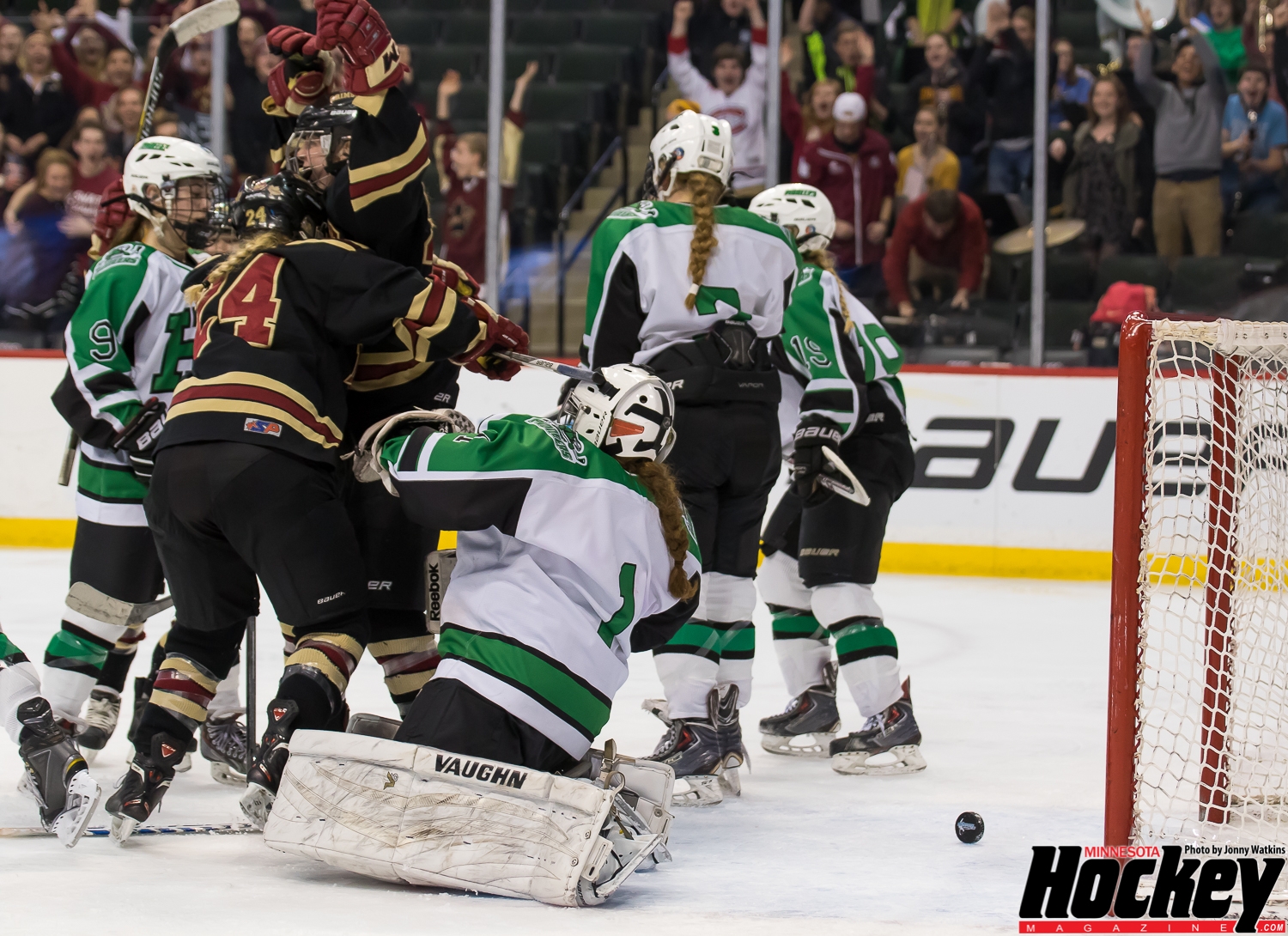 Plus, they beat the two-time defending champs to get there. Not too shabby.

The fourth-seeded Maple Grove Crimson (22-5-2) pulled off the upset with a 1-0 shutout victory, despite being outshot 43-15, over top-seeded and defending champ Hill-Murray (28-1-1) in the Class 2A semifinals Friday night at Xcel Energy Center.

How big was the upset? Well, Hill-Murray was on a quest to become the second consecutive school in Class 2A to win three state titles in a row. The Pioneers saw their 40-game unbeaten streak snapped. The last time they lost was Jan. 17, 2015 by a 3-2 score – to Maple Grove.

Maple Grove junior goaltender Breanna Blesi faced 43 shots from the Pioneers and kept every single one out of the net. She gave credit to her team’s “really good defensive zone” play.

“To be honest I’m always nervous for every single game,” Blesi said. “I don’t really have anything to say except for I love my team and everyone on it.”

Coach Amber Hegland credited her Crimson with playing their system in from of Blesi.

“But Bre made some key saves and played phenomenal,” Hegland said. “This was a game that we needed Bre’s strengths.”

The only goal of the game came from Crimson leading scorer, Wente, in the middle of the second period just 21 seconds into a power play. Wente punched in a rebound into an open net right in front. That was the ninth shot of the game for Maple Grove at that point, compared to 28 for Hill-Murray.

It was Wente’s second goal of the tournament and 29th on the season. Lauren Kaufman and Maia Martinez had the helpers.

“The puck was just standing there,” said Wente, who had six of the team’s 15 shots on goal.

As the game went on, Hill-Murray senior Mekenzie Steffen thought her and her teammates became more relaxed. They outshot Maple Grove 19-4 in the first period, 13-7 in the second and 11-4 in the third.

“We just couldn’t score,” Steffen said. “We thought we could sneak one by, but I guess not.”

With that amount of shots in a low-scoring game, it seemed like the tying goal would materialize for the Pioneers. But time just kept ticking down toward the end of the game.

The Crimson even survived a Hill-Murray empty net and a late too many players on the ice penalty.

“The whole third period I kept looking at the clock, and I swear to God it stopped for like, 10 minutes,” Wente said.