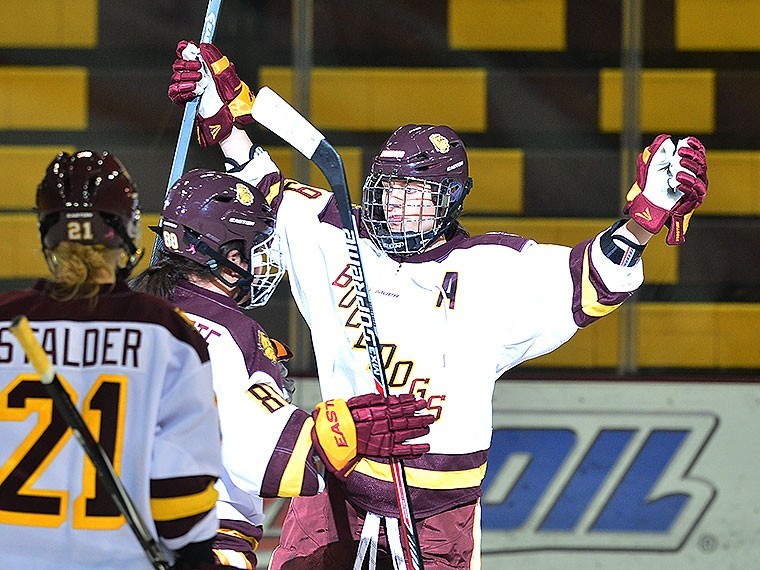 Currently the 14th all-time scorer in University of Minnesota Duluth women’s hockey history, Jenna McParland never put much thought into the Bulldogs 100-point club until she was knocking on the door to the exclusive club. It’s a list that reads like a who’s who of UMD hockey, with 10 Olympians, five All-Americans, and four Patty Kazmaier Award Finalists. While McParland didn’t put any thought into the offensive prowess she would share with those 19 other 100-club members, she did think about the one thing 14 of them had — a NCAA championship ring.

McParland came to Duluth via Toronto, where she spent two years with the Toronto Aeros of the PWHL. After graduating from high school in Toronto in 2010 from Robert F. Hall High School, she spent a third year in Toronto before landing at UMD.

For McParland, Duluth was a homecoming of sorts. McParland spent more than three years away from her home of Schreiber, Ontario — she spent all that time away from her very close, and very big family.

“It means a lot having family to be able to come watch me play,” said McParland. “I moved away from home at a young age, and when I did, my family couldn’t come and watch me as much. Now that I play so close to home, they come almost every weekend we have home games.”

To say McParland’s family is large is an understatement. While her immediate family includes two older hockey playing brothers (brother Nick currently plays hockey in the ECHL, Steven plays for Providence), her extended family has deep roots in hockey — including many of her 40 first cousins.

“I come from a very big hockey family,” said McParland. “Most of my uncles played in their day and almost all of my male cousins, so any time they get the chance to watch hockey they have no problem coming to support a family member. My parents already mentioned to me that there will be about 30 family members here for my senior weekend.”

What those family members have seen over the past few years should make them proud. McParland led the Bulldogs in scoring both her junior ( 11g, 22a, 33 points) and sophomore seasons (11g, 17a, 28 points) and netted a career-high 21 goals in addition to 11 assists for 32 points as a rookie in 2011-12. Recognized every season for her on ice-performances, McParland landed All-WCHA Rookie Team honors as a freshmen, an All-WCHA Second Team selection as a sophomore in 2012-13 and All-WCHA Third Team accolades last season. This season, the alternate captain has scored seven goals and added 11 assists, which includes a game-winning, power play and shorthanded goal.

“Jenna’s been a stable offensive threat for our team on a consistent basis, but has also developed into a good defensive player,” said head coach Shannon Miller. “Jenna is smart, plays with instinct and is a key player for us this season. Because she is from Schreiber, she attracts a lot of high spirited family and friends to our games. She has been a great addition and is an important piece in our quest to finish strong this season.”

Nothing matters more to McParland then exactly how this season finishes. Not the record books, not the accolades — just the one goal she has had in her sight from day one.

“I have learned a lot of life lessons and have grown as a person in so many ways over my four years,” said McParland. “I am much more mature as a person and a hockey player, but my main goal has never changed. My biggest goal is to win a national championship.”

For McParland, this season represents not just her last chance of reaching that goal as a Bulldog, but arguably her best chance in four seasons. Her Bulldogs are ranked No. 6/7 in both national polls, but more importantly, seventh in the PairWise rankings. UMD owns an overall record of 17-7-4 and is unbeaten in six of its last seven games.

With the NCAA Frozen Four in Minneapolis, Minn. in March, one thing is for certain if the Bulldogs earn the right to play on women’s hockey biggest stage. Not only will Jenna McParland have a shot at her biggest goal as a collegiate hockey player; she will undoublty have the biggest cheering section in Ridder Arena to help her and the rest of her UMD teammates acheive it.

Kelly Grgas-Wheeler is the women’s hockey sports information director at UMD. In addition to those duties, the Duluth East High School graduate has also spent more than a decade as an assistant coach of the Bulldogs’ women’s soccer team.