St. Cloud Cathedral’s Will Hammer ties school points record in
8-1 win in Section 6A quarterfinal win over the Flyers. 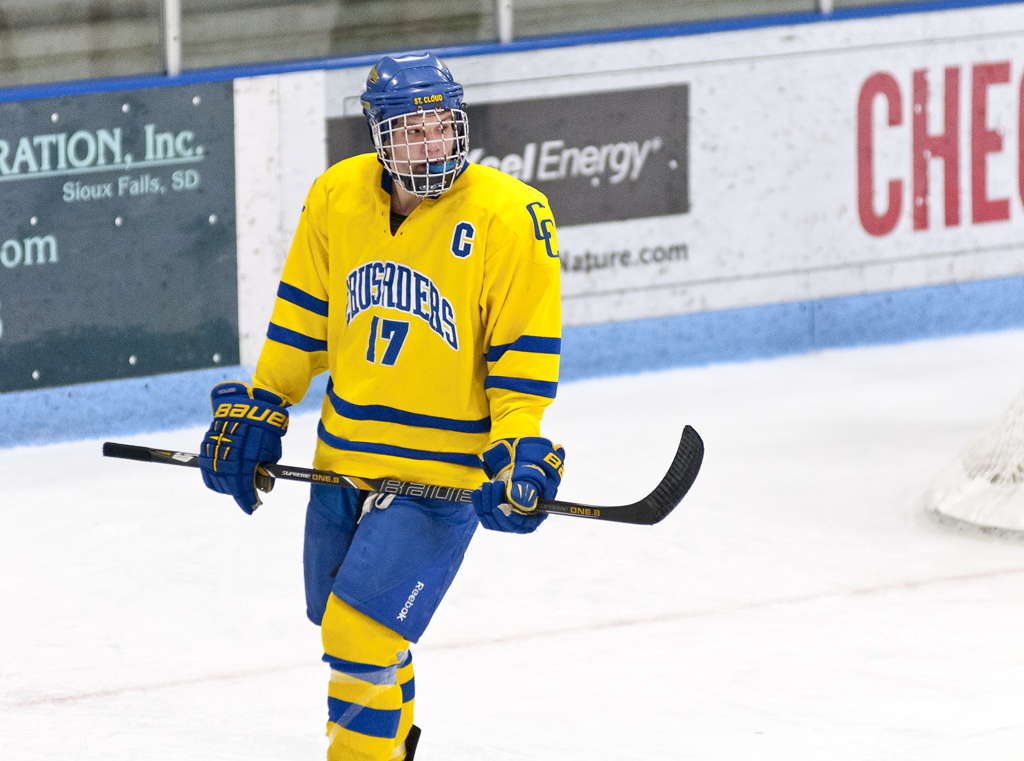 The Municipal Athletic Complex in St. Cloud played host to the Section 6A quarterfinals on Tuesday night where No. 1 seed St. Cloud Cathedral sailed past eighth-seeded Little Falls 8-1.

The Crusaders came into the game holding a 17-7-1 record, while outscoring their opponent’s 91-57 throughout the season. This proved to be too much for the 3-20-2 Flyers.

The puck finally dropped well after the scheduled game time, with the referees showing up an hour late to the prior game between Fergus Falls and St. Cloud Apollo (won 3-0 by Apollo).

The first period showcased the speed and athleticism of the Crusaders, remedied by a more physical, blue color type of hockey for Little Falls.

The Crusaders found some grade-A opportunities through the first half of the first, including multiple chances on two power-plays. But Flyers’ junior goaltender Ezra Spandl was up to the challenge. Spandl finished with 14 saves in the period.

At the 14:41 mark of the first, the Crusaders managed to find the twine after a nifty move on a two-on-one by sophomore Logan Neu opened up his teammate Matson Courrier who buried the opportunity.

56 seconds later, Cathedral struck again, this time coming from senior forward William Hammer, who was the beneficiary of a great stretch pass by Matt Fritz.

The goal put Hammer one point away from the all time lead at St. Cloud Cathedral.

Down but not out, little falls lit the lamp with 12 seconds remaining in the period on a great individual effort by sophomore Landon Bjorge, putting the Flyers down 2-1 going into the locker rooms.

“One our goal was to score first,” Flyers head coach Tony Couture said. “We left it all out on the ice that first period, and we didn’t have anything left after that.”

Play continued in the Little Falls zone through the majority of the second period. However, Spandl and the boys in purple held in there, keeping Cathedral scoreless through the first 7:15 of the period when Crusader junior defenseman Peter O’Neal found the back of the net.

Assist were given to Colin Strong and Daniel Bailey on O’Neal’s backhanded goal from the slot.

The gold and blue struck again at the 10:40 mark on a shot from the point by Bailey, giving the Crusader’s a 4-1 lead over the Flyers into the locker room.

“We dialed up our intensity in the second and third,” Crusaders coach Eric Johnson said. “For whatever reason, it seems like every team comes out a little rocky in the first period.”

A reasonably back and forth third period ensued until the 5:29 mark, where Chris Hornung beat Spandl five-hole for his third goal of the season.

“I wouldn’t be here right now if it wasn’t for my teammates,” Hammer said. “It has been a thought in the back of my head, but I never really knew where I was at on the list.”

“He’s strong on the puck, he’s got good vision, and he does a lot of the little things well,” Johnson said.”He’s as complete a player as you can have … sometimes he’s not the flashiest but he’s been very consistent all season long.”

Brady Johnson put Cathedral up 7-1 with a shorthanded goal, which was followed shortly after by another O’Neal goal. O’Neal’s goal solidified their 8-1 victory, with seven different players scoring goals.

“It was good to get some of those other guys going on the score-sheet,” Johnson said. ”We haven’t had that in a while.”

“You’ve got to give a lot of credit to Cathedral,” Couture said.”They work extremely hard, play very disciplined, and play no-nonsense hockey.”

The Crusader’s will be back in the MAC arena on Saturday evening for the semifinals at 7:00 p.m. to take on the Sartell Sabres.

“Discipline is number one,” Johnson said of the key to Saturday night’s matchup. “We’ve both improved since December … I’m sure it’ll be a very, very good game.”

Cathedral and Sartell split their season series with a pair of 3-2 decisions in December.