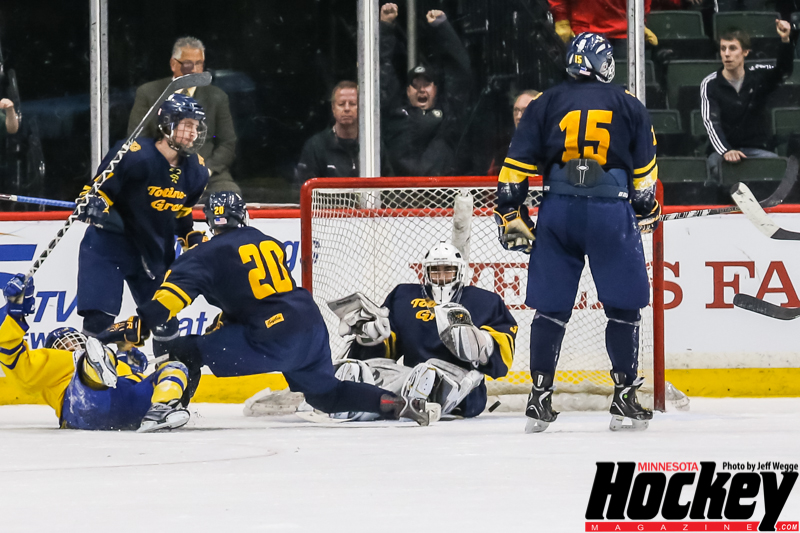 St. Cloud Cathedral’s Erik Gadbois (left) celebrates his overtime winner with his back flat on the ice in the Crusaders’ 4-3 win over Totino Grace in the Class A state quarterfinals. (MHM Photo / Jeff Wegge)

SAINT PAUL— He had just watched his team fight back from a two-goal deficit more than halfway through regulation but St. Cloud Cathedral coach Eric Johnson wasn’t sweating out the result as he prepared his team for overtime. With his fourth-seeded Crusaders tied 3-3 with Totino Grace and an extra eight minutes on the clock, Johnson knew, win or lose, he really didn’t have much of a say in it.

“I’ve been doing this quite a while now and I don’t get that nervous in overtimes,” Johnson said. “The reality, for the most part, is it’s out of your hands and you’ve got one kid or a couple kids that need to make a play.”

A couple of his kids did make a play and earned the Crusaders a Class A state tournament semifinal date with No. 1 ranked East Grand Forks on Friday. Cathedral sophomore forward Erik Gadbois lunged for a rebound of a Matt Fritz shot and netted the game winner 5:21 into overtime to defeat fifth-seeded Totino-Grace 4-3.

“After Matt’s shot the goalie kind of went back into the net a little bit,” Gadbois said of Eagles goaltender Dominic Wippler who was lying face up in his crease after Fritz’s shot. “So I had a wide open upper shelf so I just flipped it up and got [the goal].”

The winning sequence was aided, in part, by a bench minor for too many men on the ice—the second such infraction of the game committed by the Eagles—leaving Totino-Grace shorthanded at the time.

“The unfortunate part about it is the puck happened to come right to the bench, which is the last place you want it when you’re on a [line] change,” Loahr said. “To their credit, Cathedral capitalized on it.”

In addition to his assist on the game winner, Fritz scored Cathedral’s first two goals while Logan Neu and William Hammer each had a pair of assists. Hammer’s two points added to his school-record-setting career point total which now sits at 174. After allowing three goals on 15 first-period shots, Crusaders’ goalie Zach Fritz stopped all 14 shots he faced the rest of the way for his comeback contribution.

“It felt like we turned the game a little bit in the second half,” Johnson said. “Both teams played their hearts out tonight and Totino has nothing to hang their heads on.”

“I thought we played pretty well that first period and the first half of the second. We were bottling them up, we’d get the puck deep and forechecked well,” Totino-Grace coach Mark Loahr said. “I think the T.V. timeouts hurt us a little bit. We had some real good momentum and all of a sudden there was kind of a lag and we’re waiting around and we kind of just lost a little bit that way.”

After Fritz got St. Cloud Cathedral on the board first 5:26 into the game, two Joey Brey goals sandwiched around a Blake Vagle tally just five minutes apart gave the Eagles a 3-1 lead after one.

Johnson said the Crusaders’ slow start was a function of his team acclimating themselves to the Xcel Energy Center environment.

“The first half of the game, really, we got worked,” Johnson said. “They were really good and caused some issues for us but our guys just sort of stayed even keel and we knew the next goal was huge.

“If it was 4-1 them, we were in trouble but we got it to 3-2 on a heck of a play by Logan [Neu] and Matt to get us some momentum and then from that point on we were fine.”

Near the 11-minute mark of the second period, Neu carried the puck into the left circle and lifted a pretty saucer pass over a sprawled out Eagle defender right to the stick of Fritz who directed it behind Wippler to pull Cathedral within one.

Still trailing in the final minute of the second, the Crusaders received a huge boost heading into the second intermission from an unlikely source. Third-line winger Leo Lommel redirected a shot by Hammer which bounced of Wippler right to Lommel who poked in the rebound for just his sixth of the season to tie the game 3-3 with just 14 seconds on the clock.

Johnson said he’s “super proud of our second and third line (Gadbois is on Cathedral’s second line). They’ve taken some jabs lately about we’re a one-line team and they came through big for us tonight.”

Johnson said the Crusaders will head back to St. Cloud on Thursday to practice and presumably step back from the unique distractions the tournament presents.

“It gets to be a long week for the kids and we’re only 60 miles away so we might as well take advantage of that and get home and sleep in our own beds.”