Wild’s season ends, but not before Staal’s 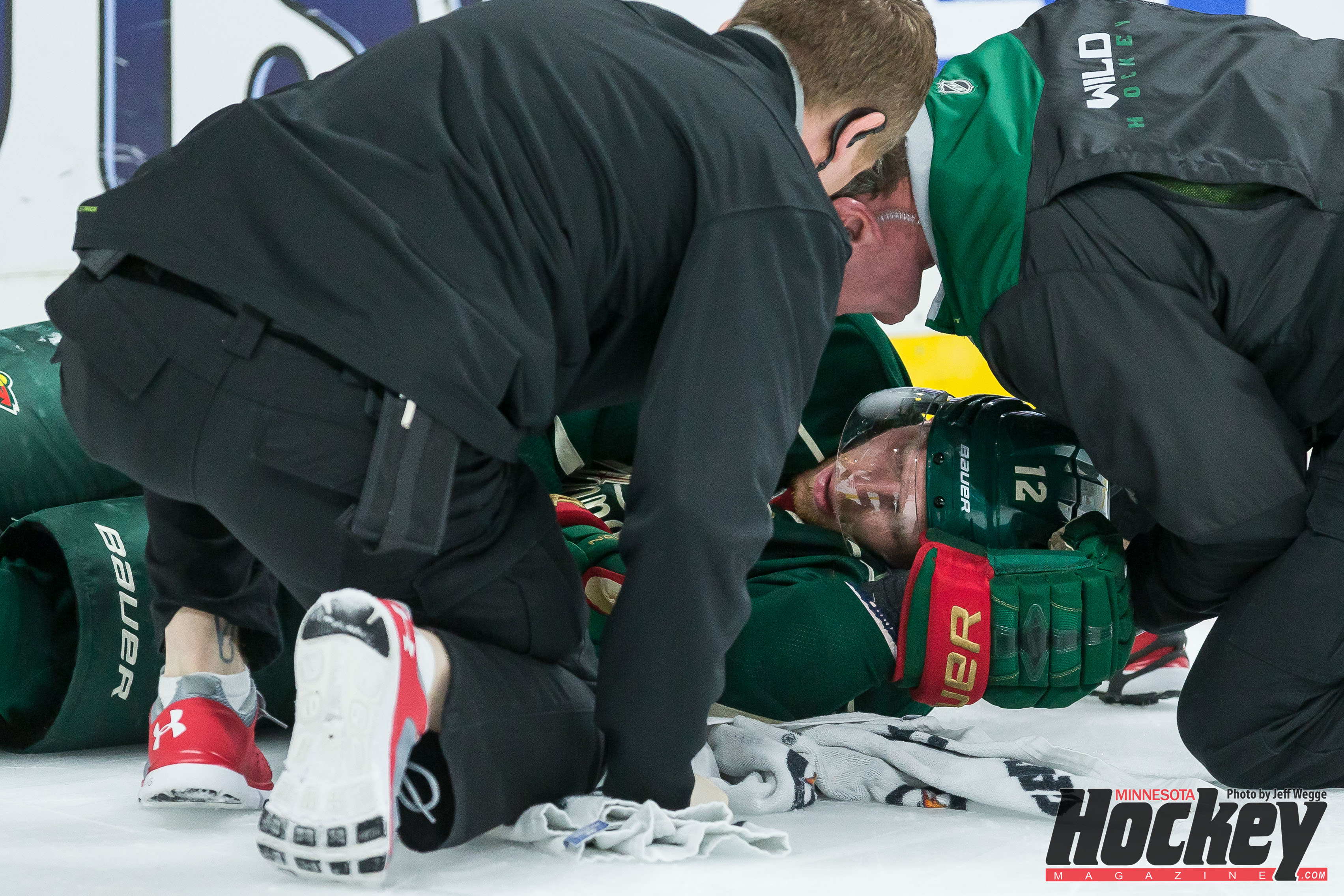 Wild center Eric Staal is tended to on the ice after he crashed head first into the boards in Saturday afternoon’s 4-3 season-ending loss to St. Louis at Xcel Energy Center. (MHM Photo / Jeff Wegge)

Wild’s season ends, but not before Staal’s

St. Paul — When Magnus Paajarvi scored for St. Louis at 9:42 of overtime to send Minnesota home for the season after a devastating 4-3 Game 5 loss, Wild center Eric Staal was not there to witness it. But Staal had already suffered far more than his teammates who made their way through the traditional post-series handshake line without him.

As disappointed Wild players congratulated foes who only moments before had crushed their Stanley Cup dreams, Staal was at nearby Regions Hospital under observation for a head injury he suffered with 6:07 remaining in the second period and the Wild trailing 2-1.

At last report, Staal was said to be alert and stable at Regions.

(UPDATE: Staal was released from the hospital Saturday evening.) 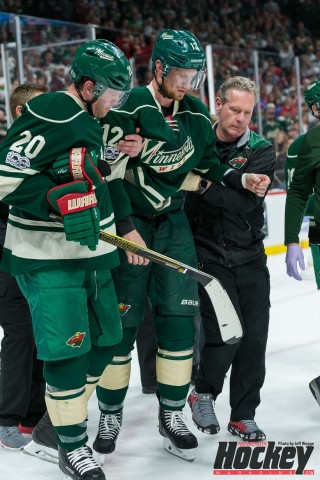 With both teams skating 4-on-4, Staal rushed the puck through the neutral zone and across the St. Louis blue line before splitting Blues’ defensemen Carl Gunnarsson and Colton Parayko and firing a shot from the top of the circles that was saved by goaltender Jake Allen .

As Staal skated past the crease, he tripped over the right skate of Allen who had extended his right pad in anticipation of a potential rebound attempt by Charlie Coyle. His balance lost, Staal fell head first into the end wall behind the St. Louis net.

“It was a scary play and when a guy goes down like that you get scared there for a bit and you get down,” Wild captain Mikko Koivu admitted.

A hush came over 19,228 at Xcel Energy Center as Staal lay motionless for several minutes with both glove hands cradling the top of his head. Ultimately, he was helped to his feet and assisted off the ice and down the tunnel to the team’s dressing room.

Minnesota pressed on with Erik Haula receiving extended minutes and the Wild stayed within a goal of the Blues until Paul Stastny made it 3-1 at 7:23 of the third period, seemingly putting the game and the series away for St. Louis. But without one of its primary leaders, Minnesota stormed back to tie the game on goals by Koivu and Jason Zucker in the final 10 minutes to send the game to overtime.

Koivu said it’s always hard to see a teammate go down the way Staal did.

“We really don’t know what’s going on,” Koivu said. “I think we were, obviously, relieved that he was able to get up and when you see that you know it’s usually nothing serious so I think it was easier to get on after that.”

After the game, Wild coach Bruce Boudreau said he had not heard any new information on Staal’s condition.

“We hadn’t played without him all year, so it was an adjustment,” Boudreau said. “But I thought Erik Haula came in and played center really well.”