Cullen’s return marked by near misses 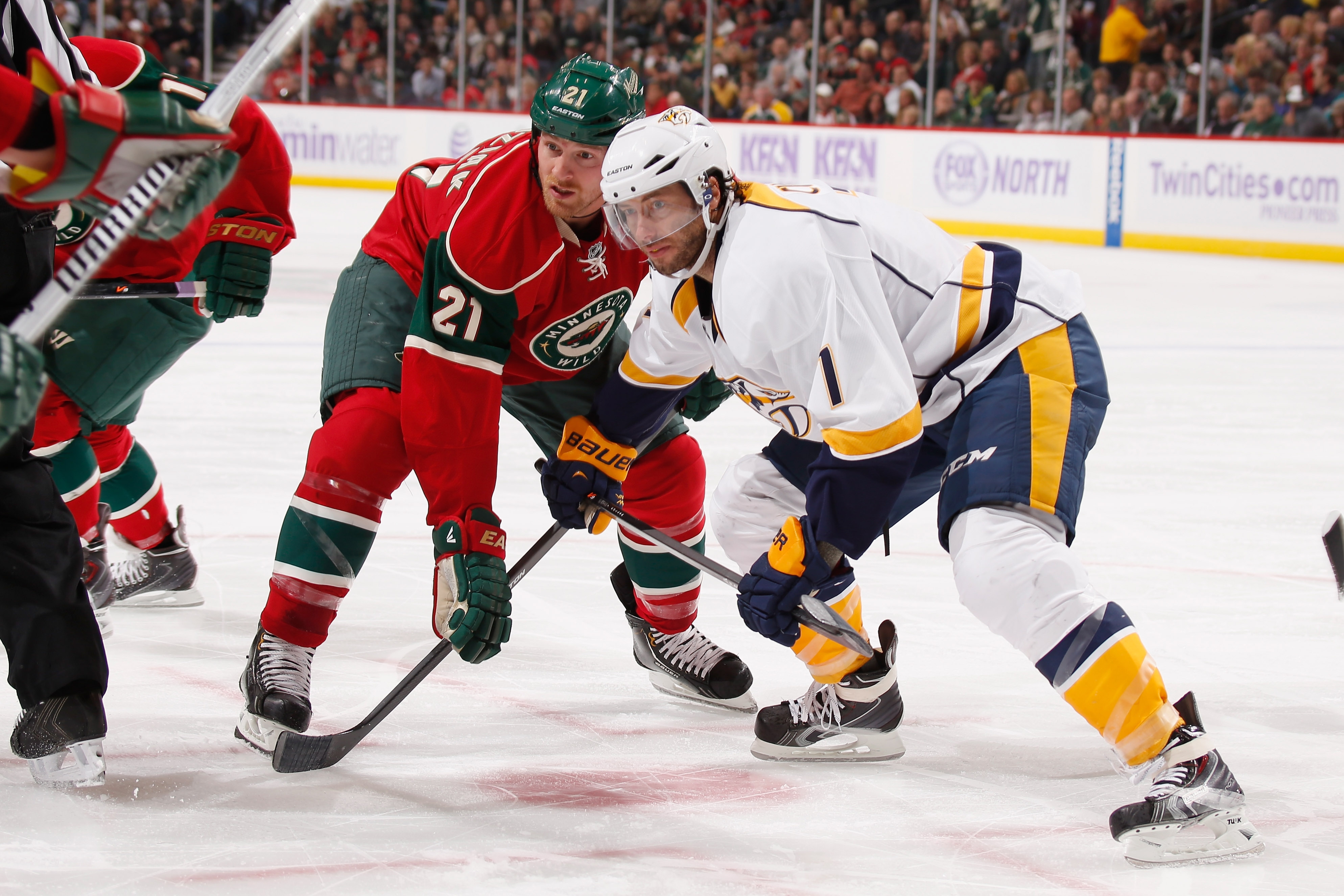 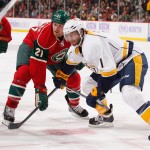 Jared Spurgeon not only preserved a Minnesota Wild lead—and ultimately a 2-0 win—over the Nashville Predators with 45 seconds to go on Tuesday night, but the Wild defenseman’s diving poke at a loose puck in the Minnesota goal crease kept the  17,651 on hand at Xcel Energy Center from a precarious position. Had the puck trickled in, Wild fans likely would have had to resist the urge to cheer for an opponent.

With Minnesota clinging to a one-goal lead and the Nashville net empty, former Wild fan-favorite Matt Cullen corralled a rebound and, from below the goal line, banked a shot off Minnesota goaltender Josh Harding’s left pad. As the puck wobbled its way toward the goal line, Spurgeon’s heroic effort denied a storybook finish to Cullen’s return to St. Paul.

“I kind of bounced it off [Harding] but I don’t know, it was awfully close, it sat on that goal line,” Cullen lamented. “Earlier in the game we missed a back-door play by inches and then they go down and score that first goal.”

On that play Cullen saw Predators defenseman Mattias Ekholm pinching in from the left point but his pass from the right circle misfired and the puck caromed off the wall to Zach Parise who led the rush resulting in Justin Fontaine’s second goal of his young NHL career at 18:53 of the second period. Jason Pominville would later add an empty-net goal.

Cullen said the game was frustrating and the Predators looked tired as they completed a three-game-in-four-nights road trip after stops in Montreal and Winnipeg.

“We didn’t come out with the same jump and spark that we’ve had as of late and that’s been the key to us being pretty successful,” Cullen said. “We didn’t have that tonight for whatever reason and [the Wild] played pretty well.”

Cullen, who spent the last three seasons as one of Minnesota’s most popular players while collecting 101 points (33-68–101) in 193 games, received what he termed a “classy” welcome home from Wild fans and his former team in the form of a tribute video played on the scoreboard prior to the game.

“They’ve always been nothing but classy to me,” Cullen said of the Wild. “I’ve got nothing but good things to say about the organization.”

A salary-cap casualty with the Wild, Cullen signed with Nashville as a free agent on July 5 and is the Predators’ most veteran skater with 1,082 regular-season games to his credit along with 566 points (204-362–566) in 16 NHL seasons.

The Virginia, Minn., native played his high school hockey at Moorhead where he was a three time All-State selection as well as a three-time member of the MSHSL Class AA State Tournament’s All-Tournament team from 1993-95. Cullen went on to star at St. Cloud State for two years, leading the Huskies in scoring both seasons as he amassed 86 points (27-59–86) in 75 games earning him All-WCHA second team honors in 1997.

The 1995 Minnesota Mr. Hockey Award finalist’s skills led the Anaheim Ducks to select him in the second round (No. 35 overall) in the 1996 NHL Entry Draft and, after one final season in St. Cloud, Cullen launched his NHL career in southern California where he played 472 games in five-plus seasons. Subsequent stops in Florida, Carolina—where he won a Stanley Cup in 2006—New York and Ottawa led up to his return to Minnesota when he signed a free-agent deal with the Wild in the summer of 2010.

In his 13 years with other clubs, Cullen has played in his home state on several occasions so the visitor’s dressing room is nothing new to him. But the 36-year-old father of three boys acknowledged this was no ordinary trip to Minnesota.

“It’s a lot different coming home now after being here for three years,” Cullen said. “It’s a special place for me, and it always will be, so it’s fun to come back here.”