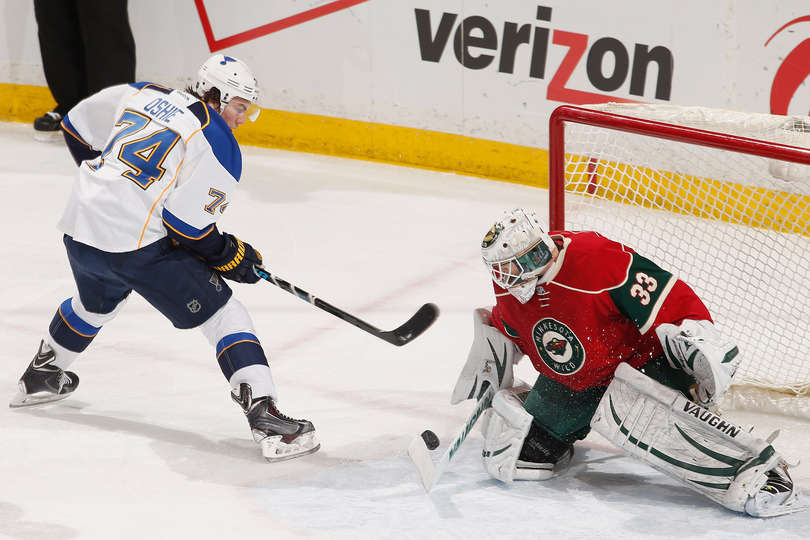 John Curry #33 of the Minnesota Wild makes a save against T.J. Oshie #74 of the St. Louis Blues during the game on April 10, 2014 at the Xcel Energy Center in St. Paul, Minnesota. (Photo by Bruce Kluckhohn/NHLI via Getty Images)

SAINT PAUL — The Minnesota Wild continued their hot streak as they prepare for the playoffs and  made a statement against the St. Louis Blues by earning a 4-2 victory at the Xcel Energy Center on Thursday night.  The win was the fourth in a row for the Wild who improved their record to 6-0-1 in their last seven games and it answered their recent dismal performance in St. Louis a few weeks back with a positive result and effort that could have an impact through the playoffs.

With Jared Spurgeon, Justin Fontaine, and Stephane Veilleux scratched from the lineup for the Wild, Minnesota turned to Shorewood native John Curry to man the pipes.  He became the fifth goaltender to play for the Wild this season.  Curry turned aside 43 shots, some from scrambles and one that was a terrific glove save from point blank range to give the Wild another high caliber goaltending performance.  Current number one goalie Ilya Bryzgalov was given the night off for much needed rest and to prepare for the post season.

The game was the first at the NHL level for Curry in four years who last played for the Pittsburgh Penguins in  the 2010 campaign and posted a 2-2 record.  Curry played for the Orlando Solar Bears of the ECHL and the Iowa Wild this season.  He had a stellar career for Boston University where he posted a 59-29-15 over his three seasons of full time play.

“I just tried to take it shot by shot,” Curry said of his game. “It was good to get a good start.  I sat all day, I’ll be honest with you, I was so nervous for this game, it’s such a big stage for me.  To have a good start and get those first few saves gets you into the rhythm and you just fall right into it.”

He was tasked with playing a Blues team that battered and bruised the Wild to the tune of a 5-1 loss in their last meeting on March 27th in St. Louis.  “I knew just based on video and seeing that team and knowing how good they are, they were going throw a lot of pucks at the net and get a lot of traffic to the net and that was certainly the case,” Curry said of the Blues. “Just thankful for the way the guys played, a lot of loose pucks bouncing around the net and a lot of good clears.”

Both teams exchanged goals through the second period yet the Wild carried a 3-2 lead into the third period.  Nino Niederreiter, Kyle Brodziak, and Matt Moulson scored for Wild who were out-shot 28-12 through two periods.  Brodziak added his second goal of the game and quieted the chirps that have been raining on him from the local fans and media alike regarding his lake of offensive production this year.

“It was a big win for us and we know that they are a very strong team and we know they could be a possible playoff opponent,” Niederreiter said.  “We had to make sure we played hard against them and make sure if that is the case it’s gong to be a tough one.”

The Blues not only lost the game, but they may have lost forward T.J. Oshie for what could be an unknown period of time who was drilled by Wild forward Mike Rupp.  The blow from Rupp was whistled as a major and a game misconduct.   Not only did the Wild have to kill a five minute major, they found themselves starting it with a five-on-three as Marco Scandella also received a minor penalty for high sticking.

The Blues Kevin Shattenkirk scored to even the game at two with the five on three, but Brodziak reclaimed the lead for the Wild at 3-2  just 1:19 later on a short handed effort.  “It was a big kill,” Brodziak said. “Especially after they got a goal on the five on three, we were able to respond like that was a big point of the game.”

The game continued the upward trend of the Wild who have been playing a solid defensive structured game and were able to continue their success with new faces in the line up.  Newly signed defenseman Christian Folin from UMass Lowell made his NHL debut and assisted on Brodziak’s second goal of the game that gave Minnesota the final margin at 4-2.

“I was very thankful to get the opportunity no matter how it went,” Curry said of the start.  “Just based on my career you don’t get many of these so it’s good to have success and to play well when you get the chance.”

The Wild were thankful that for the fifth time this season a different goalie has taken the crease and delivered a jaw dropping performance.  The playoffs are less than a week away and to be trending upward is a place any team would like to be.  Standing up to the dominance the Blues exerted over the Wild in recent meetings, 6-0-3 against Minnesota prior to Thursday night,  will take Minnesota a long way in their effort to move out of the first round and deeper into the playoffs regardless who their first round opponent is.