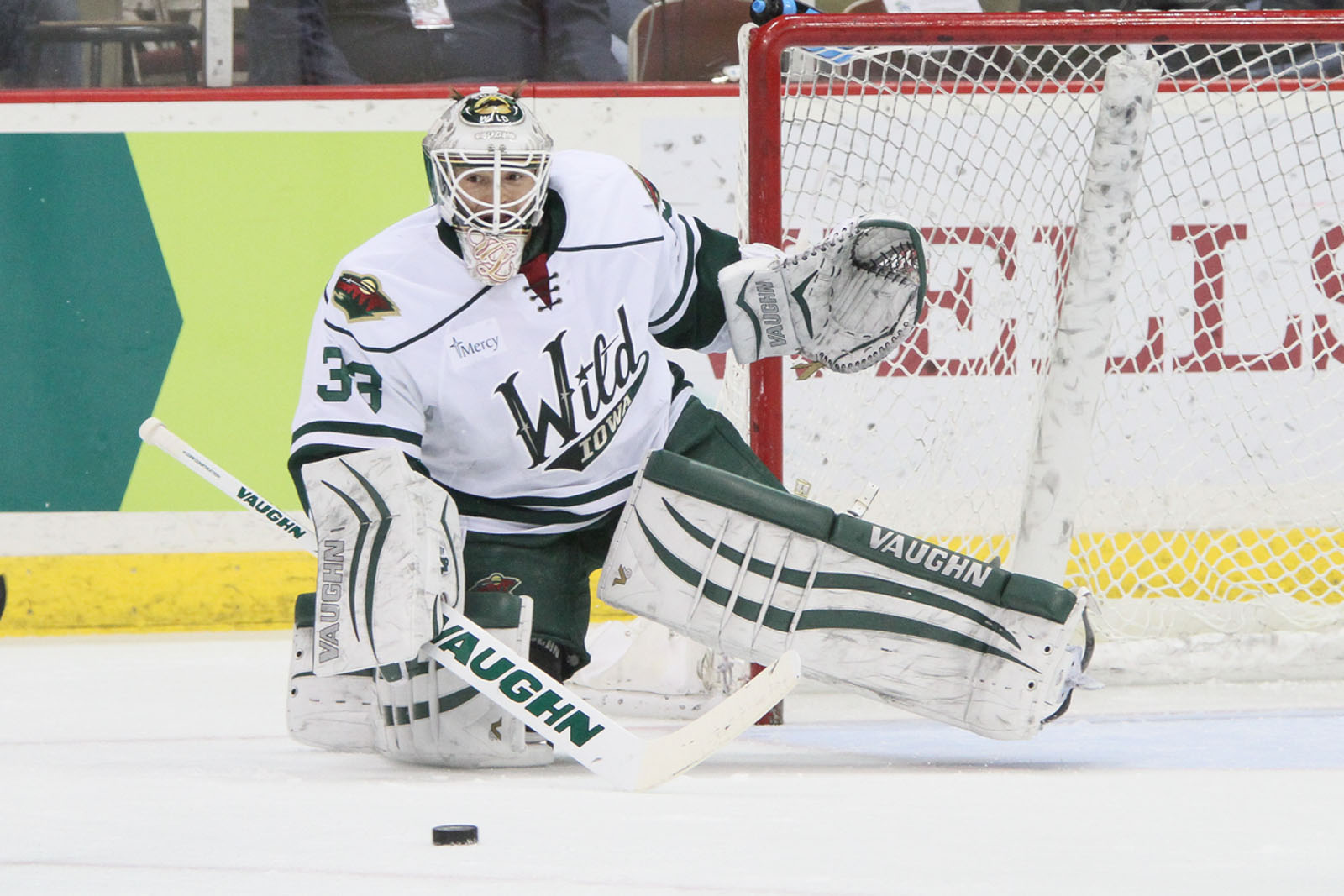 John Curry makes a save against the Milwaukee Admirals at Wells Fargo Arena on Nov. 23. He stopped 33-of-34 shots in a 2-1 shootout win for the Wild. (Photo: Ted Sandeen / Iowa Wild)

DES MOINES – Iowa Wild goaltender John Curry has struggled early this season. He was 0-4 in just five appearances with a .885 save percentage going into Sunday’s game against the Milwaukee Admirals, but the struggle didn’t continue when he returned from his recent assignment to the Quad City Mallards of the ECHL.

After playing in one game with the Mallards he returned to Iowa in a big way for the game on Sunday and stopped 33-of-34 shots against the Admirals and denied all three shooters in the shootout to help the Wild to a 2-1 win.

“It’s just good to get it (first win) out of the way,” Curry said after the game. “I’ve been thinking about it a lot. When you start the year off individually 0-4 you start thinking about things, and I can tell you I didn’t feel like I ever lost my game. I can’t tell you I’ve played my best but it was just a tough start.”

Curry thinks that playing for the Mallards last Friday night helped him going into the game on Sunday.

“I want to be at this level, but I hadn’t played in a couple of weeks and it’s always good to get the 60 minutes under your belt, more for endurance and just getting back in shape than anything else,” Curry said. “Honestly, I had a good time. It was a fun win and a fun group of guys down there.”

On Nov. 21 Curry got the start for the Mallards as they took on the Rapid City Rush at the iWireless Center in Moline, Ill. and turned aside 27-of-29 shots as the Mallards went on to win 4-2 behind four third-period goals.

Curry has now appeared in six games, starting five for the Wild while Johan Gustafsson has played in 13 games and has a 4-8-1 record with one shutout this year and a .894 save percentage.

The win was the Wild’s first ever win against Milwaukee in Des Moines as the Admirals went into the game with a 10-0 record all time against the Wild at Wells Fargo Arena.

In the shootout on Sunday, after a Zack Phillips goal put the Wild up 1-0, Jordan Schroeder had a chance to end it with a goal but was denied and the pressure shifted to Curry who made the big save and secured the win for the Wild.

“He wanted the game and he proved it there,” Iowa coach John Torchetti said.

“He was really big for us … I know he can be a difference in our team moving forward and with that tandem we’re going to be a tough team to beat.”

Since Torchetti took over as head coach on Nov. 11 the Wild are 3-3. They won their first two games, a 3-2 win at Milwaukee and a 4-2 win over Oklahoma City at home before dropping the next three to Oklahoma City, Rockford and Chicago and then winning on Sunday.

Tyler Graovac is the Wild’s scoring leader with 15 points (6 goals, 9 assists). His six goals tie him for the team lead with Marc Hagel.

The Wild will now hit the road for five-straight games starting with the Rockford Ice Hogs on Wednesday. On Saturday and Sunday the Wild will be in the state of Texas for a game against the defending Calder Cup Champion Texas Stars on Saturday and the San Antonio Rampage on Sunday.

After that they will play in Charlotte against the Checkers on Dec. 6 and 8 before returning to Des Moines on Dec. 11 against the Rampage.

On Nov. 19 the Minnesota Wild assigned goaltender Josh Harding to the Iowa Wild. He was Gustafsson’s backup in the Wild’s games at Rockford and at Chicago on Nov. 21 and 22 but did not see any playing time. He was not in uniform on Sunday.

Defenseman Justin Falk and Schroeder returned to Iowa on Nov. 14 after a brief stint with the Minnesota Wild and on Nov. 20, forward Ryan Walters was assigned to the Alaska Aces of the ECHL.