With depth being tested, Wild can even less afford to stray from who they are 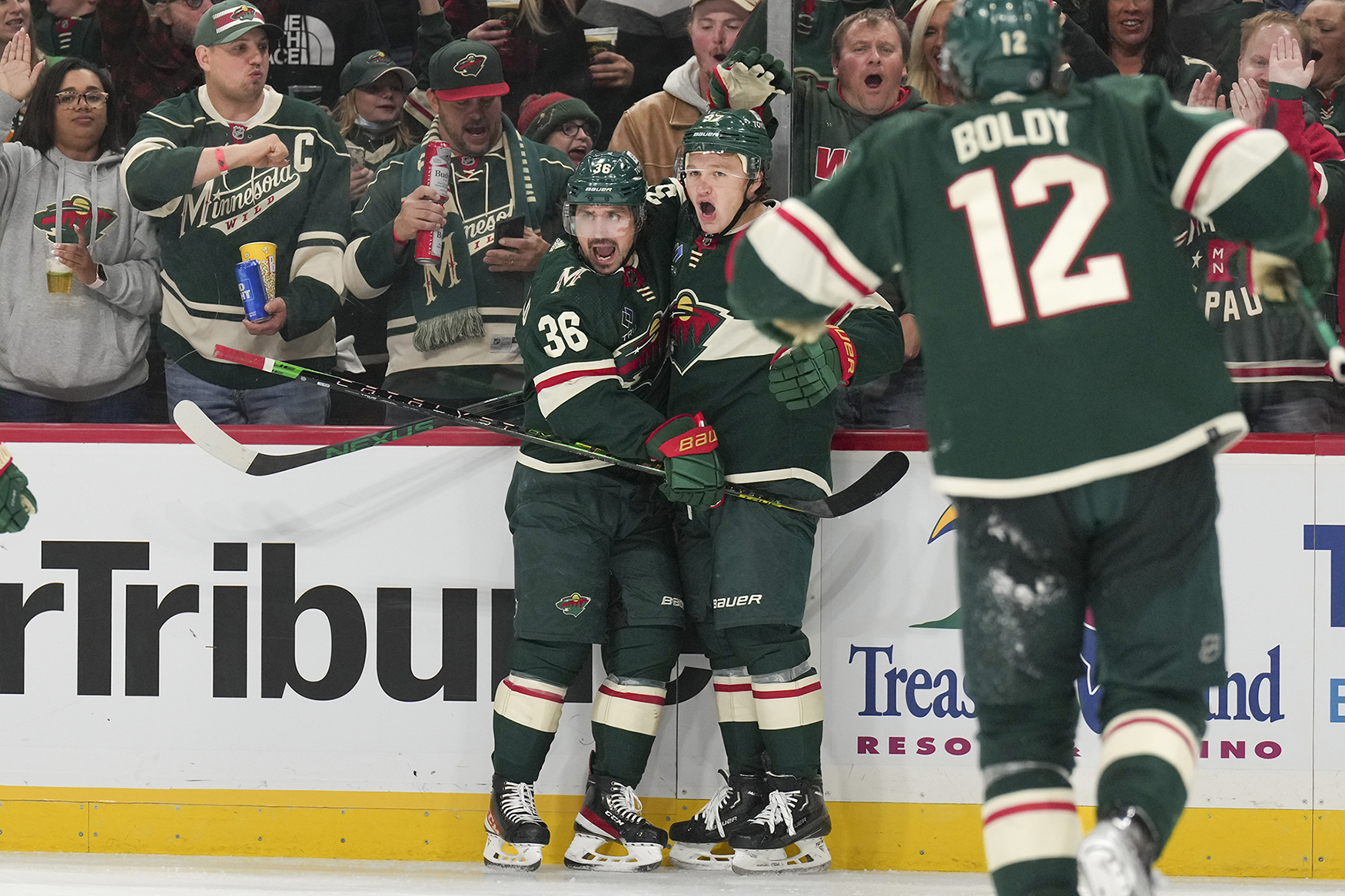 The Wild had continued to distance themselves from an 0-3 start with a 4-1 victory over visiting Montreal on Tuesday night that gave Minnesota a 5-1-1 record in its past seven and continued their early-season climb from the bottom of the Central Division.

But not everything was as coach Dean Evason had hoped. Winger Brandon Duhaime had joined a list of injured forwards that already included Marcus Foligno, Jordan Greenway and Ryan Hartman. These are four of the Wild’s top sandpaper players and all were now out — replaced by the likes of Mason Shaw, Steve Fogarty and others whose ice time had gone beyond the expected.

So how much of a problem had this become?

“It’s not,” Evason said. “It’s exciting because you get to put people in opportunities to be successful. They all want to play. So you get an opportunity to place a guy in a spot that he wants, he’s hungry for. Clearly we don’t want injuries, we’d like to have everybody healthy. But it happens, it’s a physical game, so it’s going to happen. It’s exciting for us as an organization to see the progress, the development and the depth of our organization.”

The expiration date on Evason’s excitement might have come two days later as the Seattle Kraken shut out the lethargic Wild, 4-0, at Xcel Energy Center. The good news was the Wild had a four-day break to get players rested and healthy for a three-game West Coast trip that begins Tuesday against the Kings.

That c0uld be enough time to get Greenway, Foligno and Duhaime back. But the return of those three won’t erase the fact that if the Wild are going to come close to repeating the franchise-high 113 points they posted last season this team is going to have to make some decisions about how it wants to play. 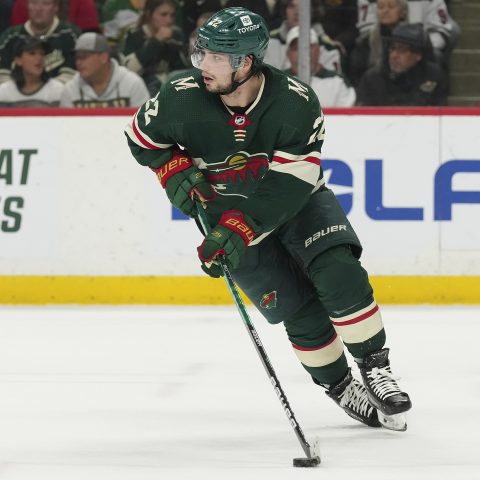 Kevin Fiala is not only gone but needs to be forgotten as the Wild must find other ways to replace his production. (MHM Photo / Rick Olson)

The salary-cap related offseason trade of winger Kevin Fiala to the Kings cost the Wild a dynamic goal scorer. Fiala, who had three goals and 10 assists in 13 games entering the weekend, wasn’t in the superstar class of Kirill Kaprizov but he was a star, as evidenced when he went on a heater in which he was nearly unstoppable.

During a 33-game stretch late last season, Fiala had 19 goals and 28 assists and was a plus-20. That was playing on a second line with center Frederick Gaudreau and winger Matt Boldy. The Wild’s first-line of Hartman between Kaprizov and Mats Zuccarello made shutting down the Wild a difficult task, at least in the regular season.

The hope was that Fiala’s production would result in other players picking up the slack in the goal scoring department. That was an ideal thought but not realistic. Boldy is off to a strong start with six goals and four assists but he isn’t going to be able to replace Fiala’s goal scoring by himself.

The Wild’s reality is this: This team isn’t nearly as deep in the scoring department. The Kraken provided a good blueprint on how to beat the Wild by playing a disciplined game and focusing on slowing Kaprizov and Zuccarello, who were no longer being centered by the slumping Hartman even before he got hurt. Hartman, who was injured in a fight against the Blackhawks on Sunday, had a career-high 34 goals and 65 points in 2021-22, stats he is unlikely to repeat.

Gaudreau had moved into the center spot on the Wild’s first line — a clear indication of the quality depth lacking at that position on the roster — but he was taken off in favor of Boldy in the third period. What Evason is going to have to hammer home with this team, no matter what line combinations he uses, and no matter who returns from injury, is that there is only one way to play. 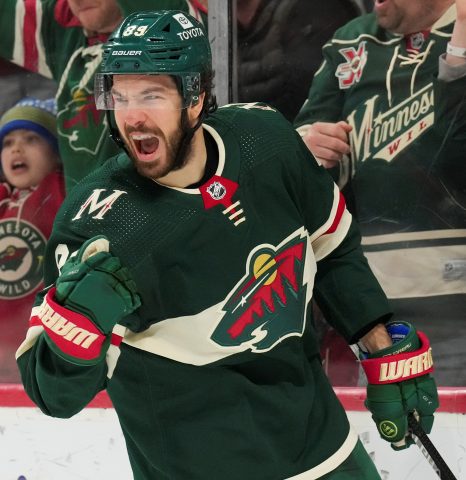 Players like Freddy Gaudreau can’t let themselves get caught up in “keeping up with the Kaprizovs.” (MHM Photo / Rick Olson)

As the Wild struggled to open the season, there was talk of the team trying to find its identity and not yet knowing what it is. That’s nonsense. The identity of this team must be hard work by the many players who aren’t talented or skilled enough to get away with anything else. Kaprizov, who had 47 goals and 108 points last season and already has eight goals and 13 points this year, remains one of the NHL’s best and Zuccarello is an elite-playmaking winger.

But the majority of this roster is made up of players who should never fall into the trap of thinking they can play Kaprivoz or Zuccarello’s game. Gaudreau, a player in whom Evason has great faith, has gotten too cute at times when playing on the first line. The scoreless first period on Thursday featured only four shots by the Wild and Kraken goalie Martin Jones got the 22-save shutout despite the fact he gave up numerous juicy rebounds that the Wild failed to pounce on by driving to the net.

Even Kaprizov and Zuccarello got caught in the trap of trying to be too flashy in the Wild’s 2-1 loss last Saturday in Detroit. Afterward, Evason lamented that his players had gone away from their identity.

“We haven’t done the spin-o-ramas, we haven’t done the throwing pucks from behind the net (in a 3-0-1 stretch that followed the 0-3 start),” Evason said. “We’ve got to get it to the top, and we run our routes in the offensive zone and cycles, and we get opportunities from that. We don’t get opportunities by being a cute hockey team. We’re grit with skill. And we thought that we were just skilled tonight.”

The Wild might have been able to get away with this approach, at least for long stretches, when Fiala was around. But his departure has altered this team’s makeup and the sooner everyone realizes this the better.