Dawn of a new era 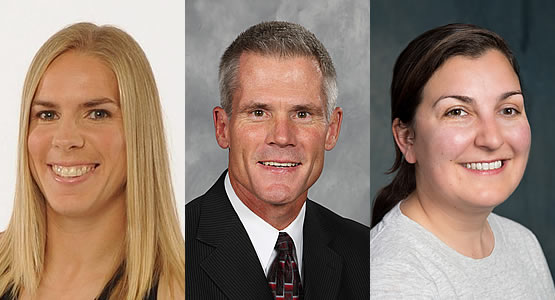 EDINA, Minn. – A year ago this month, John Harrington was behind the bench, coaching  a team that included Jarome Iginla, Alex Tanguay and Nathan MacKinnon as Patrick Roy looked on from the stands.

Last week, Harrington was about to lace on his skates for his first practice and was aware his team included just one veteran, a senior winger named Katie Johnson. It is quite a transition from coaching in a Colorado Avalanche preseason intrasquad game to running practice at Mankato’s All Seasons Arena.

“I am just as excited,’’ said Harrington, a scout with the Avalanche for the last four years and now a rookie women’s hockey coach at Minnesota State. “Whole new experience.  New players.  It is a chance to teach and that is what I like.”

What a difference a year makes.

Just ask Jenny Potter. Last season she was the head coach at Division III Trinity College in Connecticut and still good enough to play, as her all-American resume at Minnesota and Minnesota Duluth and her medals from the U.S. Olympic team attests. Her hockey skills were reinforced last winter when she played occasionally for the Boston Blades of the Canadian Women’s Hockey League. Last week, Potter was blowing the coaching whistle as the new leader of the women’s program at Ohio State.

Maura Crowell shares Potter’s excitement about her new position, head coach of the tradition-rich Minnesota Duluth women’s program, which has won five national championships. Two years ago, Crowell coached Harvard to an NCAA berth when Katey Stone was leading the U.S. Olympic team. Last season, Crowell returned to her position as Stone’s top assistant, a person responsible for recruiting many of the Crimson players who reached the NCAA finals before losing to Minnesota at Ridder Arena in March. A month later, Crowell took the next step in her career, moving from the Ivy League to the Twin Ports in northern Minnesota.

”Being a head coach in the WCHA is an unbelievable opportunity,” said Crowell. “The WCHA is the best league in country. I know they have had a ton of success here (in Duluth). The challenge is to bring us back to national prominence and I know we have the resources here to get the job done.”

While three programs are watching new coaches introduce themselves to their players and implementing new systems, the WCHA, which has 15 national championship trophies in its 16 years of existence, has also undergone a renovation with five programs changing coaches in the last 18 months.

“The one thing that has been consistent is each team every year is getting better and better,” Wisconsin’s Mark Johnson, the dean of WCHA coaches, said during the league’s preseason conference call. “It seems like our fan support is increasing. Our product has gotten stronger. That’s a testament to each of the eight athletic departments that have committed to helping women’s hockey grow.”

While there may be a lot of new coaches, there is still a look of familiarity to the WCHA season, which opens this Friday (Sept. 25).

Defending WCHA and national champion Minnesota is once again the preseason coaches’ pick to win the regular season title. Wisconsin, which won the WCHA playoff championship at the Final Face-Off last season, is picked to finish second and North Dakota is picked for third. Not coincidentally, those teams all have veteran coaches – Johnson, starting his 13th season at Wisconsin, along with North Dakota’s Brian Idalski and Minnesota’s Brad Frost, who each are starting their ninth season as head coaches.

“I wasn’t given the keys to a clunker, there were a lot of good players,” said Scanlan about the Beavers’ success last year and praising assistant coaches Amber Fryklund and Shane Veenker, who were holdovers from  former coach Steve Sertich’s staff.

Scanlan, a successful head coach at East Grand Forks High School, and St. Cloud State’s Eric Rud, who was a men’s assistant at St. Cloud State and Colorado College, were the new kids on the WCHA coaching block last year at this time.

Rud, like Harrington, lacked experience coaching women prior to taking over in St. Cloud. His best advice for Harrington?  Keep an open mind. The culture in women’s hockey is a tad different from what Harrington saw as a successful head coach at St. John’s University, a Division III program, and coaching pro teams in Europe before taking a scouting job with Colorado.

Let Rud explain: “We were up a goal in a game early in the season and I walked by the locker room and the tunes are blasting and the girls are having a great time,” Rud said. “To be honest, at first, I panicked. I said, ‘What on earth is going on in here,’ and (SCSU assistant coach and former Olympian and UW player) Jinelle Siergiej pulled me aside and told me, ‘This is what we do. We do this in the Olympics. We do this at Wisconsin. This is our deal.’ It wasn’t that they were screwing around. They were enjoying the process and excited. I enjoy that part of the women’s game.”

Harrington, who like Johnson played on the gold-medal winning 1980 U.S. Men’s Olympic team, said he is energized by the new job.

“As you get older, you look back on your career and I have been fortunate to do a lot of things,” said Harrington, who was also a men’s assistant coach in the WCHA at St. Cloud State and Denver, and coached two pro teams in Switzerland after leaving St. John’s. “A couple years ago, when Goose (Jeff Giesen, now Harrington’s assistant coach) was at St. Cloud, he let me work with his team at practice a few times. It energized me and made me realize I enjoy working with these young women who want to learn as much as they could.

“It whet my appetite to get back into coaching and then this opportunity arose. Mike Hastings (the Mavericks’ men’s coach)  is a good friend of mine and when he told me about the plans for the women’s team moving downtown, it made the job even more appealing.  I think when we start practicing and playing at the (remodeled) Verizon Wireless Center, it will give the program another jolt of excitement.”

Harrington knows his team has only three juniors to go with one senior. He knows the league is tough and four other programs have plans to re-energize their programs and compete with the three holdover coaches who have elite programs.

“We’re certainly going to try to win. I think it’s going to be important for us to have an understanding of success, and that might not include wins and losses,” Harrington said. “We can’t always look in those columns. It’s going to be a process here to develop. I think what I enjoy doing is trying to develop players and to teach.”

“I am acquainting myself with the players, and they are with me and their new teammates. It’s like I said on the conference call, I suggested to the players they might want to put tape on their helmets with their name on it so I know who is who.”

It may be advice that a lot of coaches and fans can employ as the WCHA – with a new look but arguably better than ever – starts another season.