The Dawn of Hockeytown 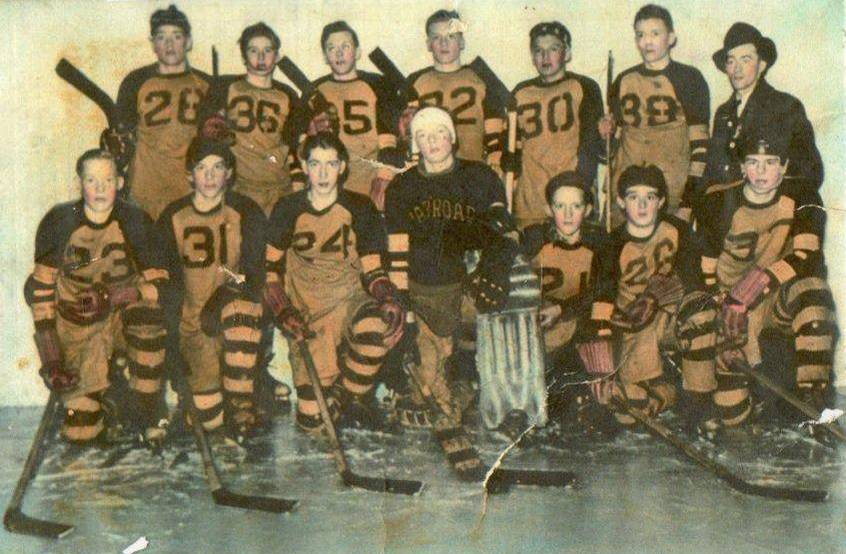 When Kenora, Ont., won the Stanley Cup in 1907, it may have launched hockey in northern Minnesota. Warroad, Minn., and Kenora are at opposite ends of Lake of the Woods, one of the best fisheries in North America.

Warroad, the only American port on Lake of the Woods, is located at the southwest corner of the lake while Kenora is 90 miles northeast of Warroad by water through a maze of 14,600 islands.

The Warroad area was rich with timber and fish and those industries started shipping goods to eastern markets in the late 1890’s. By the early 1900’s several fisheries and sawmills sprang up all around the lake. They hauled the fish and timber to Kenora until the Canadian Railroad came around the southern end of the lake to Warroad.

They say that one of the first questions young George Marvin — eventual founder of Marvin Lumber & Cedar Company — asked when he stepped off the train in Warroad from Winnipeg was, “Does anyone play hockey here?” He may have been one of the few that knew something about hockey. It was about the time when hockey started to develop as a winter sport. 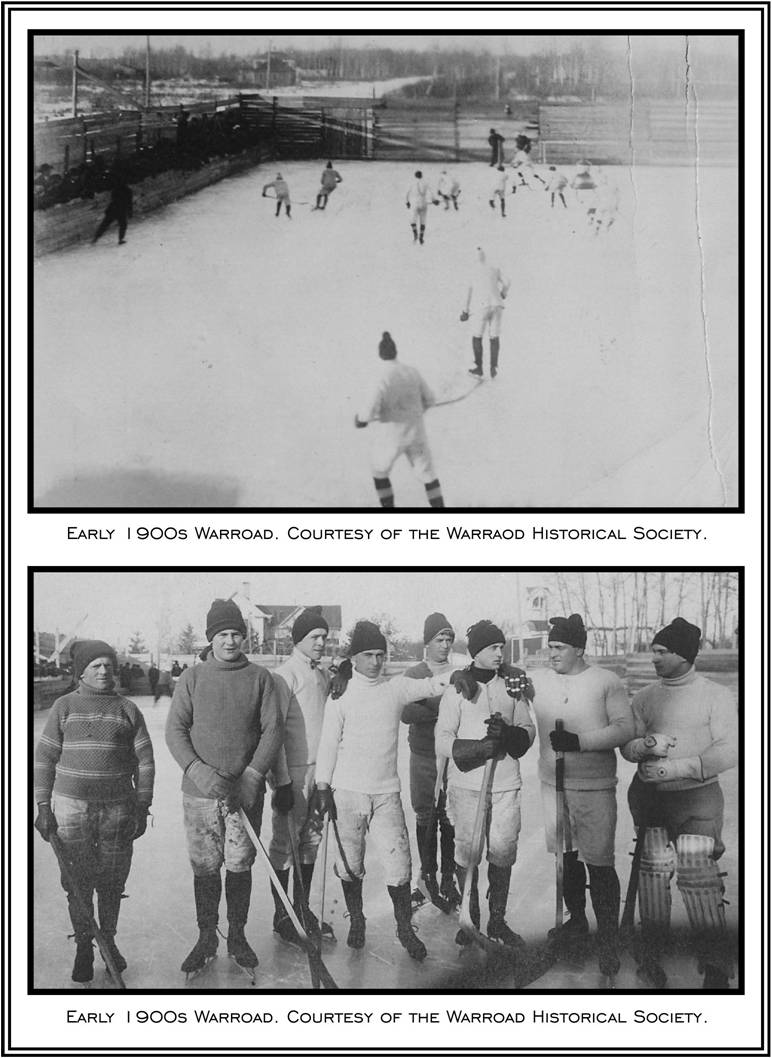 Baseball was popular in the summers but people needed something to do in the winters with more time on their hands so they took up ice skating and hockey. They skated on the Warroad River and on an outdoor rink with a warming house they built in town near the Warroad School.

With other Canadians moving into the Warroad area, people like pharmacist, and former Winnipegger, Ed Holland played, encouraged and supported hockey. Soon after, other area communities started making outdoor rinks and communities were able to play games against each other and the rivalries began.

Above is a picture of the early Warroad team and them playing outdoors on the Warroad River. Notice the rink with the high planks around the rink to prevent wind and the pucks going over the boards.

The Minnesota State High School Tournament didn’t start until after World War II but Warroad had been playing hockey in hockey leagues decades before. Other communities like Thief River Falls, Crookston, Grand Forks, Roseau and many other Canadian communities competed in leagues and tournaments during that time. 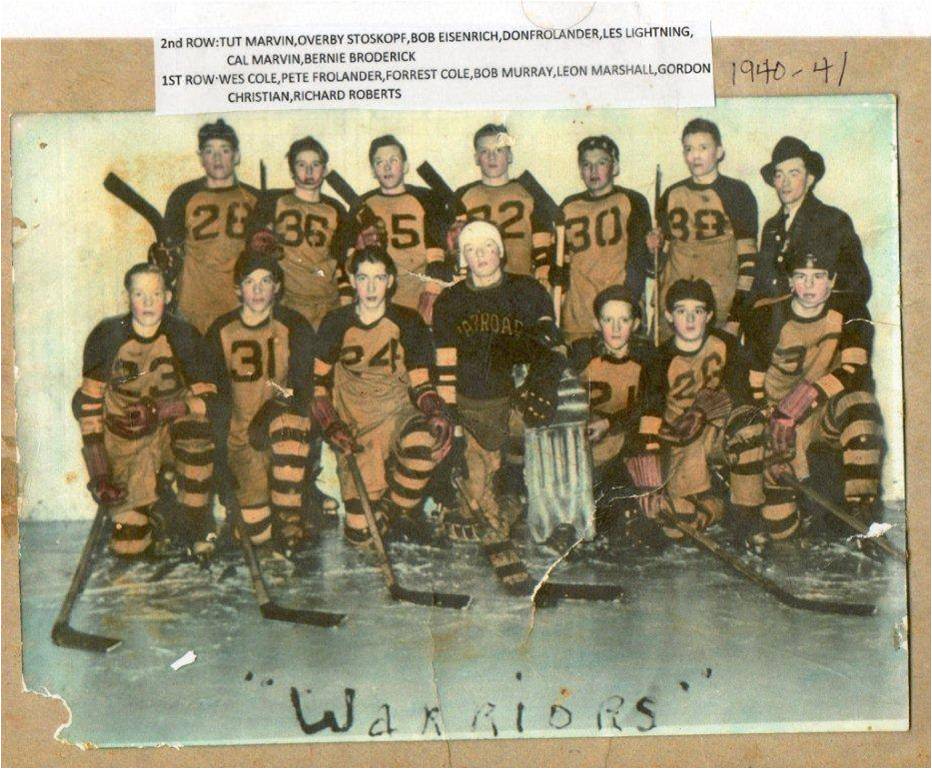 Pictured above is the 1940 Warroad High School team. It was the first year the school came out with a High School Annual. All games were played outside near the school. Fans stood on snow banks around the rink and, when they got cold, went in and warmed up along with the players in the outdoor warming hut that had a wood stove. The Warroad Memorial Arena was not built until 1948.

When Warroad played in the Minnesota State High School Hockey Tournament in 1948, they drove to Minneapolis/St. Paul with parents or whoever had a car, riding in several different cars which took all day. Most kids were in awe of the big city as they came from poor families and had never been to a city before.

Aside from the high school team, Warroad had a senior men’s team that participated in leagues in the area. Some players were able to play on both teams if they wanted, prior to changes in the Minnesota high school rules.

Later, Cal Marvin, Ginny Christian, Sam Gibbons, Bob May among others from Warroad attended the University of North Dakota. North Dakota didn’t have a team so Cal and the rest of the players went to the Board of Regents and requested that they allow the boys to represent the University and play a few other college teams.

The team was well represented with talent and won most of their games. The university started to support the team and the rest is history. Richard Roberts who is picture above with the 1940 Warroad team attended and played hockey for the University of Minnesota; he was a captain during his time as a Gopher.

After college, Cal Marvin returned to Warroad and took over the Warroad Town Team from Ed Holland. Cal was instrumental in fundraising to build the first Warroad Memorial indoor arena. It was built with the help of volunteers and was operational in 1948. The rink was covered and later they added locker rooms. It had natural ice until the late 1970’s when they added artificial ice and a Zamboni. We skated in the old Warroad Gardens from December until the warm up and ice went out in March.

Henry Boucha is a retired Native American professional hockey player who played six seasons in the National Hockey League for the Detroit Red Wings, Minnesota North Stars, Kansas City Scouts and Colorado Rockies. Boucha led his Warroad to the 1969 state tournament before playing three seasons with the U.S. National Team, winning an Olympic silver medal in 1972. Boucha’s promising career was tragically cut short by an eye injury that forced him to hang up his skates at the age of 26. Inducted into the United States Hockey Hall of Fame in 1995, Boucha founded a program in 1995 to offer economically disadvantaged Ojibwe youth the opportunity to play ice hockey. Though mostly remembered for his on-ice abilities, Boucha’s greatest assists can be found off the ice.