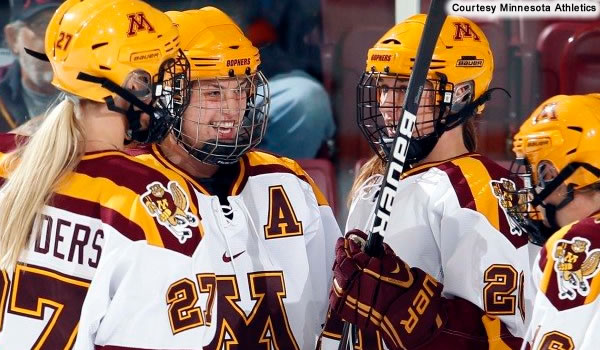 Even as I write that number, everything in my consciousness tells me not to.

See, I am superstitious and I fully understand the importance of never pointing out things like this.

However, the streak that Gopher women’s hockey team is on is just too incredible to ignore and I am in the business of writing about things that you find interesting.

57 straight games over three seasons without a loss.

A streak that is now one better than Joe DiMaggio’s famed hit streak in baseball that has stood for 71 years. Imagine that for a moment. 57 teams on 57 nights have taken a run at the Gophers and none have been able to win. Can you imagine going to your place of work for 57 consecutive days and always being better than everyone else? I know, me neither.

But for the better part of two seasons and now stretching to a third, Brad Frost and the Gopher women have done that. Yes, they’ve had close games. They’ve had to go late into the third period more than once to be victorious – but in the end they always do.

Throughout this streak there have been a lot of changes. Rosters have featured the best forward in college hockey, arguably the best goalie of women’s college hockey’s modern era of and, of course, opponents change every year.  But as players change new ones come along to fill the spot and the Gopher women continue to win.

How does a team keep winning? It comes down to coaching and recruiting and Brad Frost and his staff are great at both. While gathering the best talent the country has to offer to the nation’s best program may not seem hard, coaching them to win every single game is an art form and Frost is Pablo Picasso.

He took over a very good program from Laura Halldorson, who also has two NCAA championships on her Gopher coaching resume. Although he had been an assistant for years, Frost was a rookie head coach having never led a program at the Division I level. However, it didn’t take long to prove he could do the job; he won his first WCHA title in his second year as head coach.

That seems like small potatoes in comparison to what he’s done since. In total, he’s amassed three WCHA regular season titles, two WCHA titles, two NCAA titles and a win streak that continues to captivate Minnesota.

Full disclosure: Brad Frost is a friend and I’m proud to say that. He’s not only a great coach and great to the media, more importantly he is a dedicated father and husband. When we talked at the beginning of the year he once again downplayed the gravity of what last year’s team had done. He insists that last year’s merits mean nothing when the new season starts and clearly his team has bought in once again.

Even with losing superstar goalie Noora Raty to graduation and last year’s Patty Kazmaier award winner, Amanda Kessel, to the Olympics, this team has picked up right where it left off. They are currently ranked No. 1 in the nation and have begun the season 8-0. Heck they even shut out two opponents in preseason exhibition games.

The team has captivated even the most relaxed of hockey fans. It’s quite routine for me to be asked, “Did the Gopher women’s hockey team win tonight?” without the person knowing or even caring whom the opponent is. People just want to know if the streak is still alive. You see, everyone loves a good story and right now the Gophers are one of the most interesting around.

In that same conversation with Frost before the season he told me something that his players all echoed: at some point in the future, they know they are going to lose. They don’t know when or how, but the winning can’t last forever. While logically I know this is true, there is a part of me that continues to wonder; could it really happen again? Could the Gophers pull off another flawless season like last year?

I remember asking myself that same question so many times last year. Always thinking that at some point they would have a bad night and lose a game. At times they came close, but it never happened.

Scientifically, there is no basis to the thought that simply by writing this I am increasing the chances that they will lose a game, but I am superstitious. Unfortunately I have deadlines to meet and a website I’d like you to visit. So do me a favor, having read this article, don’t talk about the improbable 57-game win streak to anyone else; maybe we can all do our part to keep it alive.