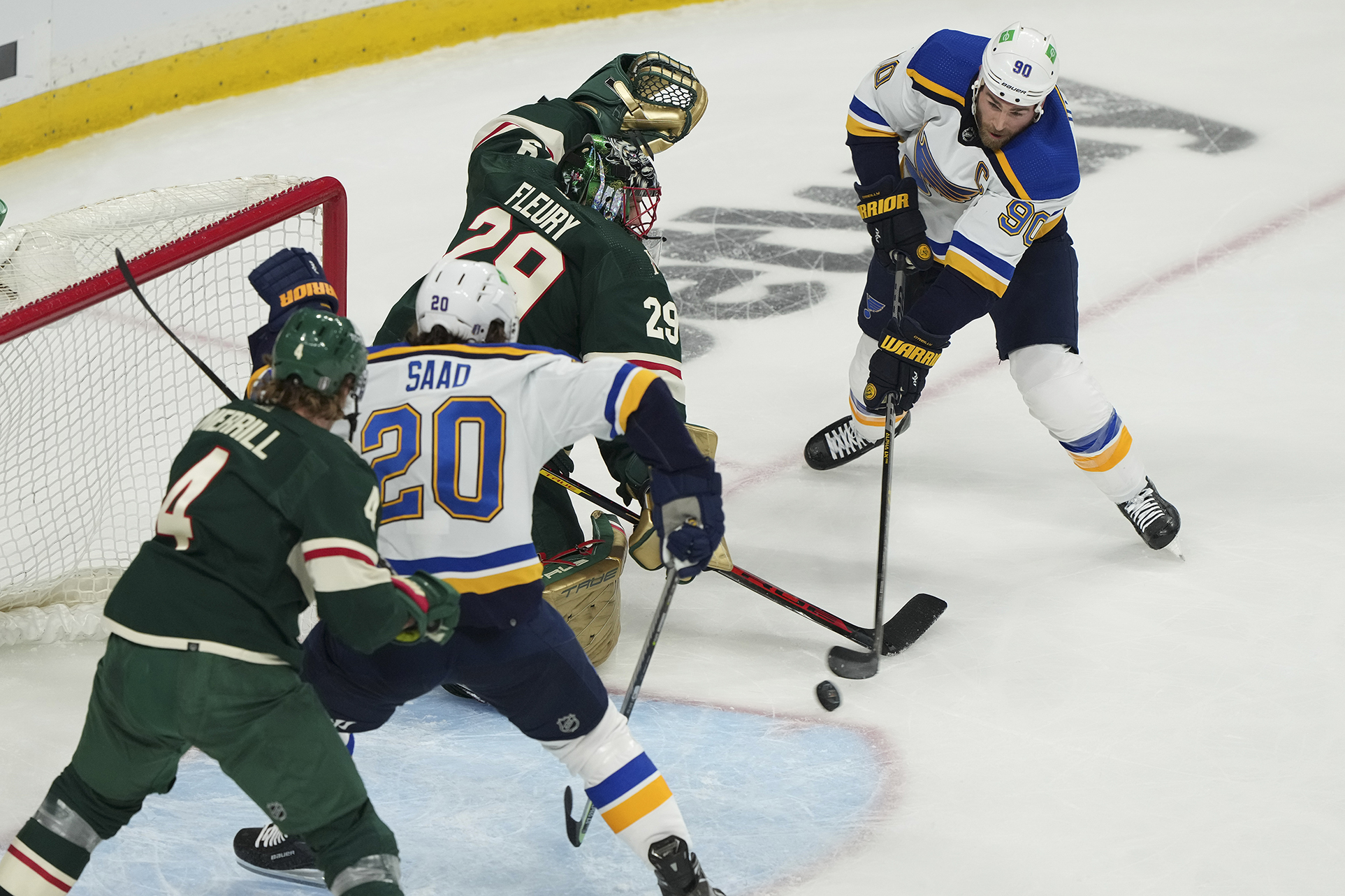 St. Louis captain Ryan O'Reilly scores the first of his five goals late in the first period of Game 1 of the Blues' six-game Stanley Cup first round series win over the Minnesota Wild on May 2, 2022 at Xcel Energy Center. (MHM Photo / Rick Olson)

The Wild season didn’t just end with a thud last Thursday when the Blues outclassed Minnesota by five goals to end their first-round playoff series in six games. It also brought Wild general manager Bill Guerin and coach Dean Evason face-to-face with a future they were hoping to avoid with the team’s first real playoff run since 2003. 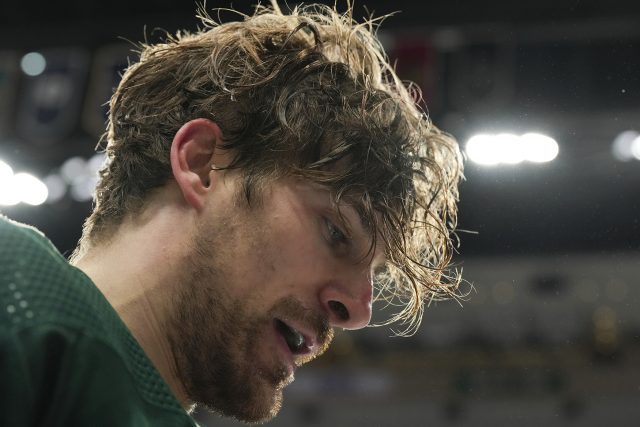 Marcus Foligno and his Minnesota Wild teammates once again find themselves with plenty of time to ponder what went went wrong in the postseason. (MHM Photo / Rick Olson)

Instead of using home-ice advantage to get past St. Louis before taking their chances against Colorado, the Wild bowed out in the opening round for the sixth time in seven years. The other time, 2018-19, Minnesota failed to qualify for the postseason.

It wasn’t shocking the Blues, who won the Stanley Cup in 2019, eliminated the Wild, but it was shocking how they did it. After taking a 2-1 lead in the series with a near perfect road performance in Game 3, the Wild got sloppy in dropping Game 4, fell apart in the third period of Game 5 at Xcel Energy Center and didn’t bother to show up in Game 6.

It was what you would have expected from the Wild team that included Mikko Koivu, Zach Parise, Ryan Suter, Jason Zucker and others. But they had all been cleared out by one-year-and-done general manager Paul Fenton and his replacement, Guerin. All season long everyone associated with the Wild, from the front office to the players, talked about how tight this group was and how much different everything felt with the locker room lawyers long gone.

This team was likeable and had leaders who seemed to care more about the final score than their ice time. That’s what made the end so hard to stomach. The Wild had spent all season thriving when adversity hit and, yet, in the opening round this roster didn’t look any different from so many that had gone before it.

And, now, as well as this group got along en route to setting franchise marks in wins (53), points (113) and goals (310) it will suffer at least one, if not more, key departures. Guerin’s decision to clear Parise (not surprising) and Suter (a shocker) out of the locker room last July by buying them out, enabled several players to have more important roles both on the ice and in the locker room. The gamble was the buyouts — which amounted to a reasonable $4.7 million in 2021-22 — now will result in three years of massive salary-cap headaches for the Wild.

The dead cap hits will be $12.7 million next season and $14.7 million each of the next two years. The NHL salary cap for 2022-23 will be $82.5 million, meaning it’s slashed to $69.8 million for the Wild. That leaves Guerin with only $8.18 million of available room as the offseason begins and that’s not enough to field an entire roster.

If Guerin faced this dilemma coming off a run to the Western Conference Finals, or better yet, the Stanley Cup, the problem wouldn’t be nearly as daunting because the success would have been so great. No matter how you spin the Wild’s regular-season success, the end was a huge flop. 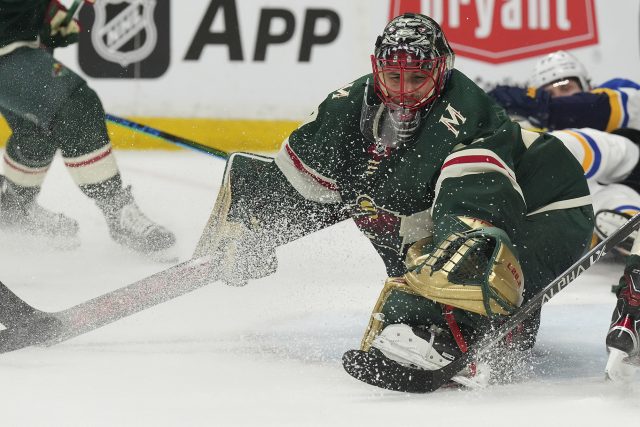 It’s fair to wonder who still will be in a Wild jersey when training camp opens in September. Guerin said at his season-ending press conference on Tuesday that he would like to re-sign veteran goalie Marc-Andre Fleury and wants Cam Talbot back as well, despite the fact Fleury starting the first five games of the postseason didn’t sit well in the Talbot household.

Nonetheless, it won’t be surprising if both stick around.

It will be a surprise if winger Kevin Fiala isn’t moved. The Wild’s second-most talented winger behind Kirill Kaprizov, Fiala had a career-high 33 goals and 85 points in 2021-22 and was brilliant late in the regular season. Fiala’s point total was the second-most in a single season for the Wild, trailing the 108 that Kaprizov produced in a magnificent second season in the NHL.

That came with Fiala playing for $5.1 million and headed into restricted free agency for a second consecutive summer. This is likely the offseason that Fiala is going to get paid on a multiyear deal and, for a while, there were many who thought Guerin should pay that price by jettisoning defenseman Matt Dumba and whoever else had to go in order to keep the Wild’s second-best goal scorer.

That was before the postseason. While Kaprizov had seven goals on 27 shots in six games, Fiala had no goals on 15 shots with three assists and a team-leading 16 penalty minutes. He also was a minus-5. Fiala has one goal in his past 13 playoff games for the Wild, dating to last season’s seven-game first-round ouster by the Vegas Golden Knights.

Fiala should be able to fetch the Wild a far more substantial return than Dumba or anyone else who would be subtracted from the payroll. Teams that have been linked to Fiala in rumors include Ottawa, New Jersey, the Islanders and Vancouver. A high draft pick or big-time prospect, or both, could put Guerin in position to have a player under team control while the Wild are battling cap issues.

“There’s uncertainty,” Guerin said on Tuesday. “I mean, we’d love to have Kevin back. I don’t know if it’s going to be possible.”

Guerin rarely lacks a plan, so he likely knows exactly what he will do when it comes to Fiala. There are other players from this feel-good regular season who are probably headed out the door as well.