Deja vu Between the Pipes

Goaltender Cole Huggins is the second straight freshman to lead Minnesota State to the brink of the Final Five. 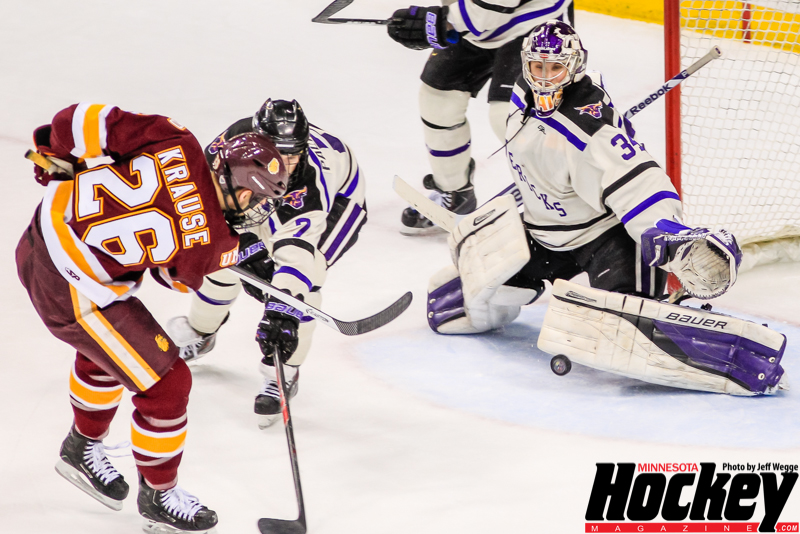 Goaltender Cole Huggins is the second straight freshman to lead Minnesota State to the brink of the Final Five.

The Minnesota State University, Mankato men’s hockey team came into this season sure of a few things; they would compete for the WCHA title, their top offensive performers would shine, and they would have the league’s best goaltender between the pipes.

Interestingly enough, the goaltender they pegged to be their go-to man last season, Stephon Williams, was replaced earlier this season. No worries for the Mavericks, though, as freshman Cole Huggins has emerged as the best goaltender in the league, something the WCHA made official when it named Huggins its goaltending champion when league award winners were announced.

Huggins started 15 of Minnesota State’s last 17 games en route to a 17-7-1 overall record to go with a 1.96 goals-against average (good for ninth in the nation) and a .922 save percentage. He tied the school record for shutouts with five, including three in the Mavericks’ final four games heading into this weekend’s best-of-three WCHA first-round series against Northern Michigan at the Verizon Wireless Center.

With 16 saves in last night’s 3-2 win over the seventh-seeded Wildcats, Huggins and his No. 2 seeded Minnesota State teammates are in a position to earn a second straight trip to the Final Five with a win in tonight’s rematch with NMU. This time, though, the Mavs would one of the favorites to sit on the throne atop the conference, catapulting them into the NCAA tournament for a second consecutive season.

A year ago, Williams was racking up multiple honors from the WCHA in his freshman season. He was awarded WCHA Rookie of the Year, WCHA Goaltender of the Year, First team All-WCHA, and WCHA All-Rookie team. Williams did so well last season that the New York Islanders selected him in the 2013 NHL Entry Draft.

So when this season started, it was considered a certainty that Williams would lead the way for the Mavs as they embarked on their journey into a newly constructed conference where they were the favorite to take home the crown.

Huggins also believed Williams would see the majority of minutes.

Huggins quietly waited for his opportunity. The Centennial, Colo. native came to Mankato from Coquitlam, B.C. where he played two seasons of junior hockey with the Coquitlam Express of the British Columbia Hockey League (BCHL), widely regarded as the second best junior league in North America—outside of the Canadian Hockey League (CHL)—behind the United States Hockey League (USHL).

Coming in as a freshman, Huggins assumed the role of second string goaltender, knowing he would get his minutes to prove himself. After seeing little action through the first six games of the season, Huggins got his shot at home against the Bowling Green State University Falcons early in November.

After Williams struggled in the Friday night game, Huggins played the second half of the game which ended in a 4-3 Mavericks loss. However, the next night Huggins led his team to a 1-0 overtime victory over the Falcons with a 33 save shutout, the first of four this season. Since then, the net has been all Huggins’.

Just two weeks after he cemented his place in the net for the Mavs, Huggins again posted an overtime shutout victory over Bowling Green, and this time it earned him WCHA Rookie of the Week honors for the week of Nov. 18th. Two weeks ago, Huggins racked up another honor to his list of accomplishments this season, when after two wins and a shutout at Lake Superior State University he was named WCHA Defensive Player of the Week.

Earlier in the season, Maverick head coach Mike Hastings said of Huggins, “He goes to work every day, that doesn’t go unnoticed.”

It’s just that kind of work ethic that has gotten Huggins to where he is. More importantly, the saddle will be placed on his back as he’ll be the go-to guy in net this time around in the postseason. But the rookie remains modest.

“I try to just keep my mind focused on the play that is going on and play one period at a time,” Huggins said. “The defense has really made my job easier so far this year.”