The Pioneers defeated the Huskies 4-1 at the NCHC Frozen Faceoff. 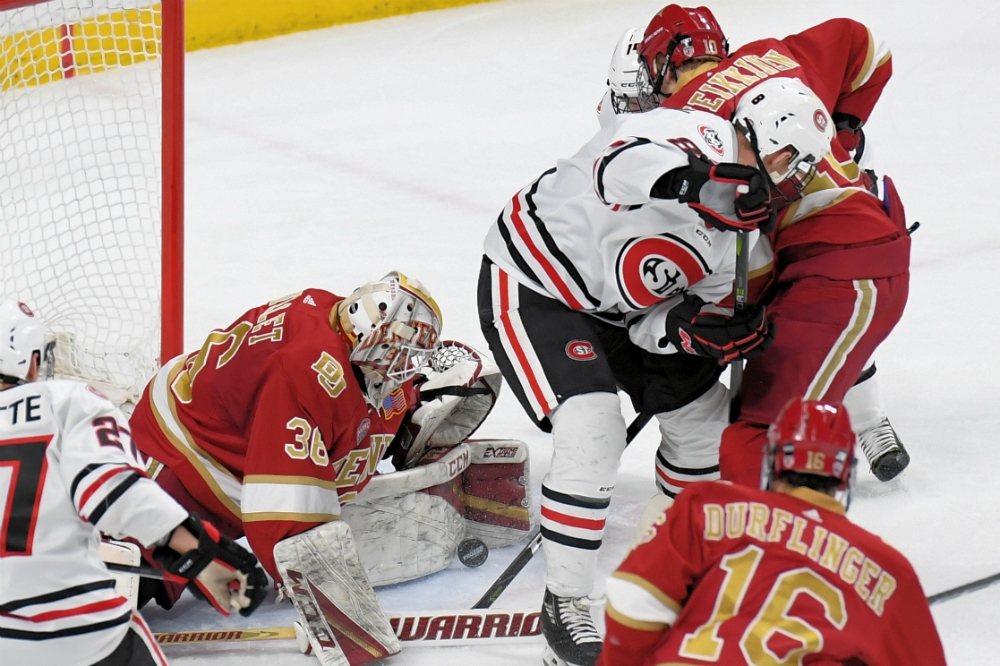 Denver University probably had fewer fans at the Xcel Energy Center this weekend than the mite hockey teams that entertaained customers between periods of the NCHC tournament.

The Pioneers, after dispatching Minnesota-Duluth 3-1 in Friday’s semifinals, cruised to a 4-1 victory over No. 1-ranked St. Cloud State at the NCHC Frozen Faceoff championship game on St. Patrick’s Day at the Xcel Energy Center.

Strangely, Saturday’s assorted results around the nation should allow the Bulldogs to sneak in the NCAA tournament which begins next week. Meanwhile the University of Minnesota — which is scheduled to host the Frozen Four later this spring at the X — was ousted from tournament play.

The Huskies, who reached the final with a 3-2 overtime win over North Dakota Friday, had already clinched a spot in the upcoming NCAA tournament but never seemed to get on track against the fourth-ranked Pioneers.

The Pioneers climbed in front when a shot by Kohen Olischefski caromed of the skate of a defender and past goalie David Hrenak just 4:24 into the first period, then made it 2-0 with just six seconds left in the period when Jake Durflinger potted a long rebound.

Pioneers coach Jim Montgomery said he figured there would be no letdown from his guys over the intermission.

“You can’t relax,” he said. “If you play prevent defense against St. Cloud, you’ll be two goals behind in a matter of five minutes.”

Instead, the lead ballooned to 3-0 less than three minutes later — just 2:06 after the first intermission — when Ryan Barrow’s backhander from the left circle beat Hrenak and prompted Huskies coach Bob Motzko to insert backup Jeff Smith in the net.

“He really wasn’t at fault,” Motzko said. “They were kind of fluky goals.” 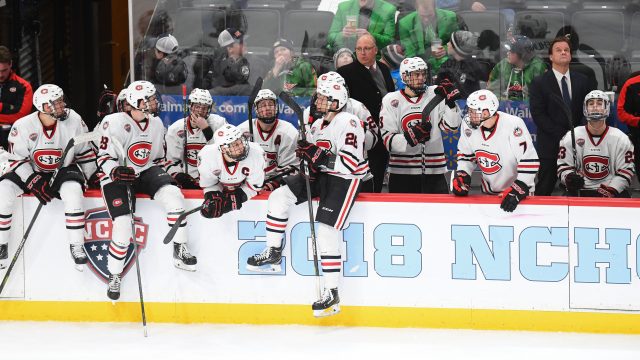 St. Cloud, despite the repeated urging of the Huskies fans in the announced crowd of 11,372 that was inflated with customers from Duluth and North Dakota but almost nobody from Denver, simply could not break through against Denver’s defense and goaltender Tanner Jaillet.

Jaillet made 28 saves and was picked as the tournament MVP.

“In the first five minjutes we were on our heels and St. Cloud was coming at us,” Montgomery said. “Obviously the tournament MVP stood tall in those moments, and after we scored that first goal we really started to play Denver hockey.”

The second goal, at 19:54 of the opening period, was an even bigger difference maker, according to Jaillet.

“Us being able to get that one before the end of the first was huge,” said Jaillet, a senior from Red Deer, Alberta. “From there, we just kept rolling.”

It didn’t help St. Cloud’s cause that the Huskies, trailing 3-0 after two periods and needing a jolt of offense, picked up three penalties in less than a six-minute span of the final period.

“We were going,” Motzko said. “We killed them all off and we got our momentum, but after we made it 3-1, we had a couple of great chances and they got another fluky one. That was a tough spot that we were in.”

The Huskies’ goal by Ryan Poehling at 15:54 of the third period was offset by Dylan Gambrell’s goal just 1:12 later, ruining any chance for Motzko to try to pull his goalie and further whittle the lead.

Despite Saturday’s loss to the Pioneers, St. Cloud State should be in firm position for the No. 1 seed at the West Regional in Sioux Falls.

Meanwhile, Minnesota State-Mankato, which was eliminated in WCHA semifinal play last week, will likely secure a No. 2 seed in one of the four regionals because of their strong, consistent play this season.

As for the University of Minnesota, an unprecedented, doomsday style of events unfolded. The program needed a win from one of six teams on Saturday to carry them into the tournamet: Clarkson, Providence, Robert Morris, Ohio State, Northern Michigan or St. Cloud.

And all six lost.

Coming into play on Saturday, there was only a 1/64 chance of the Gophers not making the tournament and that one minuscule outcome came true, according to College Hockey News.

Yet, because the Gophers was bounced, it’s likely that the Minnesota Duluth Bulldogs have secured a spot the 16-team tournament, which will be announced on Sunday morning, March 18.