Denver’s win sets up a conference championship showdown with SCSU. 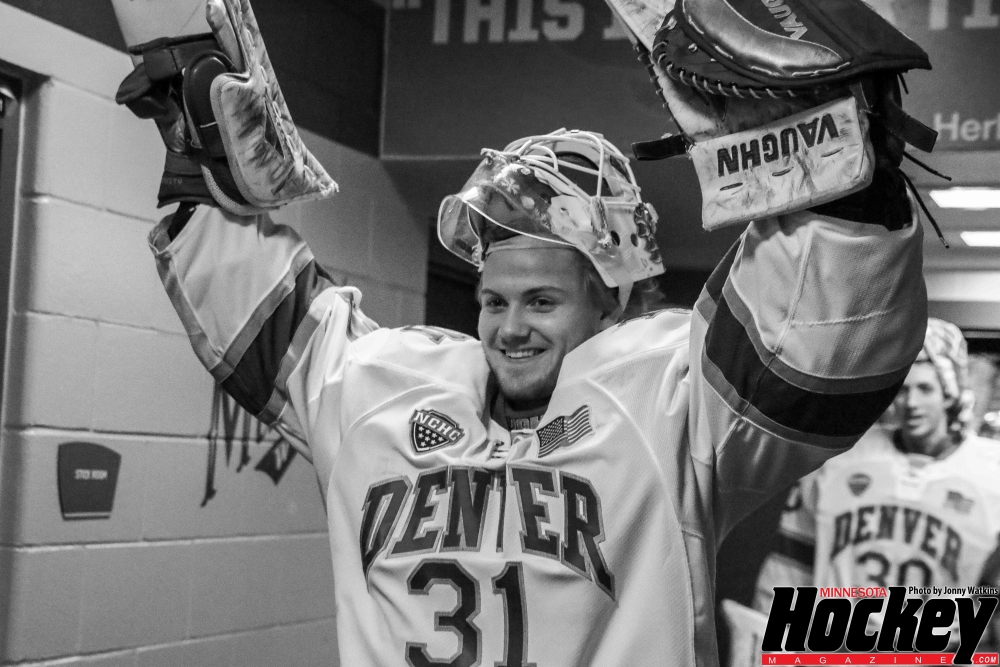 The Denver Pioneers cashed in on their limited opportunities and advanced to the NCHC Championship game with a 3-1 win over the Minnesota Duluth Bulldogs.

Both Denver and Minnesota Duluth have played a multitude of tight games in the past year. Coming into Friday’s tilt, nine of the last 10 games have been one-goal contests.

Even though Denver picked up a rare two-goal win over it’s conference foe, they certainly didn’t waltz their way to victory.

The Pioneers got off to a flying start. After peppering pucks on net in the early stages of the first period, they also held UMD to zero shots during the first seven minutes as well. Shortly thereafter, the Pioneers drew a power play and it only took them ten seconds into the man advantage to light the lamp with Henrik Borgstrom whistled a point shot past opposing goaltender Hunter Shepard for his 22nd goal of the season.

After the Bulldogs tied it at one, Denver continued its opportunistic play, retaking the lead at the 4:22 mark of the second period on a gritty goal from junior forward Colin Staub, which put the Pioneers up for good. Denver ended up finishing with just 19 shots in the win and 10 of those came in the first period. They also racked up 21 penalty minutes.

“I think we killed ourselves with the momentum in the game,” Denver coach Jim Montgomery said. “It wasn’t intentional to take our foot off the gas. We just took some needless stick penalties that changed the momentum of the game and they started getting scoring chances. Duluth’s a real good college hockey team and they’re going to be in the tournament for a reason and you give them momentum they’re going to come at you.”

Pioneers let the Bulldogs off their chains

The lone blemish on Denver’s first period start came when that they took a foolish cross-checking penalty at the 19:52 mark. With the Bulldogs rested and up a man to begin the second period, Hibbing native Scott Perunovich tied things up for Minnesota Duluth.

UMD continued to buzz throughout the second and even drew a 5-on-3 power play for 59-seconds but could not cash in. As the second period winded down, once again, Denver played recklessly. Defenseman Blake Hillman drew a game-misconduct for a hit from behind on Bulldogs forward Blake Young, giving Minnesota Duluth a five-minute major power play to close out the second. After being limited to just four shots in the first twenty minutes, Duluth outshot Denver 16-4 in the second period.

“I thought our team was great for the majority of the first period,” Denver goaltender Tanner Jaillet said. “They only had four shots, they didn’t generate much. So obviously we were expecting them to come with a bit more of a push and just throw pucks on the net. And I thought we had there push pretty well. 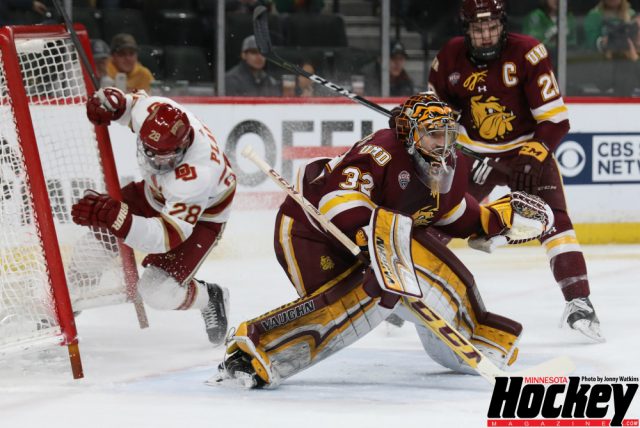 Duluth gets too cute

After failing to score in the first 2:22 of the power play, Minnesota Duluth went into the second intermission well rested and still had 3:38 of power play time to work with. Yet the Bulldogs were too cute with the puck and Denver ended up killing off the penalty while allowing just one shot on net during the man advantage.

“Our execution wasn’t good enough,” UMD coach Scott Sandelin said. “We had opportunities to get pucks to the net. We were trying to make hard plays, we didn’t come up with enough speed. Again, you got to execute we had opportunities at the end of the period to get pucks there and we didn’t. We tried to force some plays and they were a little more aggressive off the zone entry and we didn’t have the support.”

After the power play, it seemed as if Minnesota Duluth was defeated and the team ended up with just five pucks on net in the final period of regulation.

With Denver’s win, the Pioneers will meet the St. Cloud State Huskies for the rights to an auto-bid in the NCAA Tournament as well NCHC Tournament champions. However, with both teams sitting pretty in the Pairwise, it’s likely the loser of the championship game, will still have a higher seed at the tournament.