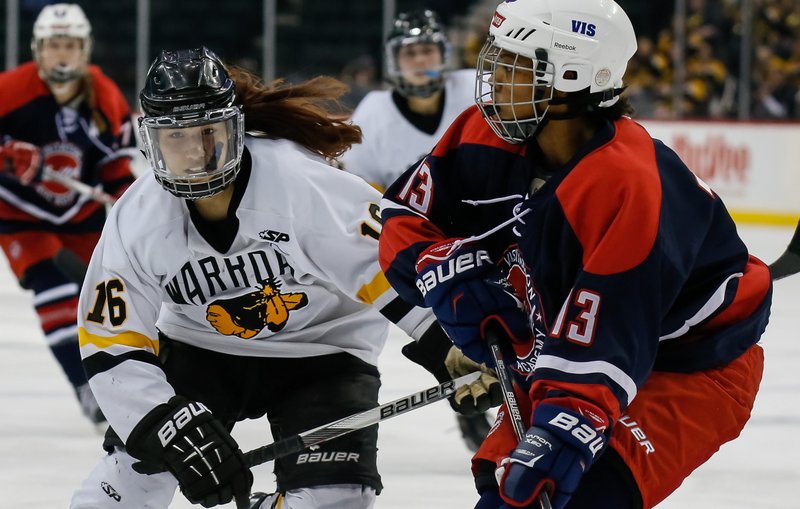 “In 1998 I had a daughter in seventh grade, and at the time the only sport (in town) for girls in the winter was basketball,” former Warriors’ girls’ head hockey coach Ron Tviet said. “We know how many kids are going to play on a basketball team. A couple of other dads and I were at a 7th-grade girls’ basketball tournament. We thought women’s hockey was going to blow up. We should get on the bandwagon.”

That conversation started a chain reaction in the community that would not be stopped.

“I went to church the next morning with a friend, Albert Hasbargen, the manager of the hockey arena,” Tviet recalled. “We went to breakfast after church. We were talking, and he said ‘when do you want to start?’ The next day he called me and said ‘I scheduled you for ice time next week.'”

Tviet, a teacher in the Warroad school system and first coach in the history of the girls’ program, got on the PA system and made an announcement to the school Monday morning that a meeting would be held in his classroom.

“He talked to me right after the meeting asking me about what I was going to need and what my thoughts were,” Tviet said.

Although they had kids and the support of the AD, they still needed money.

“Kathy Unertl, our city clerk, suggested we contact the Minnesota Amateur Sports Commission,” the former head coach said. “She wrote the grant, and we ended up getting almost $14000. That ended up buying our equipment. We had to have some matching funds for the grant. CCM and Christian Brothers were a great help. We were off and running.”

They were off and running with a 15U and a 12U team. The plan was to stick with youth hockey for three years and then jump to high school. Like the program’s start, everything was accelerated.

“I think I had six girls (on the 15U team) that had been playing with the boys already,” Tviet said. “That was a key to our success.” 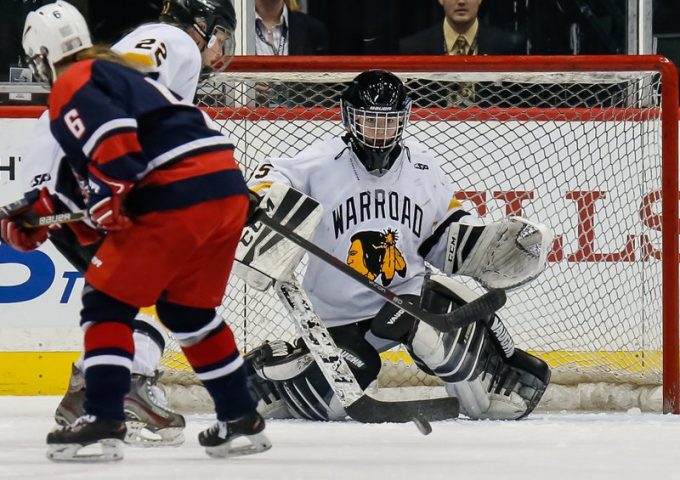 Another key to early success was Tviet, who had coached at various levels in the Warroad system for 23 years, 17 of them at the squirt level.

“If you take out those six girls, the rest of the girls were about at that level,” he said. “I am not much of an X’s and O’s coach. I am a skills coach, but that is what we needed at that time.”

The first year schedule did not allow the Warriors much time to test the waters. The Warriors opened up against an established Grand Rapids program which had Tviet questioning his scheduling decision.

“We ended up beating Grand Rapids 3-2,”Tviet said. “Then Bemidji was having a 15U tournament. They needed another team, and they called to see if we would play. I remember thinking to myself ‘I don’t want to throw these kids to the dogs’ but we agreed to go to the tournament. We ended up winning the tournament.”

The first-year program would finish the season undefeated and won the Class B state championship.

Tviet said an essential aspect of the immediate success was the commitment from boys’ program and its coach at the time, Cary Eades.

“He made sure the boys supported the girls,” Tviet said. “One time we were in a playoff game in Hibbing in the morning and Cary had his kids do a team breakfast, and then they all came to our game. He was supportive in every way. That is something you don’t see in every community.”

Not surprisingly, the AD got behind the program from the very beginning.

“At Christmas, Keller came to me and said it looked like we were ready to make the jump to a varsity program after one year,” Tviet said. “We sat down and put together a budget, a schedule, and he said he would take it to the school board and we will go from there. The school board approved it for the next year, and that was it.”

With no teams close to Warroad, the travel schedule for the first year was brutal. Tviet, estimates the team put on 4,500 miles in its inaugural varsity season.

“The kids lived on the bus,” Tviet told Minnesota Hockey Magazine. “They would do homework on the way to the games and on the way home they would bring pillows and sleeping bags and would sleep in the seats or on the floor. We would get back to Warroad at two in the morning, and there would be the parents, waiting to take the kids home.”

Support for the Warrior girls didn’t just come from the school. It also came from what Tviet and current head coach David Marvin call ‘the important hockey people in Warroad.’

“The people who were respected the most in the community wanted to see our girls’ program be successful,” Marvin said. “When they put their name behind it that meant ‘everybody get behind it.'”

Chief among those ‘important hockey people’ was Marvin’s dad, the legendary Cal Marvin, who passed away in 2004.

“Cal Marvin was the godfather of Warroad hockey,” Tviet said. “He was instrumental in supporting the endeavors of girls’ hockey. He was behind it one hundred percent.  He kept a watchful eye over everything. He had a spot in the rink where he would watch practices. If there was ever anything you wanted to know or anything you needed, you went to him. He was a quiet guy but when he spoke you listened.”

The girls’ program was immediately taken in by the community.

“A lot of girls’ programs spin their wheels fighting for equality while we just have to spend our time figuring out how to get better,” David Marvin said. “When kids play girls’ hockey in Warroad they know they are not second fiddle. We get prime ice times. We get great schedules; we get everything the boys get. In some ways we get more things than the boys. The girls know they do not have to worry about equality or fairness. It is established.”

Tviet added, “When girls’ hockey came into many communities they had to fight for everything. That was not so in Warroad. The community opened their arms, and we were taken in just like that.” 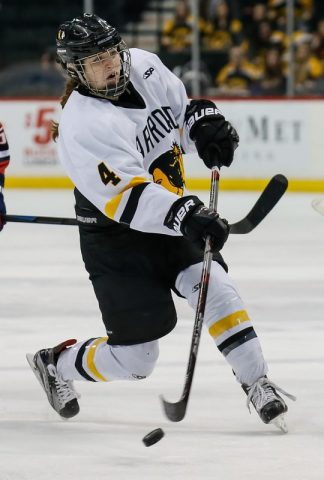 The level of commitment to hockey – boys or girls – is not lost on the residents of Warroad, least of all someone who grew up in town, the team’s current head coach.

“As a kid growing up in Warroad you didn’t know any better,” Marvin said. “There weren’t a lot of things to do, but the arena was always open. That is where you went; that is just what you did. Later on in life, I realized that Warroad is pretty special with the free ice and things like that. As a kid, we didn’t know that we just went to the rink and had fun.”

“We had a high school coach in Warroad years ago named Tom King. He said ‘what we have in Warroad is a commitment – a commitment to excellence.’ That fits the girls’ program well. The people who are involved in the program are dedicated to the program.”

After three years behind the varsity bench, Tviet decided to step down.

“I had been coaching for almost thirty years, and I was ready to get out,” he said. “I was more of a skills coach, and when I left, they were ready to take the next step. Three years after I left they were in the state tournament with Scott Knudsen as the head coach.”

Five years after Tviet stepped down, Marvin stepped in.

Marvin took the head job in 2006 and was behind the bench for five straight state tournament appearances, including back-to-back championships during the 2009-10 and 2010-11 seasons.

“Mostly I had to open the door and know not to interrupt them,” Marvin said of the state championship teams. “They were that good. They were that type of kids where I just had to make sure I didn’t screw it up.”

In all, Warroad has made eight state tournament appearances with three runner-up and three third place finishes in addition to its two titles.

Marvin has surrounded himself with a solid group of assistant coaches ever since he took over.

“Derrick Comstock has been with the program since the beginning,” Marvin said. “He works with our defensemen. Darrell Shaugabay has been a youth hockey coach for thirty years and has been my assistant for the past five years. A couple of my former players, Beth Olson and my daughter Layla, are also on my staff.”

This season Warroad should have another strong team.

They will be known in a program whose roots took hold in a basketball gym and over bacon and eggs, but was built on the backs of a group of athletes and a community that – unlike few others – embraced the idea of a girls’ program when it wasn’t a popular position. Never second-class citizens, they started with an improbable undefeated start and have never looked back.