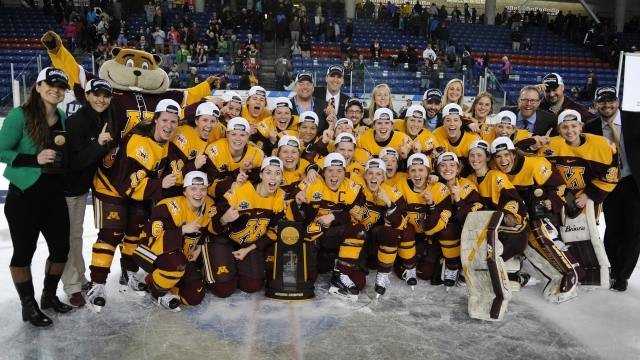 DURHAM, N.H. – After their latest national championship, this one their fourth in five years, even Gophers women’s hockey coach Brad Frost shook his head in amazement at the accomplishments of his program.
With a piece of net from the Gophers’ 3-1 national championship victory over Boston College in the pocket of his button down shirt, Frost reflected on a five year run better than any other in women’s college hockey history.
“We’re just in the midst of a stretch here where it’s kind of mind-blowing,” Frost said. “When you’re in the midst of it, it’s hard. I remember when we went 41-0 and won the national championship in 2013 and I said the same thing. It’s just surreal. You never get used to it. Every time is a little different and super exciting.
“When this eventually, ends we’ll be able to look back on it and say this was one heck of a run. To get to five national championship games in a row is nuts. And to win four of them? That’s where the surreal comes in.”
The Gophers’ latest national championship adds to a dynasty that’s already among the best in collegiate sports history.
The 2016 NCAA national championship trophy that the Gophers were presented on the ice here at Whittemore Center on the campus of the University of New Hampshire will return to Dinkytown to join trophies from 2000, 2004, 2005, 2012, 2013, and 2015.
“It never gets old,” said Frost, the ninth-year coach. “We’re just so excited and happy and grateful to have won the 2016 national championship. It’s somewhat surreal. Just so proud of our team and how they have come together here in the last latter part of the year. Our second half was tremendous and brought us great momentum coming into the tournament.”
In reaching the pinnacle of women’s college hockey again, the Gophers had to beat a Boston College team that was threatening to become the second ever to record an unbeaten team, a feat only ever accomplished by the 2013 Gophers.
But behind a game-winning goal from Amanda Kessel, the Gophers (35-4-1) handed Boston College (40-1) their first loss of the season.
“We didn’t talk once about ending their perfect season,” Frost said. “It was all about playing in the national championship game and doing our best to go out and win it. BC had a tremendous year. Any time you can get to the Frozen Four is a great job let alone go 40 wins in a row.”
Kessel’s winner capped a remarkable run in her return to hockey, the sport that caused concussion symptoms so severe she missed a year and a half from hockey.
At the end of the Gophers win, as the players hugged between a scattering of sticks, gloves, and helmets thrown in celebration, Kessel spent time to reflect on her remarkable journey.
In 13 games since her February return, Kessel scored 11 goals, none bigger than the game-winner in her college hockey finale Sunday.
“I thought I’d be more emotional going out,” she said. “There was a moment maybe a minute after we won where I was sitting there almost laughing to myself. I can’t believe it. I never would’ve imagined this happening. I’m just so grateful. I’m waiting to wake up. It’s just unbelievable.”
At the end of each Gophers win this season, the team played Shania Twain’s, “Man! I feel like a woman” in the locker room, a tradition Frost usually avoided.
After another national championship Sunday, the song again blared from the team’s locker room.
But this time, Frost entered the room to celebrate with his team, national champs once again.
Asked at his postgame news conference whether he sang or dance, Frost smiled.
“He sang,” interrupted Kessel, seated next to Frost.
“I might’ve sang and danced just a little bit,” Frost said.
Such is life at the helm of a dynasty.