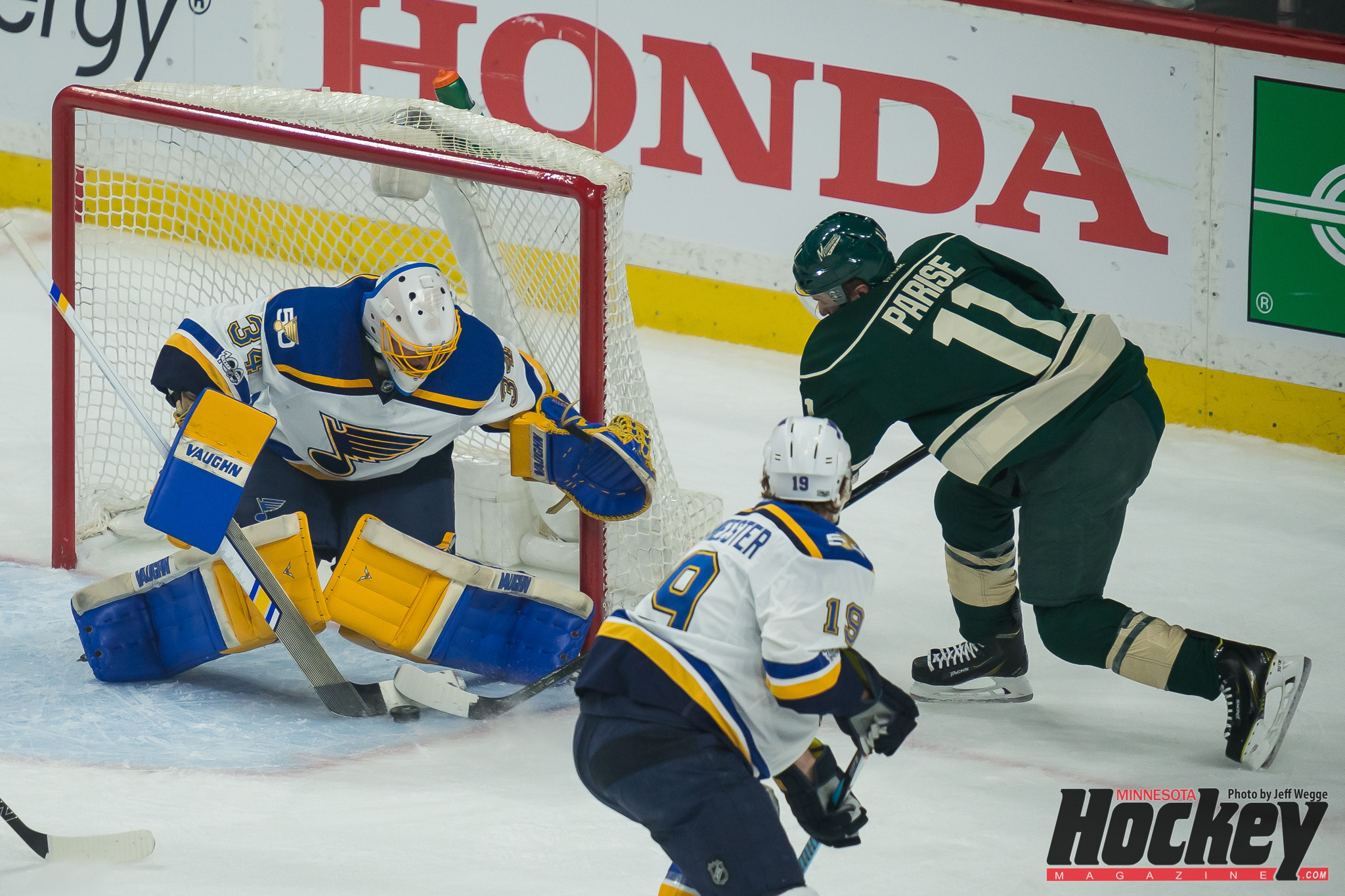 St. Louis goaltender Jake Allen stops Minnesota’s Zach Parise for one of his 51 saves  in the Blues’ 2-1 overtime win over the Wild on Wednesday night at Xcel Energy Center. (MHM Photo / Jeff Wegge)

The Wild learned that a few seconds after midnight on Thursday morning at the Xcel Energy Center as players tried to figure out how they could launch 90 attempts at the St. Louis Blues’ net and score only once.

“It was a heck of a game,” Wild coach Bruce Boudreau said.

It was, as 19,168 spectators could attest — until the Blues got a goal from Joel Edmundson 17 minutes and 48 seconds into overtime to record a 2-1 victory in the first game of a best-of-seven Stanley Cup Playoff series.

Boudreaux was heartened by the statistics: Minnesota outshot St. Louis 52-26 and fired another 38 shots that were either blocked by defense or went wide.

“We had 90-some shots at their net,” he said. “We had 52 shots on the net. I thought territorially we were pretty good. We had a lot of mistake-free chances, chances that would probably be quite in our favor, so that’s what I’m taking out of it.”

The first game of the series evolved into the Jake Allen story: Allen made 51 saves and missed only a shot by Zach Parise with Minnesota’s goalie pulled and just 23 seconds remaining in the third period.

Other than that: zilch.

“It’s disappointing we didn’t get that one,” he said. “I thought we played well, generated a lot, didn’t really give up much. It’s unfortunate when you come out on the losing side of one of those.”

Allen, Parise added in a bit of an understatement, “played good.”

And then some, if you ask Boudreau or probably anyone else in the Xcel Energy Center Wednesday evening (and into Thursday).

“It didn’t look like we were going to get much by him, the way he was playing tonight,” Boudreau said.

“I thought he was phenomenal,” Blues coach Mike Yeo said. “Really not much to say. He was outstanding. He was challenged in so many situations and certainly stepped up.”

Minnesota dominated this game in every way but the final score, winning 59 percent of the faceoffs and outhitting the Blues 35-18.

Wild goaltender Devan Dubnyk faced less of a barrage than Allen, but was equally strong through 77 minutes.

“The outcome wasn’t there,” Dubnyk said, “but I think if we play like that every game, we’re probably going to get good results. The important thing I guess when a game like that doesn’t finish how you want it to is to just make sure you keep doing what you’re doing. If we stick to that we’re going to be tough to beat.”

While Minnesota’s players tipped their hats to Allen, they also came away convinced about their own abilities.

“I think we can get a lot from that,” winger Jason Zucker said. “There’s a few tweaks that we’ll make, but we’ve got to bring that same intensity and that same grit to our game and push for 60 minutes.

“For us, there’s another six games to be played. Obviously it’s disappointing; we wanted to win this game, but overall we can’t get down on ourselves and sit back with a ‘poor me’ attitude. We’ve got to regroup tomorrow, come back the next day and make sure we’re ready to go.”

The end result seemed bizarre when you factor in things like this: Charlie Coyle was one of four Wild players with at least six shots on net, and one of his best opportunities came from the slot in overtime.

He shattered his stick and the puck slid wide.

And, when the score was 1-0 in favor of St. Louis in the third period, the Wild lost a potential goal when Parise, falling and reaching for a loose puck behind Allen, actually stopped it from going in.

It was just one of those days.

Probably setting the table for a few to follow.

Said Boudreau: “I expect the rest of the series will be the same, tight-checking, two good goalies going at it.”