On the Ice or the iPod, Dana Rasmussen leads the way for Dodge County. 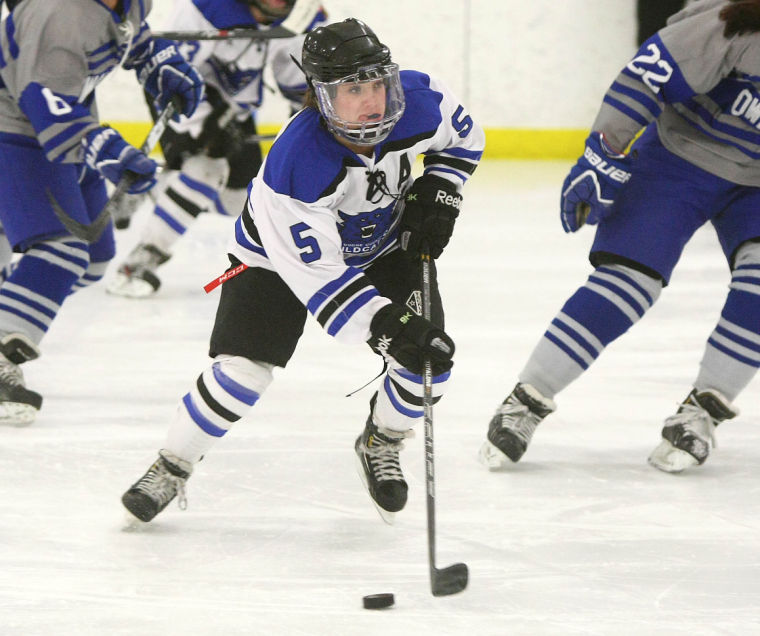 Dodge County’s Dana Rasmussen sets her sights on the Owatonna net in a Feb. 5, 2014 Section 1AA game in Kasson. Rasmussen’s goal and five assists led the Wildcats to a 7-1 win over the Huskies. (Photo: Scott Jacobson / Rochester Post-Bulletin)

On the Ice or the iPod, Dana Rasmussen leads the way for Dodge County.

Leadership doesn’t always come from a rah-rah pre-game speech or getting in someone’s face. Sometimes leadership is much more subtle. It can come from being friends with everyone on the team and keeping everyone loose before the game and then turning it on once the puck drops.

Dodge County left wing Dana Rasmussen is not only one of the top returning goal scorers and point producers in the state, she is also The Wildcats’ resident locker room DJ and magnetic personality according to her coach, Jeremy Gunderson.

“Dana always sits by the music player; she is kind of like the DJ,” Gunderson said. “She is one of those fun kids that are great to have in the locker room.”

The DC Wildcats had a great 2013-14 season, going 22-5 overall, but fell one game short of the state tournament. For the second year in a row they were knocked off by Class AA third-place finisher Lakeville North.

“We were pretty deep on defense and our top two lines were probably as good as any in the state,” said the eighth-year head coach. “We just didn’t have overall depth.”

“She ended up in the top five in goals and points in the state,” said Gunderson. “The thing that separates Dana from a lot of other kids is a burst of speed that very few hockey players have.”

The senior-to-be doesn’t just rely on her speed. A varsity contributor since seventh grade, the right-handed shooting Rasmussen set the school’s rookie scoring record and has played all three forward positions, but the coaching staff realized the off wing is where her skills are best utilized.

“She is not a big kid, but she will play physical and tough,” Gunderson said. “She takes a pounding, but is very strong. She spends a lot of time in the weight room.”

For such an accomplished offensive player, Rasmussen more than holds her own on defense.

“She is a two way hockey player,” continued Gunderson. “She loves to play defense and block shots. She takes a lot of pride in her defensive zone coverage.”

Being such a solid all-around player makes her a scoring threat even on the penalty kill. She had half a dozen shorthanded goals last season.

“Typically you don’t like to use your best kids on the penalty kill and burn their legs up,” Gunderson said. “We put her on the penalty kill because there is more space. We turn her loose on the forecheck so she creates a lot of havoc. She is on our first power play unit as well.”

Despite her obvious talent, Rasmussen doesn’t act like one of the best players in the state according to Gunderson. “If you ask her to do something she does it, no questions asked,” he said.

While Rasmussen is a prolific goal scorer, the volleyball, hockey and softball player is unselfish and a great teammate on and off the ice.

“She is not trying to tell other kids what to do. She is more likely to ask what music we should listen to so she can dance and laugh,” Gunderson said. “When it is game time I know she is going to give everything, but she is not going to get down on her teammates.

“She wants to have fun and wants to compete, but on the ice she will lay it out on the line.”

Some of her goals this year include winning Ms. Minnesota for hockey and making the U.S. under-18 national team. To reach those goals she will not be playing volleyball this fall to give her more time to focus on hockey, including continuing to play for the AAA Minnesota Ice Cats.

Like most of the DC hockey players, Rasmussen takes her classes seriously and is never a concern off the ice. Her knowledge in school translates to her knowledge on the ice.

Her hockey intelligence is easy to spot. The Ohio State coaches noticed it after just a short time talking with the now-Buckeye commit. She had interest from a number of schools, but in the end wanted to play in the WCHA. After looking at all aspects of being a student athlete she took a second visit to a number of the WCHA schools and Ohio State was where she felt the most comfortable.

“She even looked different when she came back from an Ohio State visit,” said Gunderson, the former Dodge County boy’s assistant coach. “Everything she was looking for Ohio State had to offer.”

For Dodge County and, in two years, Ohio State, Rasmussen has a lot to offer too. Whether it is her unique style of leadership, her goal scoring skills, her all-around game or picking the best pre-game song to dance to, she is the kind of player that can make any team better – on and off the ice.