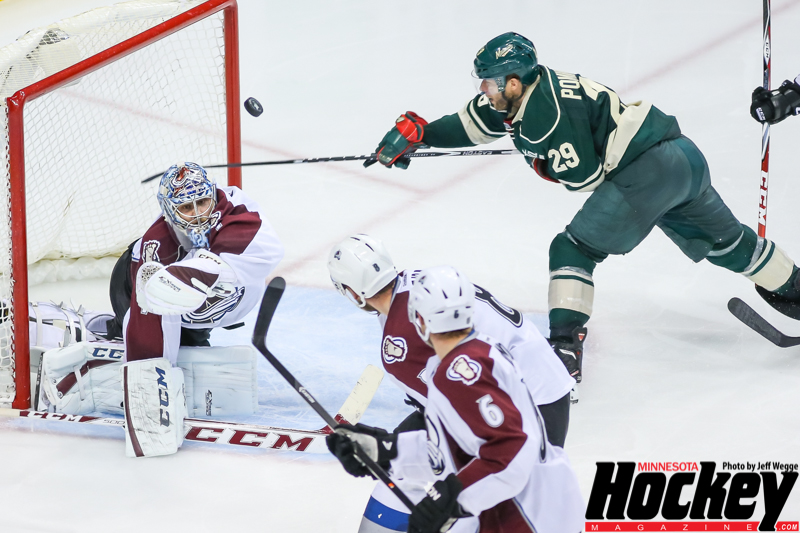 Minnesota’s Jason Pominville tries in vain to get a stick on an airborne puck as Colorado goaltender Semyon Varlamov reaches for it in Minnesota’s 2-1 win on Thursday night at Xcel Energy Center in St. Paul. (MHM Photo /Jeff Wegge)

SAINT PAUL — For the second straight game the Minnesota Wild both bombarded and throttled the Colorado Avalanche and came away with another dominant … one-goal victory.

Jared Spurgeon and Charlie Coyle scored for Minnesota and Darcy Keumper won his second game in as many playoff starts as the Wild nipped the Avalanche 2-1 before a playoff -record crowd of 19,396 at Xcel Energy Center. The win evens the first-round playoff series 2-2 and gives Minnesota two home wins in a playoff series for the first time in seven tries.

“To be in this situation after being down 2-0, that’s obviously a really good thing,” Wild coach Mike Yeo said.  “But at the same time, we have to make sure that we continue to have the focus, that the next challenge is the big one. Obviously we find ourselves now in a best-of-three and we like the way that we’re playing, but we can’t hang our hat on what we’ve done. We’ve got to make sure that we’re ready to go out and continue to take the fight to them.”

The Wild peppered Avs goalie Semyon Varlamov with 32 shots while surrendering a franchise-record-low 12 shots on goal to Colorado. The Wild have outshot the Avalanche 78-34 in the past two games and 143-94 for the series.

“We played in the [offensive] zone, and if you do that, they’ll take penalties and they’ll be chasing us like they did for the most part the last couple of games,” Wild forward Jason Pominville said. “We outshot them like we did because we were doing a lot of good things.”

Minnesota came out of the gate with a blitzkrieg of offensive pressure fueled by slick puck movement which nearly resulted in a lead less than a minute into the game.  Zach Parise carried into the Colorado zone and fell to his knees but, as he slid into the left circle, still managed to find Mikael Granlund breaking up the slot but Granlund’s redirect went up and over Varlamov.

But in contrast to Game 3’s 1-0 overtime win, however, the Wild were, in fact, rewarded early for their effort on Spurgeon’s first playoff goal of his career. Granlund won a battle behind the Colorado net and fed Parise in the right corner who hit Spurgeon for a one-timer between the circles at the 3:47 mark.

Coyle scored his third goal of the series on a power play when Pominville’s shot missed high but took an awkward carom off one of the glass stanchions straight to Coyle at the left post and he put it in the open net at 12:55 of the second.

Minnesota maintained its two-goal lead, it’s first since the third period of Game 1, for all of 30 seconds before Colorado’s Ryan O’Reilly snapped Keumper’s playoff shutout streak at 138:07 dating back to last season. Kuemper has stopped 47 of the 48 shots he’s faced in the series.

The goal only served to strengthen the Wild’s resolve as they held the Avs without a shot for the next 14:27.

With Varlamov already on the Colorado bench in favor of an extra attacker, Minnesota defenseman Jonas Brodin was sent off for hooking with just 2:14 to play setting up a 6-on-4 advantage for the Avalanche. But Colorado could not get the equalizer, thanks in no small part to Granlund who blocked three shots in his final shift to help preserve the win.

“Being out in the penalty-killing situation that (Granlund) was at the end of the game and knowing how important that is, and knowing what his teammates need from him, that’s what we’ve seen from everybody,” Yeo said. “And that’s why we’ve been successful the last couple games.”

Minnesota killed all four Avalanche power-play attempts and the Wild’s penalty kill is now 14-for-15 through four games.

The series moves back to Colorado for Game 5 on Saturday at 8:30 p.m. CT on FOX Sports North and KFAN 100.3 FM in Minnesota, NBC Sports Network nationally.