Wild Dominant But Drop Opener To Kings In Shootout 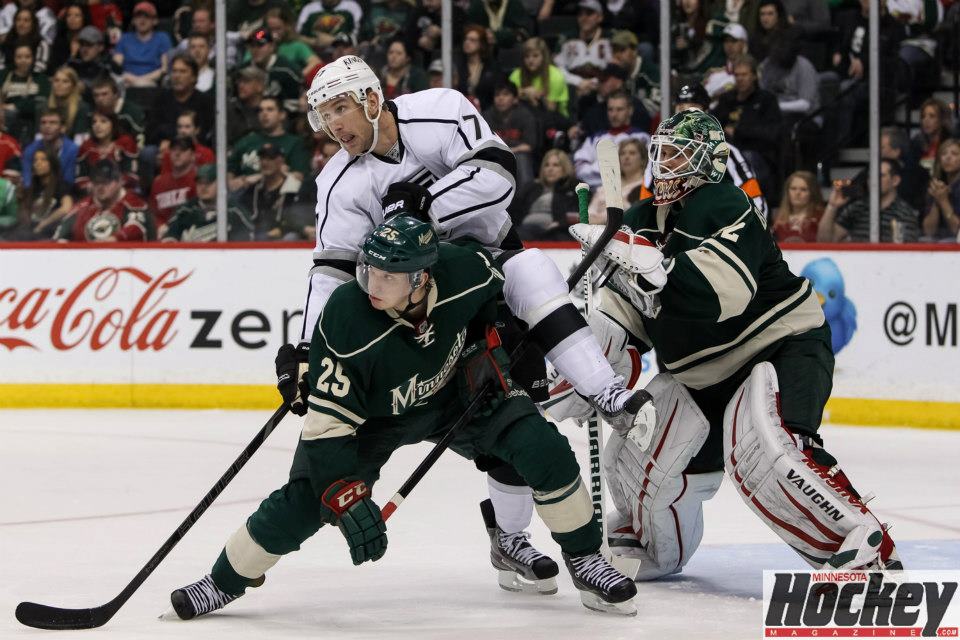 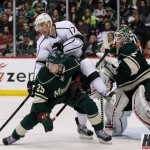 There was a general feeling of hockey nostalgia in the Xcel Energy Center on Thursday night as fake snow fell over fans and a game of “pond” hockey between a father and son took place on the home ice of the Minnesota Wild. Fanfare and smoke welcomed the boys of the State of Hockey back onto the ice for their first match of the season against a decidedly tough LA Kings squad.

Jeff Carter scored the tying goal late in regulation and added another in the shootout to lead the Kings to a 3-2 victory over the Wild on Thursday night in the season opener for both teams before 18,511 in attendance at Xcel Energy Center.

Minnesota goaltender Niklas Backstrom stopped 16 of 18 shots he faced in regulation and overtime but was beaten twice on two attempts in the shootout. The Kings’ Jonathan Quick, meanwhile, turned aside 27 of 29 Wild shots through overtime and denied both Zach Parise and Mikko Koivu in the shootout.

The Wild came out flying, Matt Cooke getting credit for the first goal of the season just 64 seconds into regulation play assisted by Kyle Brodziak and Mikael Granlund after a brief video review.

At 6:09 into the contest Zenon Konopka took a minor penalty for delay of game handing the Wild its first penalty kill of the season. The Kings converted their power play into a usable opportunity and with 29 seconds left on the man advantage Drew Doughty scored LA’s first of the night; assists being awarded to Slava Voynov and Anze Kopitar.

Shortly thereafter Colin Fraser and Keith Ballard got tangled up, each receiving five minutes for fighting, Fraser also taking a two-minute minor for boarding. The Wild’s power play would be unable to convert the chance into a goal.

At 12:06 Nino Niederreiter was sentenced to two minutes for hooking and the Wild displayed a strong penalty kill.

Minutes later Kings Left Winger Kyle Clifford boarded Jonas Brodin. The Wild managed to take advantage of the PP and Brodin would reward Clifford by scoring on the man advantage, assisted by Niederreiter.

The Wild ended an exciting first period up 2-1 over the Kings, outshooting them 11-8.

The second period would see minimal penalty action and no goals tallied for either club. Konopka and Clifford would each be awarded five for fighting; Clifford also took a two-minute minor penalty for tripping; not surprising in post game interview Clifford stated the thing he needed to work on was “taking less penalties.” The Wild managed to repeat the defensive edge they came out so strongly with in the first and continued to outshoot the Kings, ending the period with 24 shots on goal to the Kings’ 11.

The third period would welcome more penalty action early on as the up and coming Charlie Coyle was awarded a face-off violation at 1:52 forcing the Wild to bring their penalty killing unit back on the ice.

At 8:23 in the final period of play LA’s Matt Greene was awarded a minor penalty for slashing followed by teammate Willie Mitchell getting two-minutes for interference at 16:22. The Wild successfully killed four of five penalties before regulation play ended. The Wild wouldn’t find any of their pucks in the back of the net in the third but LA would with Carter tying the game up at 13:14.

Despite the Wild throwing everything they had at Quick they were unsuccessful at putting up another goal and were forced into overtime. Neither team scored in OT and the Wild’s home opener would end in a loss courtesy of LA’s Kopitar and Carter in the shootout.

While the Kings walked away with two points they didn’t leave satisfied with their overall game. Kopitar, Matt Frattin and Clifford all mirrored one another during interviews in that they still had a lot of room for improvement and were not perhaps as ready to go as anticipated by the Wild coaching staff earlier this week.

Wild coach Mike Yeo has made it very clear since the beginning of the preseason that his focus is his team and, while the Wild would leave the rink without a win, they would walk away with their coach’s approval.

Yeo said he like the way his team defended, especially in the first two periods.

“I thought we were frustrating, hard to play against,” Yeo said. “It was tough for them to get ice, to get to our zone, and that allowed us to go back at them a lot. I thought we weren’t as aggressive to the net in the third period.

“But overall it’s really hard to be disappointed with the game from a performance standpoint. If we play like that night in and night out we’re going to win a lot of hockey games.”