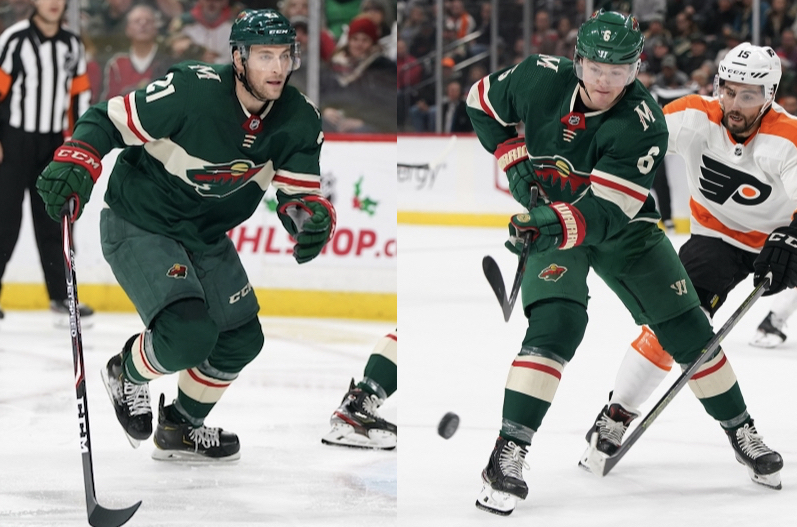 He came over in a trade with Boston for Charlie Coyle, and in his first game at Xcel Energy Center last February, Donato scored the overtime winner against St. Louis.

“Those are the experiences that you’ll remember,” Donato said after that Feb. 24 games. 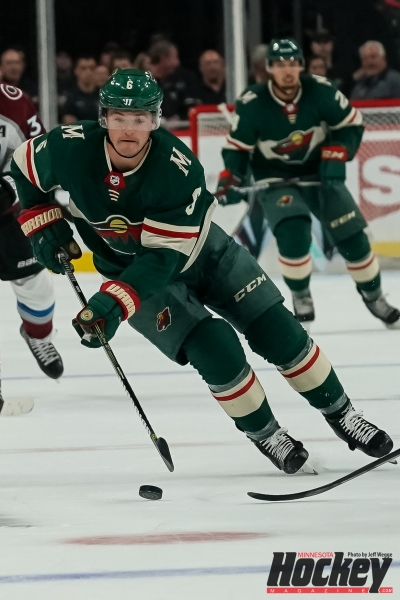 This season has been a bit of a different story, for the Wild and Donato. As the Wild started the season 0-3 getting outscored 14-6, plenty of players on the roster had zeros by their names in the points column. Donato was one of those guys. He had zero points and was a minus-1 twice in the first three games. He was scratched for the Wild’s home-opener against Pittsburgh on Oct. 12.

The Wild finally rattled off wins here and there, but Donato’s slow start continued. He had just two assists in his first 11 games through the first month of the season. His first goal didn’t come until Nov. 7 in a 6-5 loss in San Jose.

Lately, things have turned around a bit. In the absence of captain Mikko Koivu, who is out with a lower-body injury sustained in the Florida game on Dec. 3, Donato is getting his shot to prove himself as a second-line center in between Zach Parise and Kevin Fiala.

Donato set a career-best goal streak at three games with a beauty of a snipe-shot in the second period of Thursday’s 6-5 win over Edmonton; his goal gave the Wild a 4-2 lead. With his assist on Zach Parise’s team-leading 13th goal in Minnesota’s 4-1 win over Philadelphia on Saturday night, he 23-year-old Boston native has five goals and seven points in his last nine games.

“I’m a guy that always wants to have confidence,” Donato said after the Edmonton game. “And I feel like I’ve always had it. But just to see them (goals) go in, definitely helps.

“It’s trying to stay patient, not trying to force anything, to get those opportunities.”

The tide changed for the Wild a bit, too, as they rattled off a five-game winning streak and 11-game point streak starting in mid-November. They even got themselves back in the playoff picture. Then top defenseman Jared Spurgeon and Koivu sustained their injuries, and the Wild laid an egg in Carolina with a 6-2 loss and then a 3-2 shootout loss to Anaheim which kicked off a three-game homestand.

It’s common for key injuries to bring up questions of a team’s depth and a waiting game to see which healthy players might take a step forward.

Donato has helped to fill the void. And so has young defenseman Carson Soucy.

Soucy recorded a pair of assists in the win over the Oilers, playing a big role in the Wild’s first and fourth goals. Down 1-0 in the first, Soucy just missed connecting with Luke Kunin in front. They quickly regrouped, with Kunin sending the puck back out to Soucy who skated to the middle and took a shot from near the blue line. The puck somewhere bounced off of Jordan Greenway’s frame in front before it trickled in to tie the game.

In the second, Soucy helped to create a turnover before passing the puck up the ice to a streaking Donato, who didn’t miss with his blast in tight. Soucy also tussled with Edmonton’s Zack Kassian late in the second period during a post-whistle scrum. 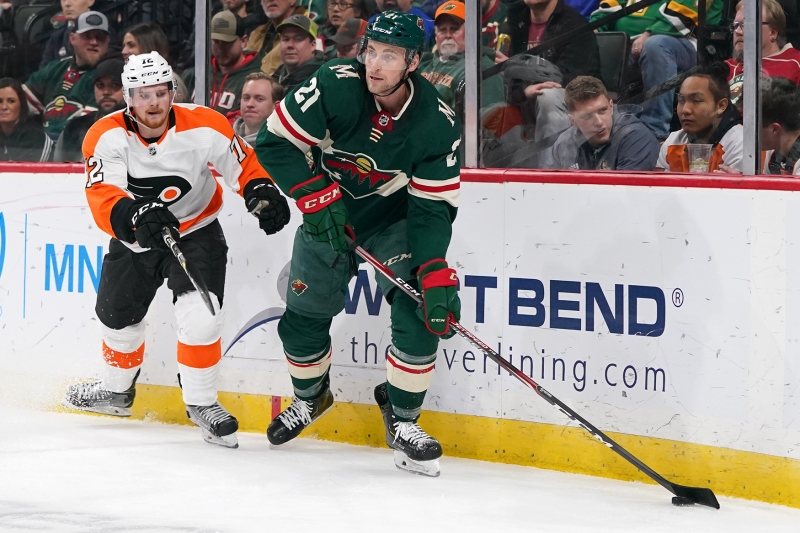 Wild D Carson Soucy looks to break the puck out with Philadelphia’s David Kase in pursuit during Minnesota’s 4-1 win over the Flyers on Saturday night at Xcel Energy Center. (MHM Photo / Rick Olson)

Soucy finished the night with his second multi-point night in his past four games and also a career-high plus-4, tying a franchise record for a rookie defenseman in a game. The mark is also tied for first among all NHL rookie defenders this season. The 25-year-old, Alberta native and product of University Minnesota-Duluth has six points in his last six games (3-3—6) after his 200-foot goal into an empty net sealed the Wild’s win over the Flyers on Saturday.

In the absence of Spurgeon, the left-handed-shot Soucy stepped into the role of playing the right side with Jonas Brodin as the team’s second defensive pair.

“Yeah, I mean he’s made it easy for me,” Soucy said. “Lots of times (he) goes back there, breaks the puck out by himself and we’re going the other way.

“Obviously still getting a little bit used to it on the right side, but he’s made it easy for me.”

As Soucy talked with the media after the win over the Oilers, teammate Marcus Foligno playfully shouted “Dr. Souce!” and “Doctor’s in the house!” from the other side of the dressing room. They really do like him, Sam-I-Am.

Soucy made his NHL debut with the Wild in 2017-18 with seven games (four of those in the playoffs). He spent all of last season in Iowa recording five goals and 20 points in 66 AHL games.

Coach Bruce Boudreau acknowledged that “shock is a good word” to describe Soucy’s play. Soucy has turned into a reliable, everyday player for the Wild.

“I think any team that wants to be good has got to have a surprise player come in,” Boudreau said in his postgame comments Dec. 12. “Him and Brods seem to have found good chemistry together.”

Even coming out of camp in this fall, Boudreau went with Soucy, saying at that time that they needed the size – Soucy is 6-5 and 210 pounds – or a right-handed shot, and they went with size. It was a complete turnaround from a year ago and Soucy “had a really terrible camp,” Boudreau said.

This year, Soucy brought the composure with his game, too, Boudreau said.

“We didn’t know what to expect,” Boudreau said. “And he was aggressive and he moved the puck well and he defended well. So it was all good.”