Down But Not Out

Wild must rebound in St. Louis after another tough loss to Blues 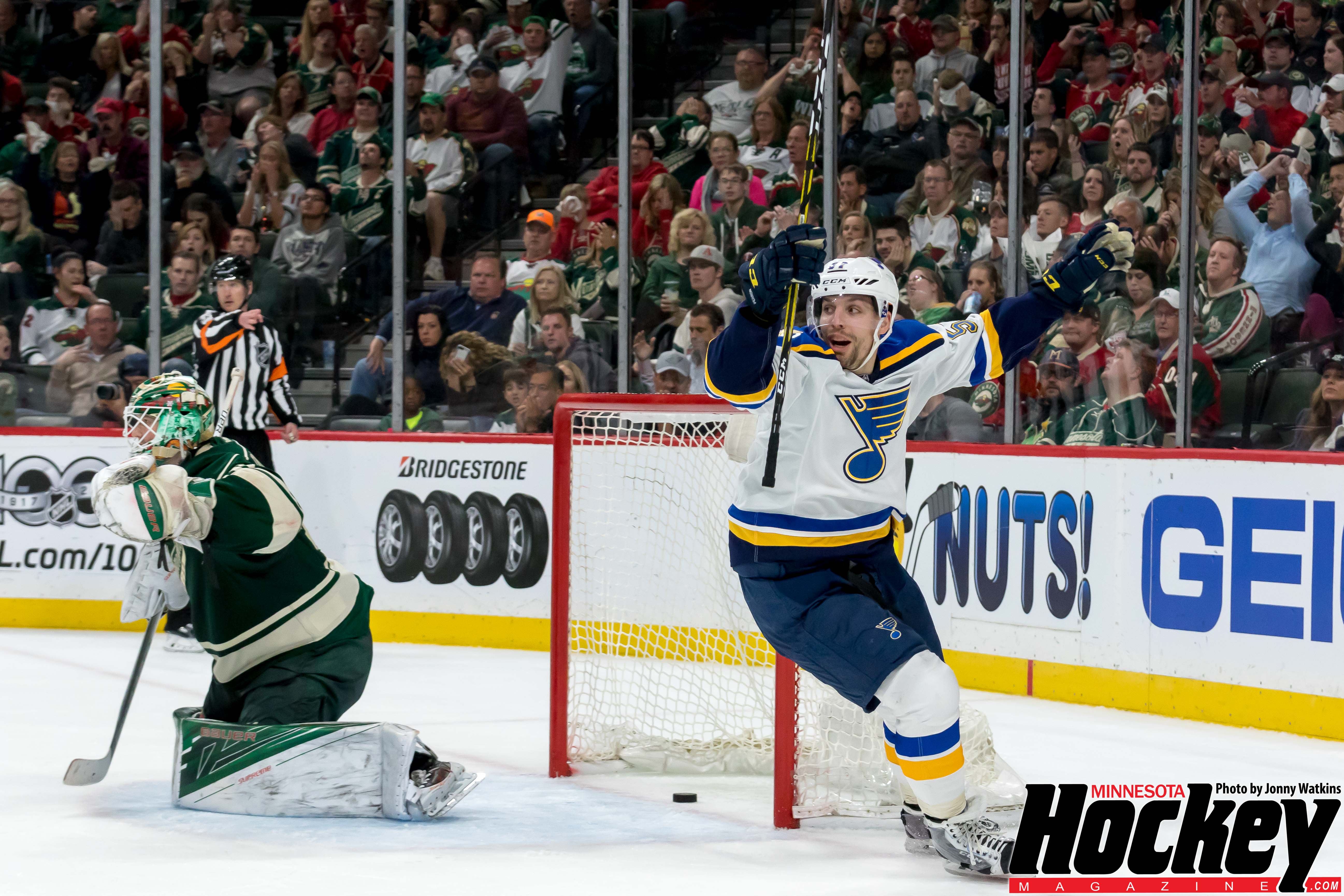 Wild must rebound in St. Louis after another tough loss to Blues

St. Paul – The Wild have inserted themselves into a gaping hole.

“It’s up to us,” winger Chris Stewart said, “to dig ourselves out of it.”

Wild coach Bruce Boudreau, whose Anaheim Ducks team lost two games at home to start a series against the Los Angeles Kings a year ago, noted that the Ducks rebounded in that series.

“You win one game and it’s amazing what that can do,”  Boudreau said. “We just have to go in and look at Sunday and say, ‘OK. Let’s just win one game.’ And take it from there.”

This dilemma arrived because the St. Louis Blues scored with just 2:27 remaining in regulation and grabbed their second consecutive 2-1 victory over the Wild Friday night in front of a season-high crowd of 19,404 at the Xcel Energy Center.

“It’s obviously not the way you want to start,” defenseman Ryan Suter said. “We’ve got to regroup.”

Defenseman Joel Edmundson scored his second goal of the playoffs to give the Blues a 1-0 lead in the second period, but Zach Parise’s five-on-three power-play goal 14 minutes later tied the score.

As in their Game 1 overtime loss, however, Parise’s goal was all Minnesota could manage.

That’s because the Blues, who were outshot only 24-22, came on stronger in Game 2.

For the second time, Jake Allen yielded just one goal for the Blues.

But Allen got a ton of help.

“They clog the middle of the ice up,” Boudreau said. “They’ve got six big defensemen, and it’s hard to get through.”

“They’re defending hard,” Wild winger Jason Pominville explained. “Their goalie has been seeing the puck well, and one thing they do well is they have five guys around the paint so it makes it tough for us to get on the inside.”

Overtime seemed to be looming until roughing penalties against Minnesota’s Charlie Coyle and the Blues’ Scottie Upshall with 4:03 left in the third period set up a four-on-four situation that left Wild goaltender Devan Dubnyk shaking his head after the game.

And not just because Jaden Schwartz took advantage, scoring at 17:33 through a screen that blocked the shot from Dubnyk’s vision.

But Dubnyk especially didn’t like the four-on-four scenario at a critical point in a tie game.

“That’s unacceptable in a 1-1 hockey game, to make that call,” Dubnyk said. “It just doesn’t make sense. You can watch it a hundred times, there’s zero reason.”

Allen made a big four-on-four save at one end, and a few seconds later, Alex Pietrangelo slid the puck to Schwartz for the deciding goal.

“One heck of a shot,” Pietrangelo said.

And, 14 months to the day after a Wild tailspin cost Yeo his coaching job, Yeo recorded his second playoff victory as a visiting coach at the X.

Yeo, as he takes his team back to St. Louis for two games on home ice, has a singular perspective about his situation and his opponent.

“We’re real happy we got both wins in here,” he said, “but I know that’s not a team that’s gonna quit. They’re not gonna go away.”

Exactly, according to Stewart.

Said Dubnyk: “We just need to get the next one. That’s got to be our focus right now. We’ve been a good road team all year, so we’re just going to try to keep playing our game and I think we’ll get some momentum here.”