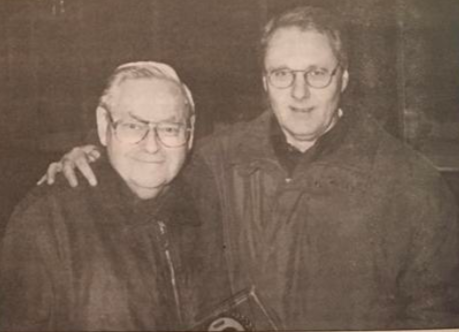 (Herb Brooks presents Dr Harry Brown with LPH’s “Friends of Hockey” award in Feb, 1996.  Dr Brown is credited with starting Junior Hockey in 1965 and was a life long advocate of hockey at all levels. Photo/LPH archives. Other pics from articles noted)

As we celebrate Hockey Day Minnesota Minneapolis 2020 this week, it’s easy to identify many of the key players from the golden age of hockey in Minneapolis.  Dr Harry Brown stands out as one of the most influential supporters and innovators of hockey from the late 1950’s into the 1970’s.  He fits nicely into the circle of notables like Walter Bush, Bob Johnson, Denny May, Dave Peterson and others that touched so many lives.

I asked Joe Brown, one of his sons, to comment what he thought Harry’s Minneapolis hockey legacy is.

He provided this insight.  “Harry always wanted the Minnesota & American Hockey players to excel at all levels whether it was Amateur, High School, Juniors or Professional.  At the time when Herb Brooks was scouting for the Pittsburgh Penguins he would always say, ‘Harry was ahead of his time’, in reference to many of Harry’s ideas about high school and junior hockey.  Herb would go into the different USHL Rinks throughout the country and see how well the teams would draw, giving the American  player the stepping stones to play at the next level.  Harry played a big part in making that happen.  Harry’s love for the game and love for his family was felt by all.”

If one were to make a listing of the most influential people in Minnesota hockey history, then Doctor Harry Brown’s name would need to be in a prominent position. Harry was an important force in Minneapolis high school hockey from 1955-1967. Mr. Brown was the head coach at North high school and Patrick Henry high school during those years. 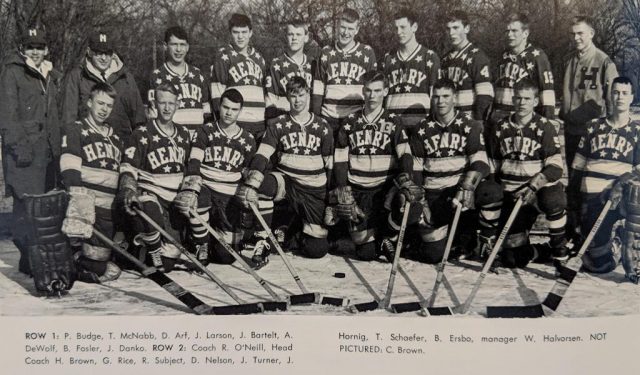 All elite level hockey players owe a debt of gratitude to “Doc Brown”.  He worked tirelessly to expand and improve development opportunities for the high school player both during their careers and after their high school playing days were completed.

The first fall development leagues were founded and run by Harry Brown.  He also was the driving force in establishing junior hockey in Minnesota so that post-graduates would have a further opportunity to develop.

After his years with Minneapolis hockey, Harry went on to serve as the Boston Bruins Head Scout for both the United States and Canada from 1967-1975.

Harry Brown took incredible pride in the eleven children he and his wife raised together.  During this time, he earned a Master’s Degree, completed a Ph.D, and authored two books on hockey instruction.

It is because of visionaries such as Harry Brown, that Minnesota’s hockey tradition is one of the best in all of amateur sports across the U.S.

For the full article and more pictures, just click on this link =>> HERE.

Harry Brown grew up in the apartment above Brown’s Grocery Store on 32nd and Girard Ave So. In his free time, when he wasn’t delivering groceries for the family business, Brown was playing sports, including skating and playing hockey at Minneapolis Arena and Lake of the Isles all winter long. After graduating from De La Salle High in 1941 he brought his hockey skills to the University of Minnesota, skating for the freshman squad in 1941-42.  Brown then served his country in WWII in the US Naval Coast Guard.  Brown returned from the service and completed his education at the University of Minnesota, graduating in 1949.

Brown then began a 35-year teaching career in Minneapolis where he also was able to coach varsity hockey at Henry, Vocational, North and Roosevelt high schools.

Brown was also a pioneer in the Minnesota high school hockey system and was instrumental in bringing (& winning) a lawsuit against the MSHSL which would allow high school hockey players to practice, develop and compete in the off season.

Brown’s hockey acumen was, however, recognized far beyond high school coaching.  From 1967 to 1975 Brown was a Scout for the Boston Bruins.

During these very busy years, Harry raised 11 children in Minneapolis with his wife Mary.  All 11 children graduated from Roosevelt high school.  He also earned a Doctorate in Philosophy from the University of Minnesota in 1970.   Harry then decided to share his hockey knowledge by publishing two instructional hockey books – “Ice Hockey Skating, How To Develop Power And Agility In Skating” and a “Goaltenders Guide”.

Harry was a powerful advocate for improvements in several hockey programs and organizations.  He worked tirelessly to provide opportunities for hockey players at all levels in Minnesota.

He was an active supporter of the Minneapolis Junior Bruins and St. Paul Vulcans well into the later years of his life.  He received the Team Voyageur Friends of Hockey award in 1996 (presented by Herb Brooks) for his contributions to Junior Hockey.

In 2012, at the age of 88, Harry was inducted into the Minnesota High School Hockey Coaches Hall of Fame.  Harry passed away in April of 2014, leaving an impressive mark on the state of Hockey.

For the full article and more pictures, just click on this link =>> HERE.