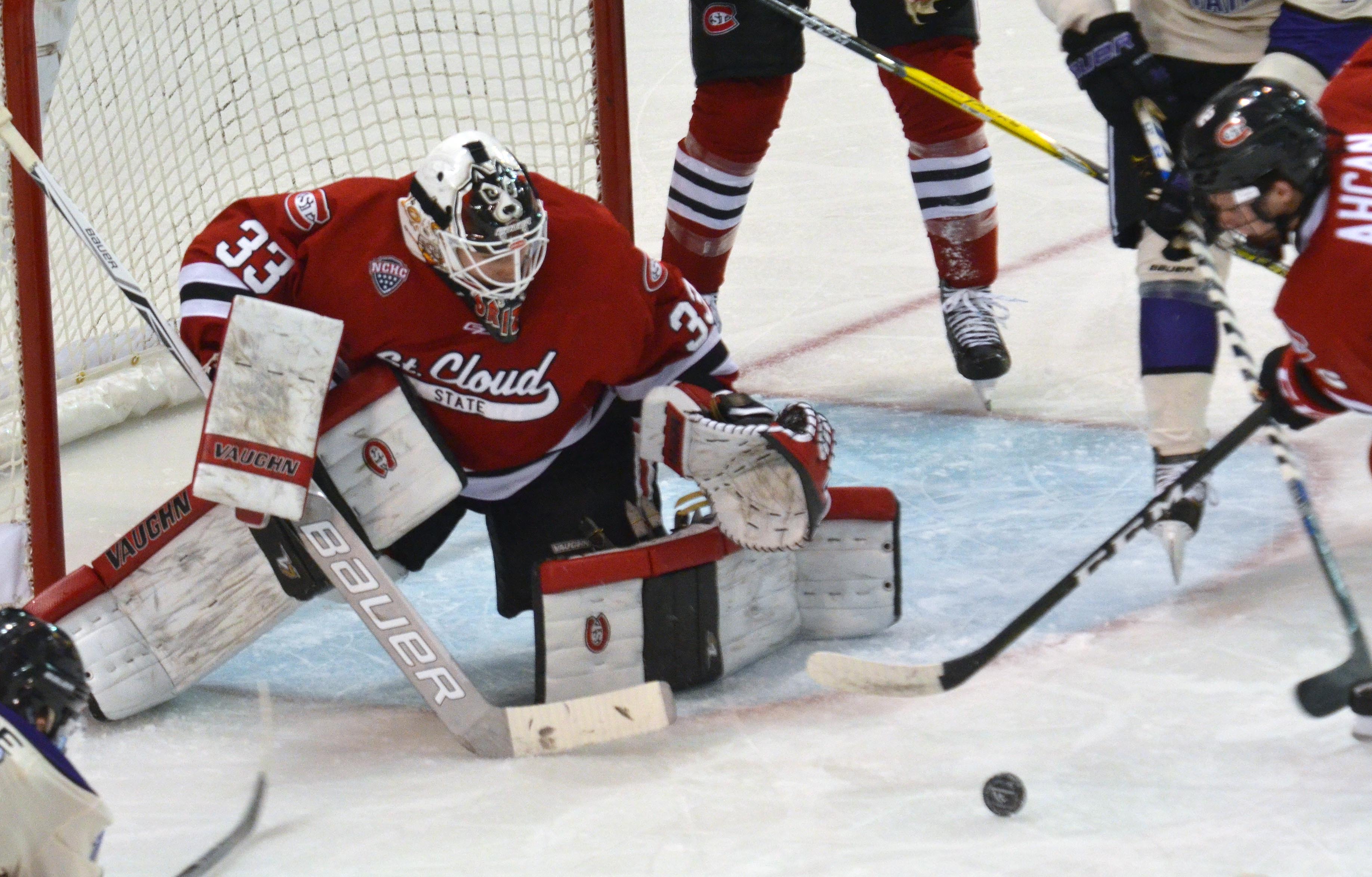 ST. CLOUD — It had been a couple of years since Zach Driscoll caught a Gophers game at Mariucci Arena, but this time, he watched from a different seat and he wasn’t wearing maroon and gold as he used to.

The kid from Apple Valley said he fulfilled the obvious obligation to ditch his Minnesota hockey season tickets as soon as he committed to play goaltender for in-state rival St. Cloud State.

“I had those tickets since I was four years old and knew what hockey was,” Driscoll said Saturday night after his second collegiate victory.

Friday night in Minneapolis, Driscoll turned from spectator on the bench to stabilizer in net when he entered the game in relief of SCSU starter Jeff Smith the third period with his Huskies trailing the Gophers by three goals.

He didn’t need to do much to stop the bleeding, outside of a sprawling save right after he took over, and finished the game with two saves as the Huskies completed a 6-5 overtime comeback win.

“I didn’t get too much action Friday, but for my confidence, playing at Mariucci, that was big and that translated to tonight,” said Driscoll, a freshman who spent last season at the junior level with Penticton of the BCHL.

“It was just a great all-around effort by our guys. Once I got in there, the ice totally shifted.”

The battle for SCSU’s No. 1 goaltending spot has taken a turn and it appears Driscoll is in control after his performance in Game 2 of the weekend series at home in St. Cloud.

Driscoll allowed two goals to Minnesota in the first period, but stopped the final 22 shots he faced as the Huskies overcame another multi-goal deficit to win 3-2.

Saturday was a more eventful night for Driscoll, finishing with 29 saves and surviving a mad scramble by the Gophers with a power play for the final two minutes.

“That was a crazy last couple minutes, but our penalty kill did a great job and all four guys bought in,” Driscoll said. 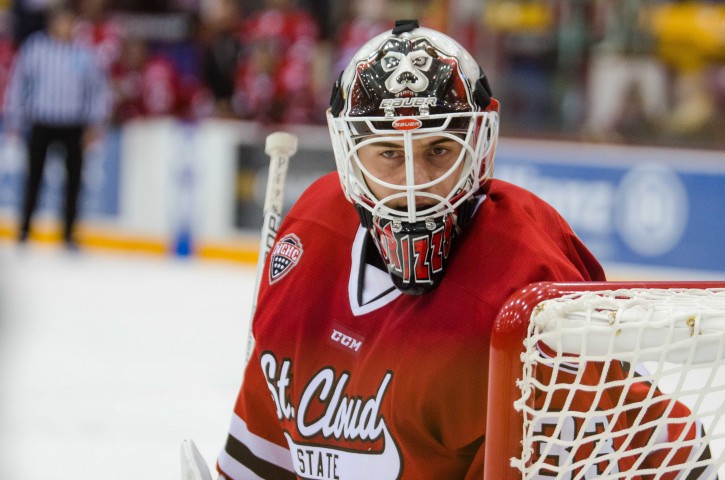 Driscoll was a two-time all-conference goalie at Eastview, helping the Lightning reach the Class 2A state tournament in 2013. He made his rounds in the junior ranks after he graduated high school in 2015, spending time in Austin (NAHL) and Omaha (USHL).

He landed in Penticton last season, and that’s where he began to shine at a higher level with a .933 save percentage, 1.90 goals against average and a 21-4-0 record.

When Charlie Lindgren, a three-year starter in goal for the Huskies, signed with the Montreal Canadiens following SCSU’s loss in the NCAA playoffs, a wide-open competition broke out among three goalies unproven at the collegiate level.

“He’s a tough goalie to replace, obviously, but in terms of coming in and playing, nothing’s ever handed to you,” Driscoll said. “Whether it’d be competing with Lindgren or competing with Smith and Zevnik, you work with what you’re given, so I don’t think it would really matter who it was. You always have to compete.”

Smith, a sophomore transfer from Massachusetts-Lowell, struggled in six games for the River Hawks in 2014-15. Last season, he returned to Powell River, the junior team for which he earned the BCHL Goalie of the Year award in 2013-14.

David Zevnik, a three-time all-state goaltender for St. Thomas Academy, who led the Cadets to three Class A titles didn’t see any action last year as a freshman and hasn’t played this season.

The season-opening series at Minnesota State is one both Smith and Driscoll would probably rather see erased from the record books.

“The three of us push each other really hard in practice and that’s the best that all three of us can ask for,” Driscoll said. “When you’re competing every day and enjoy the guys you compete with, it’s a recipe for success.

“We’ll continue to push each other and support each other throughout the year.”

Like both games against Minnesota, the Huskies faced early deficits, only then, they didn’t recover.

Smith got the nod in the season-opening game against the Mavericks, allowing four goals on 24 shots.

Driscoll started the second game in Mankato but was pulled halfway through when he allowed his fifth goal on 22 shots. Smith took over and made 10 saves on 11 shots.

“We are a young, young hockey team and we have such a long way to go,” SCSU coach Bob Motzko said after Saturday’s game. “(Driscoll) gives up five on 22 shots a week ago and then he bounces back. I think it helped that he came off the bench Friday (at Minnesota).

“We didn’t have to tell him the day before (that he was starting). You know, just go play. That helped him settle in.”

Though it’s too early to award anyone the No. 1 spot, Driscoll might’ve given the folks in St. Cloud a better feeling about the goalie situation than it had going into the weekend.