Dubnyk looks sharp in his return 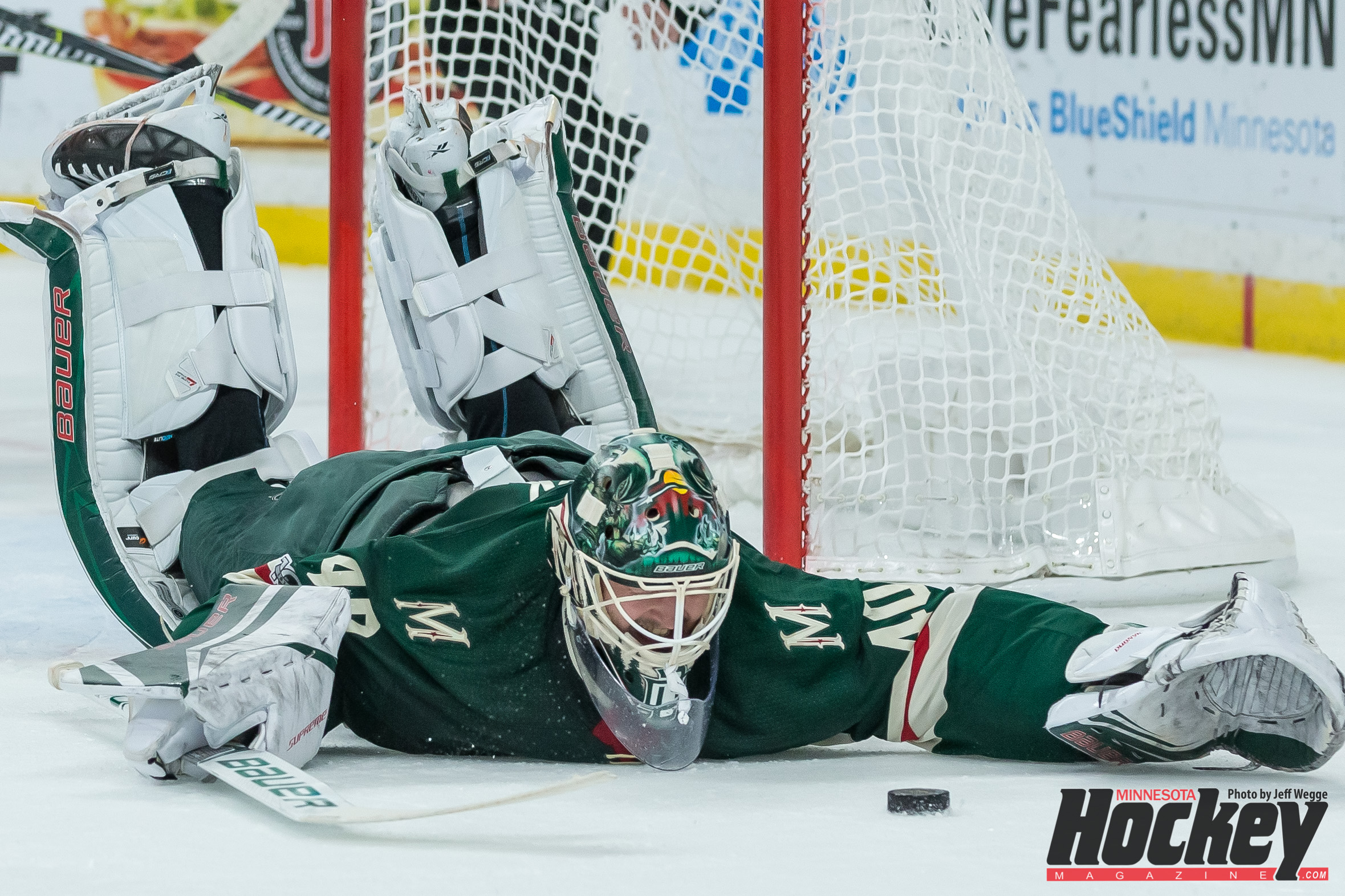 Minnesota Wild goaltender Devan Dubnyk didn’t skip a beat in his return to the ice on Friday night against the Nashville Predators. After missing the last seven games with a lower-body injury, Dubnyk made 41 saves on 43 shots in the Wild’s 4-2 win against his former team.

In case you forgot, Dubnyk was in the Predators organization for two months during the 2013-14 season. After being traded from Edmonton, he made just two starts for Nashville. Eventually, the Predators demoted him to the AHL and even ended up trading him to Montreal, just two months after acquiring him.

Friday’s win was Dubnyk’s fifth-straight victory against Nashville, improving his career record to 12-6-2 against his former employer.

“Little bit of nerves, but not really,” said Dubnyk when asked if he was nervous for his first game back in two weeks. “I was kind of happy where I was mentally; then I stand around for the first eight minutes of the game and watch the guys go to work.”

Minnesota had a strong showing on both sides of the ice in the first twenty minutes, as Nashville didn’t register a shot on net until the 7:57 mark of the first period. Meanwhile, Mikael Granlund put Minnesota on the board first. Shortly after, P.K. Subban sneaked a wrist shot underneath Dubnyk’s arm, but the Wild skated into the first intermission up 2-1, thanks to a second goal from Granlund.

“Coming back, you don’t want to be jumping at pucks and hoping for pucks to get to you,” said Dubnyk. “You just have to wait and allow that first shot to come whenever it does. That was probably the best start we’ve had in a long time.” 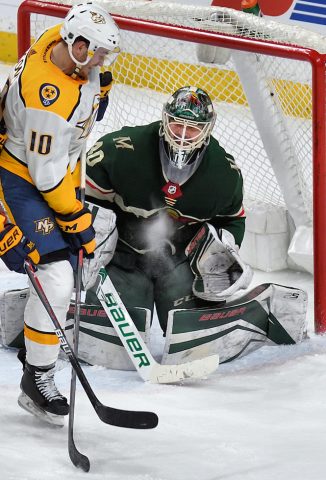 Devan Dubnyk with one of his 41 saves in the Wild’s 4-2 win over Nashville on Friday night at Xcel Energy Center. (Photo by Russ Hons)

However, the Predators had a much better showing in the second period. During the first 10 minutes, Nashville outshot Minnesota 12-2 – and put on 18 shots by the end of the period – but Dubnyk was a brick wall. He robbed Ryan Johansen with a slick-glove save, absorbed a big blast from Subban and stopped Kevin Kiala on a breakaway too.

On the other end of the ice, Wild defenseman Matt Dumba lit the lamp for his seventh goal of the season and the Wild skated into second intermission leading 3-1.

Once again, the third period got off to a disastrous start for Minnesota. The Wild already began the frame down a man, and then unfortunately, Dubnyk slashed Viktor Arvidsson, which gave Nashville a 5-3 advantage for 46 seconds. Despite successfully killing off the two-man advantage, Kyle Turris ended up netting a power-play goal, making it a one-goal game.

As the regulation winded down, Nashville pulled Pekka Rinne for an extra-attacker but they still weren’t able to knot things up. With under a minute to go, Mikko Koivu was able to clear the puck out of the Minnesota zone and set up Granlund for the hat-trick – the second of his career – securing the win.

Although they started slow out of the gate, Nashville peppered Dubnyk with 34 shots over the final two periods.

“After the first goal, you could have thought: first game back, oh my god how rusty is he?” said head coach Bruce Boudreau after the win. “But he made some really good saves. I think it was really good that they had a lot of long shots, that he could get the feel of it back again. He stood tall, he did a great job.”

“I think it was a good game for work wise,” said Dubnyk. “That’s why you keep yourself in shape and train hard while you’re out, so you’re ready for those opportunities.”

With the win the Wild improve to 20-15-3 on the season and occupy a Wild Card spot in the Western Conference playoff picture. Both teams will square up again on Saturday, Dec.30, from Bridgestone Arena in Nashville.