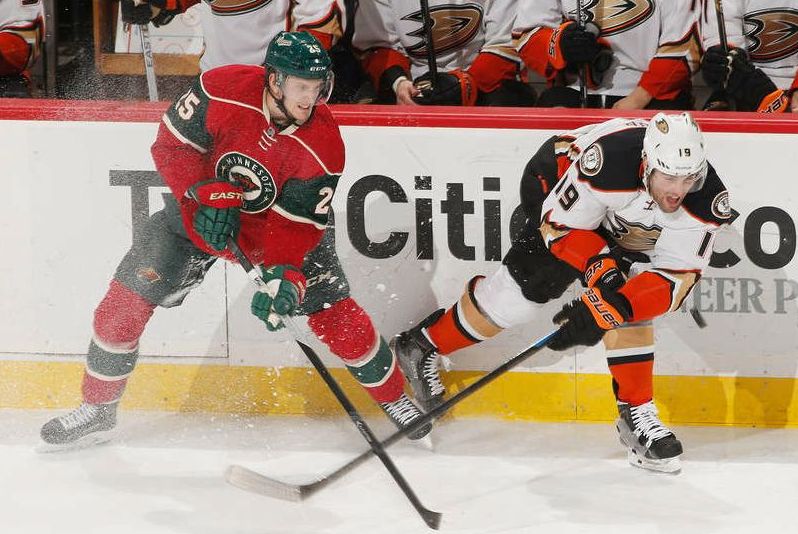 Jonas Brodin #25 of the Minnesota Wild and Patrick Maroon #19 of the Anaheim Ducks battle for the puck during the game on December 5, 2014 at the Xcel Energy Center in St. Paul, Minnesota. Brodin netted his first goal of the season late in the second period to complete the Wild’s comeback from a three-goal deficit in Anaheim’s 5-4 win. (Photo by Bruce Kluckhohn/NHLI via Getty Images)

Just because the Wild take a period off this season, don’t turn off the TV and start crossing things off your list of Christmas chores.

This team somehow has a way of making things interesting.

A lackluster game for 23 minutes made a quick 180 Friday night at the Xcel Energy Center before the Anaheim Ducks absconded with what turned out to be a 5-4 white-knuckle victory.

Darcy Kuemper was the victim of this loss, facing 18 shots and stopping 13.

He felt fine, he said, and some of the Ducks’ goals were worthy.

“But it doesn’t matter if they’re good goals or not, you can’t be letting in five,” he said.

Coach Mike Yeo saluted his team’s comeback to take the lead with four consecutive goals, but added that, in reality, it was nevertheless a loss.

“There’s no reason any of us should feel good about that,” he said.

Wild defenseman Ryan Suter missed his second game because of the mumps, but the Ducks lost forward Corey Perry to a lower-body injury when Keith Ballard upended him with his patented hip check in the first period.

Despite that, this game had the feel of a snoozer as Anaheim constructed a 3-0 lead.

“We can’t start out flat like that,” forward Zach Parise said.

The strangest development: It was the so-far woeful power play that resuscitated Minnesota’s game.

The Wild came into this game 7 for 78 with a man advantage to rank 29th in the NHL, and they failed to click during a first-period power play to make it 7 for 79.

But Anaheim tempted fate in the second period when Ryan Getlaf flipped the puck over the glass from his own zone for a delay-of-game penalty, and 28 seconds later Ryan Kesler – he had scored twice by then – high sticked Parise.

Mikko Koivu made the Ducks pay when he sneaked a bad-angle shot through Ducks goalie Frederik Anderson with the Wild on a 5-on-3 advantage, and 11 seconds later Parise rifled in another power-play goal to make it 3-2 at the 5:10 mark of the second period.

That brought the X crowd of 19,044 to life after a sluggish first 20 minutes in which Anaheim outshot the home team 7-4 and outscored the Wild 2-0.

It was 1-0 just 91 seconds after the opening faceoff after Kesler got loose for a breakaway goal.

“We didn’t have the start we needed,” Yeo understated.

Minnesota finally pulled even on a shot by Jonas Brodin late in the second period, then went ahead 4-3 on Justin Fontaine’s blast at 2:07 of the third.

But Anaheim was not finished, getting a goal from Tim Jackman 80 seconds after Fontaine’s goal and another score from Matt Belesky 8:28 into the final period.

Although the big rally had whipped up the crowd, the Wild did not have another one.

Offered Kuemper: “We battled back good and got in front; it’s tough to give that up.”

This was the third time in his past four home starts that Kuemper has been pulled; Nik Backstrom played the final half of the third period.

Yeo seemed satisfied with his team’s power play and satisfied that his team limited the Ducks to 21 total shots and, he estimated, no more than 10 decent scoring chances.

However, whether this game became entertaining or not, he was not satisfied with how it turned out.

“The bottom line is, if we score four goals we should win,” he said.

Notes: Brodin picked up some of the slack from Suter’s absence, playing 28 minutes, 29 seconds and getting a goal and an assist. … Jason Zucker led the Wild with six shots. … Ballard contributed three hits. … Thomas Vanek had no shots, one giveaway and was a minus-2. Nino Niederreiter, Marco Scandella and Jared Spurgeon were each minus-3.