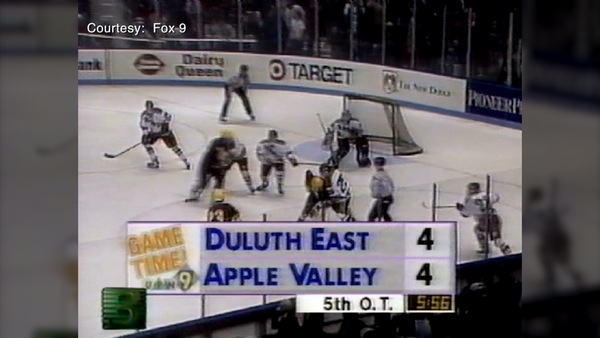 Editor’s note: This story originally appeared in our March 2017 Minnesota Boys’ High School State Tournament Guide, both in the digital and print editions.

On March 8, 1996, the Apple Valley Eagles met the Duluth East Greyhounds in a Class AA semifinal matchup in the MSHSL State Tournament. That night (and early the next morning), the teams combined for nine goals, 114 saves, and the longest game of pucks ever played in the classic tournament.

After the Eagles won in the fifth overtime frame by a score of 5-4 at 1:39 a.m., the game and its participants became a celebrated part of Minnesota hockey history. This is the story of that legendary game in their own words.

Erik Westrum (Apple Valley centerman): “It was almost like a brotherhood or a fraternity of family. We all grew up going to the rink together, going to each other’s houses, playing street hockey or backyard hockey or going down to the park at Galaxie or Hayes Arena all the time … We had a tight-knit team, if not the closest team I’ve ever played on.”

Larry Hendrickson (Apple Valley head coach): “What I discovered is when I would meet with these kids individually, they were some of the greatest kids I ever met.”

Westrum: “Our whole saying or slogan was, ‘Together too long to lose.’”

Hendrickson: “We knew our problem [in facing Duluth East]. Our problem was a guy named Dave Spehar … What I discovered about this Spehar was that he had a great wing by the name of [Chris] Locker. And Locker did all the work getting him the puck, and Spehar was a magician at hiding and then jumping into the play right when Locker was going to make the pass.”

Chris Locker (Duluth East centerman): “We were defending state champs. The only thing we were concerned about, to be honest, was their goalie [Karl Goehring]. We knew he was the only one in the state that could beat us. And we knew it was going to be a phenomenal game.”

Westrum: “We had Karl Goehring. Their goalie played solid, as well, but I think we had the upper hand there.”

Wally Shaver (play-by-play announcer, comments from 1996 game broadcast): “Hello again, everyone. Lou Nanne along with Waldwick Shaver back here at the Civic Center. We’re certainly looking forward to this one.”

Lou Nanne (color commentator, comments from 1996 game broadcast): “We talked to [Apple Valley] assistant coach Pat Westrum and Pat was saying that he felt players were jittery, they’re nervous, they just can’t quite relax. Well, they’re not going to get time to relax tonight.”

Westrum: “I remember [my first goal], I kinda came around and just spun and shot it top shelf. The puck ended up on my stick and it was kind of just a natural reaction.”

Nanne: “What a great shot by Westrum, a good screen by Brad [DeFauw], and an excellent play by Apple Valley to get the goal.”

Shaver: “[Chris] Sikich picking it up on the fly, going into the zone, looking for the trailer, there it is, he scores! Ho, ho, was that pretty.”

Locker: “We were down 2-1. We were getting a little frustrated, obviously, and Spehar took a penalty and we were killing. I remember it plain as day because the D turned the puck over right by the bench, right by the blue line. And I couldn’t believe it that I’d have a shot, actually.”

Shaver: “Here’s a steal for Locker… going in alone… he scores! Shorthanded!”

Locker: “I knew that whatever I did on Goehring, I had to do it quick, and so I had to make a move to avoid a defender’s stick, and then I chipped it up over him in the same motion.”

Nanne: “That’s what they want him out there for … Locker steals it, goes right in and gives Duluth East the tying goal.”

Westrum: “Once I got that first goal, for me, I wanted more to kind of help the team. The second one, I was coming down the left side, took a slapshot, got my rebound and put it in.”

Nanne: “Westrum, who’s made so many big plays for this Apple Valley team, continues to do it.”

Shaver: “[Spehar’s] at the side of the goal, rounds the goal, cuts out in front, he scores!”

Nanne: “You can only keep him off the board for so long, Wally.”

Westrum: “I think we kept Dave Spehar down to one goal that game, probably the only game he didn’t have a hat trick in the state tournament in the two years that he was there.”

Locker: “I think it was the first time in two years, really, where we kept having to come back from behind.”

Westrum: “My last goal … I picked their pocket, came around and stuffed it home. Full-ice goalie shuffle, or whatever you want to call it. It was a moment you dream of, playing in the street. It was pretty surreal at the time. I don’t think I really soaked it in until probably days or weeks after.”

Nanne: “This kid is having the night of his life.”

Hendrickson: “Erik Westrum, that might’ve been the greatest game I’ve ever seen a guy play.”

Dwyer: “I gave up the tying goal. I’ll never forget it.”

Hendrickson: “Dwyer gets the puck and he stands there and he decides he’s gonna flip the puck up in the air.  It hits a guy in the chest, it bounces down and they come in and tie it up with 20 seconds to go.”

Locker: “When Dave touched the puck, all eyes went on him … Once we got it down low, I turned and came down the front of the slot … The pass he made was absolutely incredible and it was just an unbelievable play.”

Westrum: “It’s weird, because I don’t feel like we felt like we were gonna be defeated. We had a confidence and an arrogance that we couldn’t be beaten. I guess we’re gonna have to go into overtime, and let’s get this thing done.”

Locker: “Some days I wish I didn’t tie it, if we were gonna lose. I’m kidding, though. That was pretty fun.”

Locker: “We wanted to score in the first five minutes and capitalize on some of that momentum. Little did we know that it would go on until 1:30 in the morning.”

Hendrickson: “Both coaches are insane. I’m not normal and Mike Randolph isn’t either, so we were playing offense the whole time. We were trying to score all the time, and we would take chances on defense, even in the overtimes.”

Westrum: “Karl [was] making unbelievable save after save. Three-on-twos, odd-man rushes going back and forth. Just like pond hockey. Just like playing at the park.”

Nanne: “That one looked like it hit the crossbar.”

Shaver: “Some [Duluth East] fans booing here… they think it may have gone in.”

Locker: “Matt LaTour, who tipped Dylan Mills’ shot from the point, was the most honest, good kid in the world who doesn’t swear, would never lie. He came back to the bench and his eyes were bigger than silver dollars, and he says, ‘I swear to God that went in.’”

Westrum: “People say it looked like it went in.”

Westrum: “I don’t think either team realized it in the moment. Play continued. It was more of an afterthought the next day or the day after that, ‘cause I think the papers were talking about it, y’know, in the Sunday newspaper: ‘The Goal That Could Be.’”

Locker: “It just wasn’t meant to be, I guess. But that was definitely a goal, whether it counts or not.”

Westrum: “We had a Swedish exchange student and his dad had kind of brought it to our attention to eat bananas or something, between periods or after games. So I remember eating a lot of fruit, a lot of bananas in the locker room, a lot of Gatorade and water.”

Dwyer: “Toward the end of the game, I think we were all gassed. I think it goes into the hard work that both teams put in all year long. We were ready for it.”

Shaver: “Two seconds left… one second left… and we’ve knocked off another overtime. How do you like that, Lou?”

Locker: “There was a time in the fourth overtime where I took a faceoff and my whole body cramped, from my feet to my chin. I struggled just to get to the bench.”

Shaver: “And that’s it. Seven periods of hockey are over.”

Nanne: “I don’t know how long this game could go. The way we’re going here, with the type of goaltending we’re getting, and the chances are getting fewer and fewer because everybody’s so tired…”

Dwyer: “[The game-winner] was a shot from the right point. Sikich was down below the net and I think he was trying to center it. It bounced over a couple of guys’ sticks and it came right to me. I was just inside the blue line above the top of the circle. I took a slapshot and it went bar down and in.”

Shaver: “[Jeff] Przytarski going for the puck, plays it out in front, it hops away from Sikich… but now Dwyer SCORES! It’s over! It’s 20 to 2 and this game has finally ended!”

Westrum: “I remember he skated around the net and I grabbed him by the hips and pulled him down. It was pure excitement and shock, too. I wanted to just get home and go to bed.”

Locker: “It was just a shot and you could see the net pop, and they started celebrating. I was sitting on the bench like, ‘Did that just happen? Really?’ We had gotten to the point where we just thought it was never going to end.”

Hendrickson: “[Dwyer] is one of the heroes of the game because he responded from a mistake.”

Dwyer: “It was bittersweet because I had coughed up the tying goal and then went ahead and scored the game winner. For me, it was more redemption than anything else. I didn’t let my teammates down and we came away with the win.”

Westrum: “Brad DeFauw had to go to the hospital. He was dehydrated. Myself and Karl, we had a ton of water and Gatorade and couldn’t get enough fluid.”

Locker: “I had it the worst on the whole team as far as physical symptoms. I was diagnosed [as being] in the first stages of shock from dehydration.”

Dwyer: “At that point, regardless if we had won or lost [the state title], everyone talks about the Duluth East game.”

Westrum: “It was all it was expected and hyped up to be and that’s why we’re talking about it today.”

Hendrickson: “Our team as a whole, I’m very proud of all of them. That’s the feeling that I carry with me.”

Westrum: “We’re still close, and that’s what I always tell kids in Minnesota. I truly believe kids should stay in Minnesota. You can’t replace this with anything else. Once you get out of high school hockey, it becomes a job. So I think for us, we enjoyed it. It was amateur hockey at its best.”